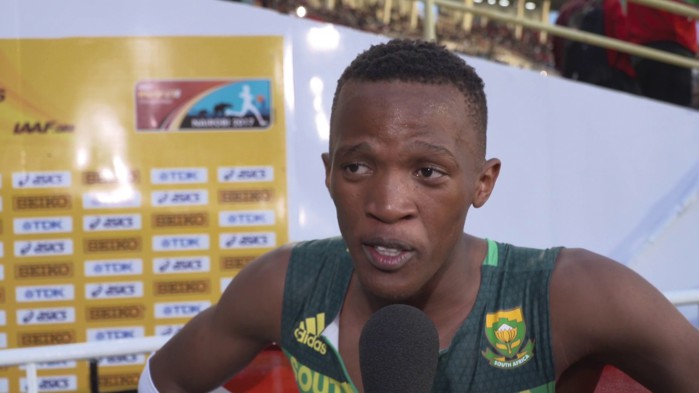 Ten years ago, at the (then) IAAF World Youth Championships in Ostrava, Czech Republic, the South African team finished a lacklustre 22nd on the medal table. Fast forward to 2017 and Team South Africa’s u/18 athletes are sitting on top of the world – literally – having taken the number one spot on the medal table at the recent IAAF World U/18 Championships (as they are now known) in Nairobi, Kenya. – BY REGGIE HUFKIE

South Africa competed in five IAAF World Youth Championship meets between 2007 and 2015, managing to bring home a total of 13 medals across five meets. By comparison, at the 2017 championships, our athletes won a record-breaking haul of 11 medals in a single meet, consisting of five gold, three silver and three bronze medals. This points to the next generation of South African athletes being well on track to emulating the current crop of top South African senior athletes that have been medalling on the world stage, such as Wayde van Niekerk, Caster Sememya and Luvo Manyonga. In the meantime, we caught up with our five newly crowned World Champions.

RETSHIDISITSWE MLENGA
(Boys’ 200m Gold, 100m Silver)
Built lean, more like a long distance athlete than a sprinter, Retshidisitswe’s soft-spoken persona doesn’t look the part either, but on the track he is a different man – and if you saw his roaring celebration after clinching the 200m World Title, you would realise he is not shy to express himself.

In Nairobi, he also showed the world that he does not back down from a challenge, after narrowly losing the boys’ 100m final to his good friend Tshenolo Lemao. “My coach told me that I work 10 times harder than anybody else on that starting line, and when I came second in the 100m and saw my coach’s face, I told myself I can’t let my coach, my parents and my family down.” (He is coached by triple jumper Reneilwe Aphane.)

He duly responded with an even greater effort in the 200m, winning in 21.03 seconds, just ahead of Tshenolo for another SA one-two in the boys’ sprints. “I came into the 200m final very focused, having made a mistake in the 100m final,” he says simply. But ask him for his long-term goals, and he just oozes confidence: “I would like to see myself as one of the best ranked athletes in the world about 10 years from now.”

BREYTON POOLE
(Boys’ High Jump Gold)
Having represented Western Province in gymnastics in primary school, as well as rugby throughout primary and high school (u/12, u/13 and u/16), plus cross country and hockey, Breyton boasts a ‘Poole’ of talent. The 1.73m tall powerhouse believes that anything is possible, and that got him over the bar at 2.24m to be crowned World u/18 High Jump Champion. “All the excitement in Kenya was crazy, and I started celebrating whilst the bar was still shaking, but the joy and relief knowing that I just cleared the bar at 2.24m was an incredible feeling,” he says.

Breyton is coached by Bennie Schlecter and after a record-breaking season and World Championships title, it seems the choice to focus on athletics is paying off for this multi-talented sportsman, who hung up his rugby boots for good in 2016. “I don’t regret choosing athletics at all, and next year I’m hoping to qualify for the World Junior Champs in Finland,” he says. “My long term goal is to go to the Olympics in three years, because I’m still 5cm short of the 2.29m qualification mark.”

TSHENOLO LEMAO
(Boys’ 100m Gold, 200m silver)
His name was written into the history books on a wet evening when he won the IAAF World u/18 Championships100m title in 10.57 seconds, becoming the first South African to medal, let alone win, a 100m at a modern World Championships. “I’ve been working four years towards this, so now I’m ecstatic that I’ve achieved it,” said an ecstatic Tshenolo moments after his victory.

But there was more to come, when he and teammate Retshidisitswe Mlenga also made the 200m final. Having won the 100m gold, Tshenolo was favourite to win the 200m as well, but in spite of a blistering start, it was Retshidisitswe who took gold in 21.03, while Tshenolo posted a PB 21.12 for the silver. While slightky disappointed, Tshenolo was still thrilled that it gave the two South Africans a gold-silver double each.

Having moved from St Andrews in Bloemfontein to the Tuks Sport High School in 2016, Tshenolo’s solid relationship with specialist sprint Coach Thabo Mathebedi from the Grigora Training Group at Tuks could mean still bigger things for him in the sport, especially considering that he still played provincial hockey in 2015. He says he took time to adjust to the move, but it has been more than worth it. “Honestly, it wasn’t easy being in a hostel at first, because being away from home made it more difficult, but having great friends Gift Leotlela and Malisela Senona there made the shift easier. Also, I think my positive attitude played a major role in my success, and that’s the same attitude I approach training with.”

SOKWAKHANA ZAZINI
(Boys’ 400m Hurdles Gold)
Sokwakhana Zazini introduced himself to world athletics when he set a new World Best for u/18 400m hurdles in March this year, clocking 48.84 seconds. Since then, he has been simply untouchable. Given South Africa’s rich history in the single lap hurdles, added to his scintillating World Best, Soks went into the World Champs with high expectations on his shoulders, but none of that seemed to phase him in the slightest.

He cruised home in 49.27 to clinch the World Title, finishing a massive three seconds clear of the next athlete home! “Yes, I dominated the race, and that was great, but people will be wrong to think it came easy. I’ve been preparing really hard since last year, and going through the pain barrier was hectic,” he says about his gold medal performance.

Added to his 48.84 World Best, the Eastern Cape-born sprinter also boasts a 46.20 for 400m, making him one of world athletics’ rising stars. He attends the Tuks Sport High School in Pretoria and trains alongside experienced Olympic hurdlers LJ van Zyl and Wenda Nel, so no surprise that the soft-spoken World Champion is already looking ahead to making it on the senior stage: “My short-term goal is to win the IAAF World u/20 Championship title next year, and my long-term goal is to make the SA senior team in 2019, in the hopes of getting experience to take me to the top.”

ZENEY VAN DER WALT
(Girls’ 400m Hurdles Gold)
Ahead of the girls’ 400m hurdles final, many pundits were sure that the pre-race favourite, Jamaica’s Sanique Walker, would take the title, but that just took all the pressure off Zeney, the Afrikaanse Hoër Meisieskool grade 11 scholar from Pretoria. “I was just focused on the plans coach Maritza Coetzee and I had made, and I knew I have a strong finish, so I remained 100% focused. I knew this would be the last race of an amazing season, and I knew I was 100% prepared,” she says.

Entering the home straight, Sanique had a five-metre gap over second-placed Zeney, but the South African says, “At the 300m mark, I saw I was second and that’s when I gave my best and ran my heart out.” When the Jamaican hit the last hurdle and stumbled, the South African was perfectly placed to grab the win in 58.24, out-dipping the Jamaican by a mere three-hundredths of a second for one of the biggest upsets of the championships. “After the race we had to wait to see the photo finish and as it turned out, it was gold for South Africa!” says an elated Zeney.