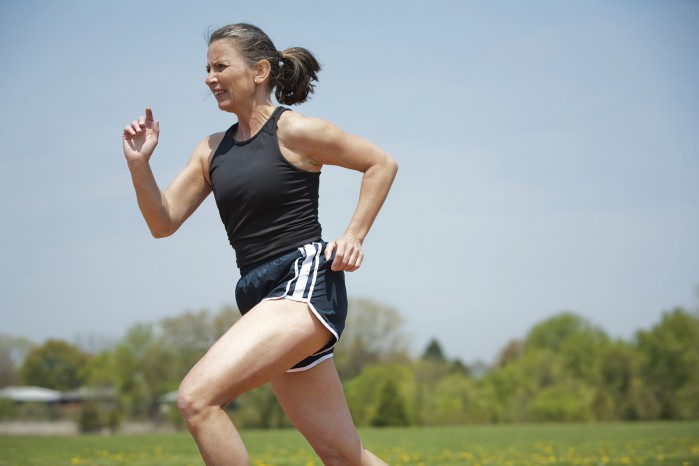 Recently I spoke to a master’s runner who, over the last few years, had noticed a small but steady decline in his running pace, with his strides devolving into shuffles. Despite experiencing no pain and having decades of running experience, his strides shortened and his running speed slowed down. So how does a runner’s body change as they age? – BY ERNEST HOBBES, BIOMECHANIST

As a runner ages, their lung capacity decreases due to a weakening of the diaphragm and reduction of the size and number of alveoli in the lungs. Maximal heart rate slows down by roughly one beat per minute each year, which means that at 60 years of age, your maximal heart rate is around 40 beats per minute slower than it was when you were 20. Since exercise intensity is related to cardiac output (heart rate x volume the heart can pump per stroke), a reduced maximal heart rate will reduce cardiac output, thus lowering maximal and near maximal exercise rate. As a result, running at the same pace will require a higher percentage of maximal effort, while running at the same relative effort will occur at a slower pace.

Flexibility also decreases with advancing age, particularly in connective tissues, such as tendons, as they become less pliable. The muscles also become increasingly inflexible, resulting in a reduced range of motion. This affects the backwards swing of the leg, resulting in an earlier recovery and a shorter cycle, reducing stride length. In a way, this works in tandem with the reduced exercise capacity, as the most economical running intensity is brought a gear down.

Aging results in a decrease in muscle size, particularly in the lower body. In addition, the neural stimulus for muscles to contract activates fewer muscle fibres, resulting in a decrease in muscle strength. Fast twitch fibres, which better accommodate high intensity work, are affected more than slow twitch fibres, which are suited for endurance events. Even though endurance runners rely far more on the slow twitch fibres, fast twitch fibres are also used. As men have greater muscular strength, they also have the most to lose, meaning that women can slowly close the gap on their male counterparts as they age.

Generally, sedentary adults lose fitness and strength much faster than active adults after the age of 30. The exact rate of decline is dependent on age, activity level and forms of exercise the runners participate in, but it is estimated that runners slow down between 0.2% to 1.4% per year. As age advances, the rate of decline increases.

There is some good news, though. As a previous article of mine explained, running economy continues to improve beyond the age of 30 due to a constant improvement in running technique. Studies have found that running economy at 40, 50, and 60 years of age show no observable decline. There are a few things runners could do to slow the rate of decline, and my next article will focus on this as well as the risks of activity at an older age.

About the Author
Ernest is a biomechanical, video, and running gait analyst at the High Performance Centre (HPC) of the University of Pretoria.