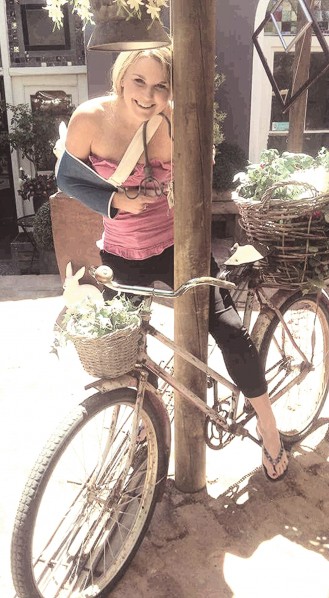 Fallon Finlayson is a 31-year-old graphic designer now based in Somerset West in the Cape, who lives by two motivational sayings: My only fear is not trying, and if your goals don’t scare you, they’re not big enough… which is why she went from the couch to the IRONMAN 70.3, and intends going still further…

Triathlon and fitness is an absolute passion of mine, but it has not always been this way. Growing up in Zimbabwe, my absolute worst nightmare was having to attend sports days at school. I literally hated it. The only thing I enjoyed was swimming, and I didn’t understand why I couldn’t just swim? This running thing was not for me, in any way! During compulsory cross country, I would sit under a tree and only do one lap of the two-lap route, and catch up with everyone on their second lap. I was also quite an unhealthy eater and loved all the junk food. All in all, I was quite an unfit, unhealthy and overweight teenager – and I just accepted it and carried on with my life.

Finishing school and moving to South Africa to study, I lived the typical student life. Lectures, parties, late night garage pies, student burger specials, and a bit of studying. A healthy life was the last thing on my mind! However, once I started working in Johannesburg – some would say grew up – I decided it was time to get healthier, and so I did the normal thing and joined a gym. I attended classes about five times a week, but the real turning point was the day my sister phoned me and invited me to swim the Midmar Mile with her company team. Having been such a keen swimmer a few years earlier, I agreed immediately.

I got into the pool that evening to start training… and battled to swim even two lengths of a 25-metre pool! I was out of breath and my chest was on fire. “How am I battling to swim?” I asked myself, but the answer to that question was obvious, after not swimming for about five years and not worrying about a healthy life. But I was committed to swimming Midmar, and after a few weeks of training, I was comfortable in the water again. Slow, but comfortable, and it felt good.

The Running Bug Bites
I completed Midmar and absolutely loved it. I also lost about 5kg during all the training, and after the event, I remember thinking, “Now what?” I loved the transformation, getting fitter, completing an event and the bonus of the weight-loss, so I decided to try running, as I knew I would definitely lose more weight. Let’s just say that my first attempt at running is a day I will never forget. I could barely jog 200 metres, I was so out of breath, and I’m sure my heart rate was well over 200! I felt nauseous and wanted to throw up, but I persisted as I jogged and walked around the block. It was mentally and physically very challenging for me, but again, I decided not to give up.

Another day I’ll never forget is when I jogged around that same block without stopping, a huge achievement in its own right. That is where my passion for running began, leading to 5km races, then to 10km and from there to my first half marathon. I had absolutely fallen in love with running. By this time, I was also a healthier eater and had lost another 8kg. I felt totally energised with life.

Then came the devastating day. After a few weeks of hip pain followed by a few physio’s, an incredible chiropractor, a podiatrist, gait analysis, and a sports doctor, I was told I had a badly misaligned pelvis, which would take anything between eight months and a year to realign and get my piriformis muscle to settle down. The news of no running for eight months or more came down like a ton of bricks. I was crushed.

I carried on attending my aerobic classes with my favourite instructor and kept all movements low-impact, but I was not getting the satisfaction that running gave me. That’s when I decided to buy a road bike and I entered the 94.7 Cycle Challenge. I was craving some sort of physical endurance challenge, so training began, and six months later I completed the race. Another thing I never thought I’d ever be… a cyclist.

Getting Going Again
By that time, eight months of no running had passed and I was given the go-head to attempt a jog. Happily, it was pain-free, but I was still told by the specialists that it was highly unlikely I’d ever be able to run long distances again… and I almost accepted that. But I didn’t, and after six months of running again, I had a bit of a light bulb moment: “Hey, I can do a triathlon now!” Some quick research showed that the next big triathlon event was four months away, the 11Global in Sun City, so I immediately entered… and then thought, “Eek!”

I basically had no triathlete friends in Johannesburg, and I had no idea what was in store for me. No idea! But I did some research on the Internet about training for beginner triathletes and then I ‘just winged it.’ Typically, I went on to do the 11Global with a few pulled tendons on the top of my foot from the increase in training. Even so, I had an incredible time, and as I finished, I remember thinking, “I loved that, so I’m definitely going to do another one.”

I have never looked back. Being a triathlete makes me feel so alive. Pushing my body, testing my limits and what I am really capable of doing, achieving what a few years ago I would have called absolutely impossible… and soon I was entering my first Ironman 70.3 in East London, in January 2016. I was so excited! I trained very hard and I was loving the journey, and by this time my high school friend was also into triathlons and we planned to do the event together.

Reason to Tri Harder
Then, came the heart-breaking news just two months before the race that my father had died from a massive heart attack. As a very close family, this really took its toll, but I decided I was not going to give up on 70.3, and instead I decided to race the event in honour of my Dad. But then came another devastating blow, just two and a half weeks before the race when I was involved in a bike accident, cracked my elbow pretty badly, and was ruled out of Ironman. I was absolutely heartbroken, as this was now more than just a race for me.

Six weeks of recovery and no training followed, but then I was back in the water with only two weeks to cram in some training before my second go at the 8 Mile Challenge at the Midmar Mile swim. Most people told me, I’d never be able to complete all 8 miles with my elbow joint still recovering, but I like a challenge, so I went and completed all eight miles for the second year in a row.

A year later, a few triathlons, a marathon, several sea swims and cycle races later, I still had the desire to do the Ironman 70.3 in my Dad’s honour, so this year, along with three special people in my life, I completed Ironman 70.3 Durban. Thanks to hard training in spite of three injuries in the year, and the support from these guys and my close friends and family, it was an absolutely magical race. I had a good swim, overcame three punctures on the bike, and then posted a pretty decent run, but finishing for my Dad, with tears in my eyes, was an absolute priceless moment. We won’t talk about the toenail loss and insane blisters, because it was all worth it!

Inspirational Message
I want this story to motivate other athletes, because if you want to do something, it is never too late. Don’t wish you had tried, or wonder what it would have been like. If you want to achieve something, go and do it. Even if others doubt you. Do it for you, not for anyone else. Put in the hard work and you won’t regret it, because nothing that is worth it comes without effort and hard work.

As I always say, set a goal that is so meaningful that it creates a drive inside you to become better and stronger. Then go after it. And believe me, you can do it – I am proof of that. If it’s your dream, go and do it. It will be an incredible journey and something you will never regret!