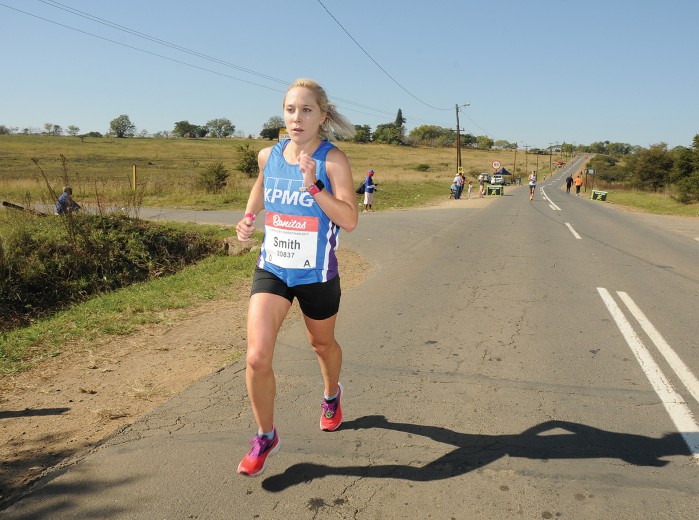 In April this year Stellenbosch-based school teacher Danette Smith travelled to Durban to participate in the SA Marathon Champs, and having taken the lead around the 30km mark, she powered her way home to claim the women’s title in 2:54:59. Then in June she finished eighth woman in her debut Comrades Marathon, to become just the ninth women to win the SA Marathon Championship as well as a Comrades gold medal. That saw her join a star-studded list that features Charne Bosman, Colleen de Reuck, Frith van der Merwe, Grace de Oliveira, Rianna van Niekerk, Lindsay van Aswegen, Helene Joubert and Beverley Malan (who was fourth in the 1987 Comrades and earned a bronze medal, but would earn a gold medal by modern standards).

However, Danette has another SA title to her name, which gives her an unprecedented ‘Treble’ that no other South African female athlete has achieved. In 2014 she won the SA Long Distance Trail Championship title, meaning she is the only woman to win both these SA titles as well as a Comrades gold. In fact, she is the only woman to win both a road running and trail running SA title along with a Comrades gold. But as is her way, the 29-year-old runner who is sponsored by KPMG, Brooks, TomTom and Superbar, sheepishly grins and tries to talk down her achievements when this is mentioned.

Unexpected Win
“To be honest, it wasn’t my goal to win the SA Marathon Title, and Durban came as a big surprise,
given that Comrades gold was the plan. I consider it a massive gift given to me in an already incredible year,” says Danette. And incredible about sums it up: She was second in the Bay to Bay 30km, won the Red Hill Classic 36km, ran a PB 1:21 at the Western Province Half Marathon Champs, was second in the Cango Marthon with a PB 2:49, was second in the mixed pairs category at AfricanX with JC Visser, ran a 10km PB of 37:24 in the Spar Women’s Race in Cape Town, then won the SA Marathon title – even though her coach, Ernie Gruhn, had told her not to race too hard in Durban.

“My main reason for wanting to run the Champs was to check out running in Durban and better prepare myself for Comrades, plus I needed another long run anyway, as I wasn’t running the Two Oceans this year, but Ernie told me I was not to go faster than 2:55 pace, to save my legs for Comrades. However, I was so honoured to be selected by Western Province and still wanted to do my best… but I never went there with the intention to race it as hard as possible. In fact, I thought I would be lucky to make the top 10!”

“The Champs race was two laps of 21km, but I didn’t listen to the announcers properly and didn’t know this. After the start I had no idea where I was in the race, until a spectator told me around the 15km mark that I was fourth lady. Then when we ran past the stadium at the end of the first lap, I realised we had 21km runners with us, because they turned off. Just after that the Western province team manager told me I was in second place. The route also had a long stretch on the Durban Promenade, and my KPMG clubmate Jenna Challenor was doing a long training run at the same time. When I passed her, she told me the leader was just a few hundred metres ahead of me, so I put in a surge, caught her at 28km, then took the lead. Ernie had told me not to run too fast, but being in the lead sparked the adrenaline. Suddenly I found myself wondering what to do when I reach the finish, how to act or celebrate! Winning was just so completely unexpected.”

Taking on Comrades
A few months later, and with her target splits written on her arm, Danette lined up for what she describes as an emotional Comrades start. “I just wanted to enjoy the experience of all the sites and sounds, and it was amazing to have my parents and my boyfriend there to support me along the way. I stuck to my plan as much as I could and I was lying seventh for a long time, until halfway, but then I felt an old injury flare up a bit and was passed by two girls. Now I was really feeling the pressure, because I was almost out of the gold medals!”

“I was being seconded by KPMG’s Pierre Jacobs and KPMG clubmate Colleen De Reuck’s husband, Darren, so I was getting feedback as well as nutritional support. Round about the 75km mark, I passed Stefanie Smith, who was cramping, and then Pierre and Darren told me I was safe, that I could just enjoy the rest of the way. I still had Polly Shortts to climb, and Ernie had told me I can walk four times during the race – he even gave me the exact number of steps I may walk – and because I had only walked once up to that point, I used all three remaining walks on Polly’s. Running into the stadium was just amazing, and I had to laugh when a guy said he was going to stay with me because he wanted to be on TV. Getting that rose was so special, because I had told friends I had actually imagined it so many times. Just an amazing day!”

Unsurprisingly, given the national prominence of the Comrades Marathon, Danette says she has gotten the most reaction from friends, family, colleagues and pupils due to her Comrades gold, and much more so than her two SA titles. “People only really focus on the Comrades result. The trail title happened and passed, the marathon title happened and passed, and people only tend to talk about the Comrades gold, but it is still wonderful that so many people care. The reaction I tend to get is emotional from people who have known me for many years, because they say they feel they have followed my journey and shared in my success.”

Trail versus Tar
Danette’s running has taken a few interesting turns over the last four years. In 2014 she turned to trail running to get stronger in order to benefit her road running, but when she won the SA trail title and qualified to represent SA at the World Long Distance Trail Champs in the USA, she understandably put more focus on off-road. At the Worlds, she finished 28th overall amongst the women, and fourth in the 25-29 age category, so got onto the stage at prize-giving, and she describes it as a tough but amazing experience.

“My next goal was the Sanlam Cape Town Trail Run, where I finished third, and my then coach, Jacques Janse van Rensburg, suggested I run the Sanlam Cape Town Marathon the next day just to experience a marathon. It was also the SA Champs Marathon for that year, but I had obviously not been selected for the Western Province team because I had not run a marathon before, but I ran a 3:01 and finished third Western Province woman in spite of not racing it hard. Jacques then suggested I run the 2015 Old Mutual Two Oceans Marathon, as he thought I was better suited to ultra distance, and I finished 12th in 4:10, and was first Western Province woman home. The rest of 2015 was relatively quiet, I think because I was a bit tired overall, but in 2016 I was 12th again at Two Oceans.

Later that year Danette was back on the trails, finishing fourth in the Hout Bay Trail Challenge 65km, which doubled as the 2016 SA Ultra Distance Trail Champs. Her goal was to qualify for the World Ultra Distance Trail Champs, but in the end the SA team was not sent to Spain. Still, the long run did prove useful. “I also wanted to use it as a tester to see how long I can run, to see if my legs can handle the time needed for Comrades. It took me 10 hours to finish and was very tough, but I felt OK, so when the SA team was not sent to Worlds, I changed my focus to the Comrades for the rest of the year. I still used shorter trails to build my strength, but from November I put my foot down on the road mileage.”

New Challenges
Looking ahead, Danette says her running focus for the remainder of 2017 will centre on races, first the Sanlam Cape Town Trail Run in September and then the Old Mutual Soweto Marathon in November. “I’m really excited about Soweto, as it will be my first race at altitude since the Trail World Champs in 2014. After that my focus will turn to the 2018 Two Oceans and Comrades, and I’m also really excited about running Oceans again, because next year it’s not as close to Comrades, so I can do both, and I want to go for a sub-4-hour time and a top 10 position. Also, at the back of my mind I’m wondering about the World 100km Champs… I would be really honoured to represent my country again if we were to send a team of women, and think I have the strength for the distance. I’m curious and motivated for next year, and excited to see what I can still achieve in running.