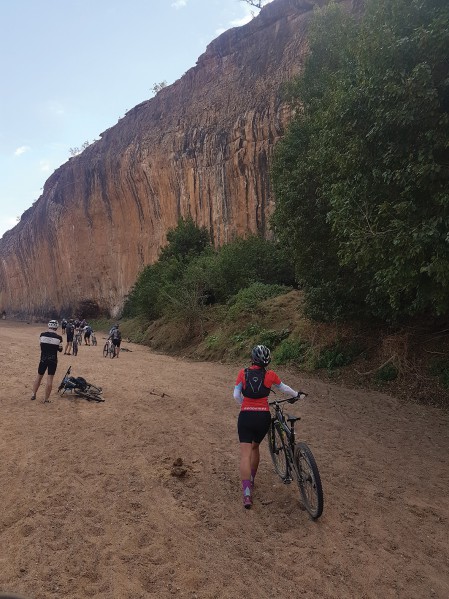 We runners sometimes think that our running fitness will see us through any physical challenge, but sometimes we learn the hard way that skill and experience on top of fitness are an even better idea… as I found out during the recent Nedbank Tour de Tuli mountain biking event. – BY KIM STEPHENS

In 2012, one of the clients on my books was an outdoor apparel brand that happened to be the sponsor of the African Otter Trail Run, and thus I was offered an entry to the ‘Grail of Trail.’ The Otter is South Africa’s premier marathon distance trail race, and it is relentlessly tough. I hadn’t even run a marathon on road, but I found myself enthusiastically accepting the entry, and promptly purchased a clunky pair of trail shoes and badly-fitted hydration pack.

I ran a few long trails, none of which were appropriate to Otter training, and completed my first road marathon, on a flat as a pancake course. Then I lined up for a giant reality check. I completed the Otter well within cut-off, but was totally out of my depth the entire way. I fell, I cried a little, and even briefly considered flinging myself into the ocean… but it changed me. I realised I was, as that tubby yellow bear likes to say, braver than I believed.

IRRESISTIBLE INVITATION
A few months ago my client, Coleman, offered me the opportunity to join its team for the 2017 Nedbank Tour de Tuli in late July. I’d worked as crew on the event in 2013, and knew this isn’t just a mountain biking tour through three different countries, it is also the main fundraising event for Tour de Wilderness, an environmental and life skills programme for rural children living in and around conservation areas. Since that first Otter, I’m annoyingly prone to “seize the moment” choices, and I felt that my endurance base would see me through the 250km of riding. It is a tour, after all, not a race – but it is very much a tour on a bike, and I am very much a runner…

Anyway, I purchased a beautiful little second-hand bike, but it became a crime statistic after just four rides, and I was not in a position to replace it. My training was therefore limited to a couple of spins on a gym bike and plenty of mountain running. And that is how I found myself in the Ciovita showroom in Cape Town, agreeing to become the proud new owner of things like cycling bibs (the very thing I had mocked on my husband numerous times). Upon recommendation, I added a large tube of chamois cream to my kit. At the very least, I was not going into this battle at risk of damaging my nether regions.

Before I knew it I was in a car with my team mates, heading to the South Africa-Botswana border, where my beautiful new Cannondale Scalpel loan bike was waiting for me. A truck took my duffle bag, and I casually requested assistance in attaching the pedals borrowed from my son to this unfamiliar piece of equipment. The 3km ride to the first camp, on an airfield in Botswana, was fairly uneventful, and I patted my new best friend as I hung her on the bike rack and told her that we’d do just fine, but when I met the leaders and sweeps allocated to our team, I’m pretty sure they rolled their eyes as I said, “I’m strong… my running endurance will get me through.”

RUDE AWAKENING
The first day was a 65km ride from the Limpopo Valley Airfield to the Amphitheatre Bushcamp. I applied that chamois cream with wild abandon, and put on a cycling bib with slightly less enthusiasm. I added a pair of borrowed cleats. I looked the part! After a picture-perfect sunrise and great coffee, we were off, each team leaving with 10-minute intervals, and we were team 19, last to leave. The first 15km felt like a shedding of life and work stress. Phones were off, noise was limited to birdlife and the whirrrrr of tubeless tyres on dusty tracks, and we found a rhythm as I bonded with my bike. This sense of freedom was short lived, however. Soon I realised I was probably going to die, face-down in a dry river bed, with a bike attached to my body.

That soft sand made my tyres take on their own personalities, like teenagers with middle fingers in the air! What had I got myself into? My brain was saying “No!” very loudly while I ate sand, and I was using every profanity I’d ever learned. Then we hit rocks, and I swear my pedals smashed into every single one! I wobbled and fell, smashing my right knee on the handlebars. I got off and walked as I swallowed tears. I got told to harden up by sweep Matt, and I wallowed in self-pity. I was holding my team back and felt like a giant fraud. Basically, I was deeply afraid. I quite like my teeth where they are; likewise my kneecaps, and 40km in, after I had shocked my wonderful team mates with a complete 180-degree personality shift, I finally climbed into a Landrover at one of the checkpoints. Gutted, I was just not up for it, and I needed to stop. It was that, or call the lions to eat me. And lions don’t come when called; I did try.

HAVING ANOTHER GO
After plenty of sundowners that went on long past sunset, I crashed into my tent with my kit vaguely prepared for the next day. The exceptional Amphitheatre Bushcamp would be home for two nights, with open air showers, a feast of food and the sound of wildlife all around. It would have been heaven, had I not been panicking about the second day’s riding.

With legs and arms already covered in cuts and bruises, we set off into the sunrise with a river crossing to warm up the legs. After crossing the Motloutse, we moved into open plains on well-used ellie tracks, and we saw elephants each day, including one unnerving experience during day two where we had to backtrack swiftly and warn the other teams! The total distance for the day was just under 60km, and I did it. We were slow, but I was gaining in confidence. The lions came during our second night in the Amphiteatre Bushcamp, their low grunts filtering through to our cozy tents at about 2am, but I told them I wanted to live and would give day three a go, so they moved on.

The route description for day three promised us around 70km of fun, but the race briefing outlined a course closer to 80km. I started with big eyes and a determination to master some of the technical elements that lay ahead. I had such a great team, full of humour and passion. We had two Russians that thought it was the Olympics – still great guys – but the rest were fairly chilled about pace. I’m not sure what the Bush Telegraph had put out, but on day three Jeremy, an equestrian vet from Zimbabwe, appointed himself my personal mentor. “Stay on my butt, watch my wheel, follow my lead.” He led me to the mid pack of our team, and things got real. I was actually riding a bike, at a fair pace, and it was both exhilarating and terrifying.

GETTING THE HANG OF IT
The first section to the tea stop was 95% single track with a lot of mopane trees. Ever been slapped by a mopane branch? They were never-ending, and I prayed for game sightings and a stop to take photographs. My upper lip took a slap, and swelled impressively. But I also wobbled through sand, and even managed to stay on the bike for some of it. Sweeps Matt and Greg smiled at me, and shook their heads. “Like a Lotus flower opening,” said Greg, generously.

But at the tea stop I was overwhelmed by exhaustion; the kind that I normally feel at the end of a race like Comrades. I nervously told Saffy, our team leader, that I needed to stop. He organised another Landrover and in I piled for a very long round trip across the Zimbabwean border into the delightful Maramani Community Camp on the banks of the Limpopo River. I was so tired that I slept through some rough 4x4ing, bouncing around on the back seat, oblivious to my surrounds. I arrived at camp at the same time as my team, and ran in with them, with deep joy as I used my trail shoes for their intended purpose! That night we drank beer on the river bank, beside a sign that said “Beware of crocodiles,” and ate like royalty before another solid tent sleep.

FINAL STRETCH
We woke with mixed feelings: Glad that the end was in sight, sad that our time together was nearing an end. What an adventure. We had all disconnected with reality for a few days… no signal, no work, no admin or deadlines. The final 60km lay ahead, and we were all pretty tired. Rachel, the only other woman on our team and a resident of France on her first trip to Africa, was administering Essential Oils to herself and the rest of us, as we were all battered and bruised and covered in mopane welts. Dieter, our oldest team member (but with the youngest heart and most impressive one-liners) asked a medic how long it would take to die… and with that we piled our weary bodies back on the bikes for one last push.

We’d been promised a sighting of 200 million year old fossils on Sentinel Ranch, among other highlights, and a border crossing back home across the sandy Limpopo River. We all made it, and I owe much of that to a combination of Jeremy the vet and Matt the Macadamia nut farmer who simply would not let me quit. Handing the loan bike back was an emotional moment, and I realised then that mountain biking will become a permanent part of my adventures, as it’s a great way to improve my mountain running, and to see the world. That’s why I’ve purchased that loan bike and had it shipped down to Cape Town. As far as life choices go, this was a good one. But next time, I’ll train.