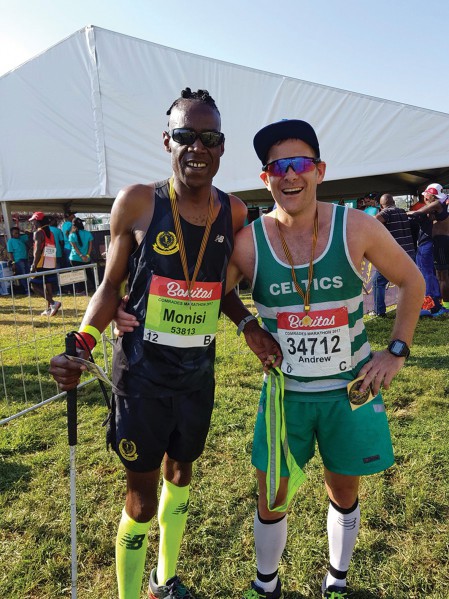 Each year when the school holidays start, the South African news services provide a daily update on the number of deaths on our roads. Most of these deaths are a result of tired or drunk drivers losing control of their vehicles, or speeding and reckless driving, as well as pedestrians run over by vehicles. The rest of the year, that daily counter does not feature in the news, and ‘only’ the particularly gruesome or unusual accidents make the headlines. Unfortunately, when a runner is killed by a car, it makes the news, and tragically, there have been too many such headlines of late. – BY SEAN FALCONER

In the past two months alone, three well-known runners were killed in hit-and-run incidents, once again shaking the running community to its core. On the 6th of June, 42-year-old Nezaam Isaacs of the Lion of Africa Itheko Running Club was killed in a hit-and-run in Claremont, Cape Town. He had weighed 110kg when he took up running a decade earlier to improve his health, and had inspired many with his incredible transformation into a veteran of 17 ultra-marathons. Due to the Muslim Fast of Ramadan, he had taken to training earlier than normal to allow himself time to have breakfast before sunrise. His GPS device showed that he had covered 2.2km in 14 minutes and 18 seconds when he was struck down.

Just four days later, blind runner Malose Richard Monisi (48) died in a hit-and-run accident in Johannesburg. He was walking to the shops, not out running, but his death at the hands of a driver nevertheless rocked the running world, given how famous he had become for his exploits at the Comrades Marathon and other big races, often completing races alone, using his white stick as guide, when running guides could not keep up with him. Just a week before his death, he had run a brilliant 8:38 in the 2017 Comrades, guided successfully by first time ‘pilot,’ Andrew Hall of Celtic Harriers in Cape Town. Richard was a veteran of 13 Comrades runs, and was a former recipient of the Spirit of Comrades Award for his incredible courage and attitude towards running the race.

As if that were not enough, on 4 July news broke that Midrand Striders Men’s Club Captain Leon Baker was struck by a taxi during his morning run in Johannesburg, in yet another hit-and-run incident. He was a talented runner, capable of regularly earning Comrades silver medals and posting sub-40-minute times for 10km, but was better known for the selfless way he would go out of his way to help fellow runners. He had also inspired many with the story of how he took up running in 2004 when his broker told him he would have to pay more for insurance due to being 30kg overweight.

Rising Death Toll
A quick online search for reports about runners killed on SA roads shows that these recent deaths were by no means isolated incidents. What remains one of the most shocking accidents occurred in October 2011 in Midrand, north of Johannesburg, when six runners training for the Soweto Marathon were mowed down by a drunk driver. Geo Tlale, Moroese Mokoatsi, Reneilwe Lesenyeho, Given Mills and Nomvula Dumako were all killed, while Khanyisa Stengile was seriously injured. The runners were members of the Vodacom Striders, Midrand Striders and Goldfields Athletics Clubs. The Midrand Striders still hold an annual memorial run to the site of the accident to commemorate their fallen comrades, which is also attended by Khanyisa, who only returned to running after a lengthy recovery period for both physical and emotional injuries.

In February 2013, 60-year-old Neil Robinson was literally cut in half by a speeding driver that lost control of his vehicle in Pietermaritzburg, and worse, it happened right in front of his partner, Lynn-Rae van den Berg, as they were out training for the upcoming Maritzburg Half Marathon. The driver had lost concentration and drifted into oncoming traffic, then over-corrected and ploughed into Neil on the shoulder of the road.

In another horrific accident in February 2016 in Wartburg, near to Pietermaritzburg, 27-year-old Sithabile Mkhasibe and her boyfriend Xolani Nxele were killed when they were struck by a drunk driver during a Friday evening jog. Both runners’ bodies were picked up and carried further by the car, but while Xolani’s lifeless body eventually slid off the bonnet, Sithabile’s body was pinned against the windscreen and the driver kept going, later dumping her body in a sugarcane field near Dalton. Tragically, she had recently given up a high-paying engineering job in the Eastern Cape to move closer to her family in KwaZulu-Natal. Even though the driver was identified and arrested, her body was only found four days after the accident, because he had been too drunk to remember where he left her!

Also in 2016, top Cape Town veteran Sheryl De Lange (47) of the FNB Multisport Club was killed on 9 September when hit by a car during an early morning training run in Durbanville. She was a top performer for more than 20 years, winning a number of Western Province titles in road running and cross country as well as representing the province at national championships on many occasions. She was actually due to run the South African Cross Country Champs in Middelburg the same week she was killed, having finished second in her age category at the SA 10km Champs earlier in the year.

Run Defensively!
What these tragic deaths show is that the roads in South Africa are not safe for runners, and it is imperative that athletes do their utmost to promote their own safety when out running. While nothing can guarantee your safety, there are some basic tips that may help keep you safer:
1. Always run facing oncoming traffic, so that you can see approaching vehicles.
2. Avoid running with music, or wear just one ear-piece and listen at low volume, so that you can hear approaching vehicles.
3. Wear bright colours, reflective gear or flashing lights when running in low-light conditions. In fact, wear all three!
4. Signal your intentions to change direction or cross a road, much like cyclists use hand signals to notify other road users of their intentions.
5. Try to avoid running on roads that do not have a pavement or shoulder area, which force you to run in the road.
6. When running around a blind corner or rise, assume that a car could be coming and rather be safe by taking the long way round. Better yet, avoid running on roads with these features.
7. Try to make eye contact with drivers, so you know they have seen you. If you don’t see eyes, assume the driver has not seen you.
8. When crossing a road, rather wait till you know it is safe, especially if you are coming up suddenly on cars whose drivers may not have seen you.
9. Watch for danger points, such as entrances to parking lots and entry or exit points to busy highways, where drivers often drive faster or take gaps.
10. Beware high-risk drivers who may be driving under the influence, or may be tired in the early hours of the morning or after a long work day.
11. Assume that every driver of every vehicle is a bad driver, has bad eyesight, is texting on their phone while driving, and has not seen you.
12. Lastly, be courteous on the roads – wave thank you to drivers who see you running and wait for you. That will make them more likely to be aware of other runners going forward.