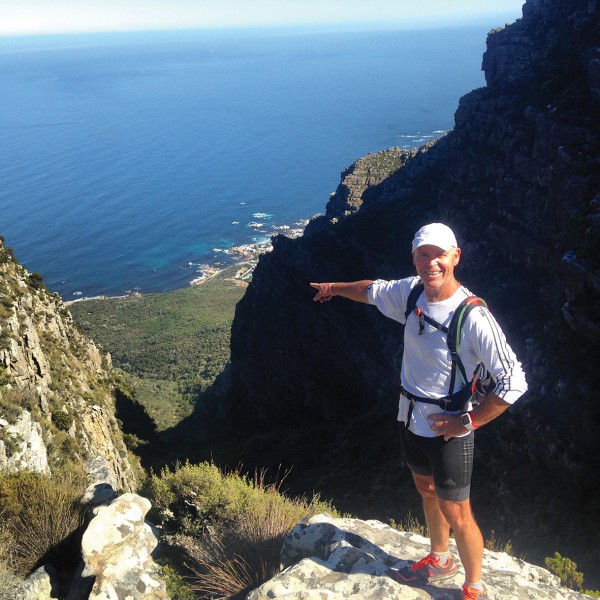 Discovering a love for running helped me to put my life back together again, and I just want to show my appreciation. – BY ERIC MCLAREN

I started running for the first time in my life in June 2015, at the ripe old age of 52. At the time my life had been turned completely upside down having discovered that my now ex-wife was cheating behind my back. I needed an outlet to clear my mind, so I decided to join the local Melkbos Athletic Club here in Cape Town, who welcomed me with open arms. The thought of getting fitter and healthier whilst losing weight and meeting new people at the same time appealed to me, although I knew it wasn’t going to be easy. I formed an instant bond with some trail runners and at the time I wasn’t to know that trail would be the direction I would be heading.

My first outing was a 6km time trial. I put on an old pair of walking Asics, donned a pair of board shorts and a plain cotton T-shirt, and then I set off, pushing the jog as far as I could until the chest started burning. After that I walked a few, then ran a few, and so it went. Eventually I finished with a time just short of 40 minutes. It was slow, but I did it and I felt good. It wasn’t long and I had already shed 8kg in body weight. I was starting to feel better and my times improved gradually. A proud moment was when I went sub-40 for the first time on the longer 8km time trial.

LOVING THE TRAILS
That same year I did a number of Dirtopia trail events and the Spur Winter Trail Series, in which I came third in the Masters Division at the last event. Actually, two of the stronger competitors in my division stayed home that day which opened the door for me to get podium, albeit by default. Still, it was a good feeling, and also the time I started believing in myself. That same year I did the 15km Bastille Day Trail Run, the 24km Matroosberg Challenge (which nearly killed me), and the 20km Cape Town Ultra Trail, where I was second in the Masters.

In 2016 I decided to be more selective in which runs I did, so I entered both the Spur Summer and Winter Trail Series, the 25km Bastille Day and The Beast 32km on Table Mountain. My breakthrough came in September when I entered the three-day Oyster Catcher Trail Run, coming 10th overall on day two and finishing 17th overall for the event. I was on cloud nine, but it got better from there when I finished first in the Masters Division in the 35km Cape Town Ultra Trail in December. I had just recently moved from pancake-flat Melkbos to Somerset West, which has more hills than I know what do with, and having the Helderberg Nature Reserve on my doorstep was an absolute blessing for my training.

This year I completed the AfricanX three-day stage trail run. However, my choice of nutrition on day one almost forced me to quit, suffering severe nausea halfway through the stage. A visit to the medical facility afterwards, where a drip was inserted, had me feeling a whole lot better. A good night’s rest and I was good to go on days two and three, but throwing all my nutrition plans out the window and running solely on water in my hydration pack, and Coke and bananas at water points. It’s back to the drawing board in the nutrition department for me.

Then in June I took on my biggest test to date, the 65km Fish River Ultra Marathon trail run. Although I’d never done this kind of distance in a single day, I was excited, because since 2014 I’d hiked the canyon five times, including a trip just a few weeks before the race to take a good look at the water level and which line to take.

HARD TO BELIEVE
I sit back and think that two years ago I couldn’t even run three kilometres, and now I’m taking on challenges like this, and that’s hard to comprehend. There is no hidden talent, of that I can be sure of. I just start a run saying to myself, “Enjoy it in your own time, you’re not going to win, and take the result as it comes.” What I do know is that I run with a big heart and quitting is the furthest thing from my mind. But most importantly, running has not only given me a new lease on life, I also met my partner, Carine, at last year’s Spur Winter Series. She is my biggest prize of all… Thank you, running!