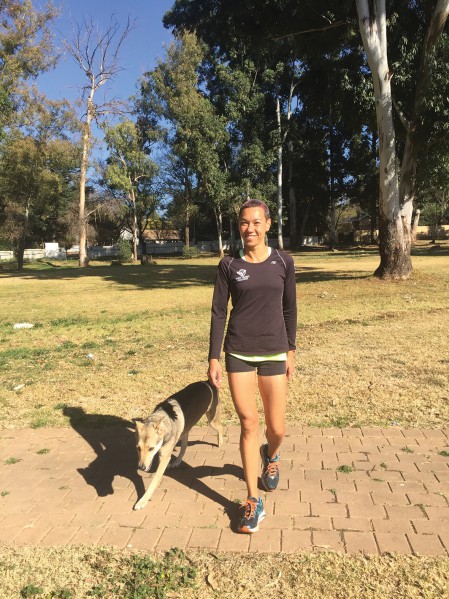 I believe that you should never let anybody tell you that “you will never do this again,” because if you really want it, you can do it. – BY SU-YEN THORNHILL

For the last 10 years I haven’t had an anterior cruciate ligament (ACL). For those who don’t know what it is, it’s basically an essential bit of the knee that holds it in place, and most medical professionals will say that without reconstruction you are looking at a permanent disability, arthritis, pain and muscle deterioration. About 20 years ago I fell down some stairs and went over my knee. As you well know, that joint only bends one way, so you can imagine the agony when I flipped it. I had already ruptured the ACL in a lacrosse injury a few months prior and thereafter my knee would literally buckle and leave me in agony. I had the reconstruction and it was good for 10 years before I tore it again playing netball.

It was then that I moved to South Africa and was introduced to the multitude of outdoor sports available here, including trail running and triathlons. I set my sight on an Ironman and began my journey into the world of endurance training. I was 36 years old, and at first my knee was okay, but on my first 21km run, I overenthusiastically dashed towards the finish and sprinted on tired legs. There weren’t any obvious signs of distress to begin with, but the following day, while I was walking in the supermarket, my knee suddenly felt extremely stiff and within minutes it was swollen to five times its normal size.

LASTING EFFECT
I didn’t give it much thought, as over the years I’ve learned to live with it being a bit temperamental, but after three days of it remaining swollen, and with the Argus Cycle Tour looming in 10 days, I decided to seek advice. After an MRI at the Rosebank Sports Clinic, I was told the only way I could continue training was to undergo a second ACL reconstruction, with up to 18 months rehab, or I would never compete in anything again. I was given a dose of cortisone which reduced the swelling and was told to book in for surgery. I rode the Argus.

From there, I went on to complete my first Ironman, following a number of shorter distance races, got into trail running and to date have completed over 200 races, ranging from open water swims, trail, road, bike and triathlons. I might be pig-headed, but I refused to believe surgery was the only route to recovery. I worked with my personal trainer to strengthen all the muscles around the knee in order to keep it stable, and while there have been a few hiccups along the way, I haven’t allowed it to define me and keep me back. In the last couple of years, I also qualified as a yoga instructor and the improved core strength has also kept me racing.

SHOULD BE FASTER…
From time to time the knee still swells up, but rest, ice and respecting my body has kept me going, although recently, I’ve scaled back my racing as my business has taken off and I don’t have as much time to train. Having podiumed a few times and usually been near the top end of the finishers’ table, I thought I would find it difficult to take things easy. But I did… so easy, in fact, that I’m now often seen walking trail races!

It has been an incredible journey from racing snake to being just another person in the crowd. I had to contend with the ‘judgey’ voice in my own head that told me to push harder, to think about the expectation of those knowing you are in the race and were once a medal contender. Would I be teased from hero to zero? And do you know what? You get just as much of a cheer from the crowds coming last as you do first. You can admire the view and take in your surroundings. You make friends along the way and you are still out there enjoying yourself.

I still like to compete if I’m fit and strong, but I also want to be moving for the rest of my life, and if I have learned anything these past few years, it’s that life is movement… and never let anybody tell you otherwise. Whatever your age, you can still get out there and walk.

About the Author
Su-yen is a Johannesburg-based life coach, medical microbiologist and self-taught chef, as well as an ultra trail runner and Ironman triathlete. She teaches vinyasa yoga and brings to her practice all her life experiences to create an uplifting, soul-enhancing yoga experience. She will also take on any challenge, as she doesn’t understand the word ‘no.’