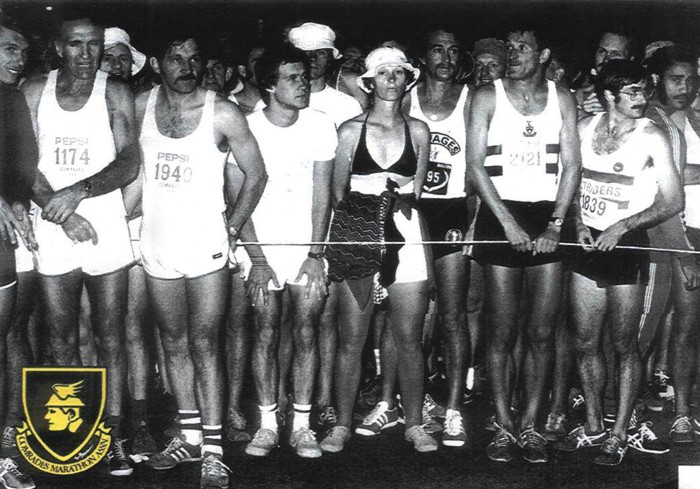 The current generation of South African track and field athletes is setting the world stage alight, but South African athletics has actually been blessed with many great athletes and achievements throughout its history. This includes gold medallists in the early Olympic Games of the 20th century, and various World Records or Bests by ‘greats’ that have long since disappeared into the realms of time, but thanks to Dewald Steyn, their legacy lives on. – BY SEAN FALCONER

Dewald’s detailed five-volume History of South African Cross-Country, Middle and Long-Distance Running and Walking, covers the full spectrum of the sport from 1894 to 2014, featuring an absolute treasure trove of stories, results, stats and photographs. The well-known athletics author says the project was born in 2013 when he realised that it would be a tragedy if the history of SA’s cross-country and distance running was lost to the current and future generations. “I knew that the only way was to actively engage in research and document it,” says the 74-year-old author and statistician.

“It is really important to preserve the history of our sport, because there are current athletes who don’t even know who legends like Fanie van Zyl or De Villiers Lamprecht are. Van Zyl was almost unbeatable in his time, was an amazing strategist and one of the best middle-distance athletes this country has ever seen.”

Furthermore, he decided to do more than just consult the available records and statistics in publications and media archives, but also to speak to as many of the living legends of South African athletics as he could, to get the best stories and photos. “It took four years to complete this set of volumes and a lot of research was put into this. I also spoke to a vast number of athletes, and this opened up a whole new world of information. Most of them had scrapbooks and memorabilia documenting their individual achievements, and those not only served as a wonderful source of information, but also led to further interviews and interesting anecdotes, all of which have been captured in the books. Some of the athletes also generously donated their scrapbooks to be preserved, and I’m still looking for the right place to house these valuable documents.”

Passion for Athletics
Born in 1943 in Sabie, Dewald later studied botany at the universities of Potchefstroom and Pretoria, and his career included posts as a teacher, researcher, lecturer and even Deputy Director at Department of Water Affairs. However, his unquenchable passion for athletics is what defines him. That was born out of being inspired by a speech in Potchefstroom in April 1964 by coach Arthur Lydiard, who was touring South Africa with Olympic gold medallist Peter Snell of New Zealand.

“The very next day after hearing the great man speak, I resigned as secretary of the Potchefstroom University Rugby Club and first team scrumhalf to become a long distance athlete,” he recalls. It didn’t take long for him to make his mark: In 1966 he finished second to De Villiers Lamprecht, South Africa’s first sub-four minute miler, at the South African Universities Cross-Country Championships, and he went on to represent South Africa in cross country against Rhodesia in 1967.

Dewald may also hold the record of the athlete that has represented the most provinces during his long career: He received provincial colours from no less than five provinces, namely Western Transvaal (1964-1966), Border (1967), Southern Transvaal (1968), Orange Free State (1969-1971) and Northern Transvaal (1972-1988), in track and field, cross country and road running. He also earned national colours by being selected for various South African Universities teams, competed in more than 70 South African Championship races, and won the Hardy Ballington Trophy as the first novice to finish the Comrades Marathon in 1975, when he finished 16th in 6:26. He went on to run the Comrades 10 times and earn Green Number 1940, with a best time of 6:25.

Early in his running career, Dewald also became involved in the administrative side of the sport. He served as a provincial secretary, later as a selector and race referee, and excelled as organiser of big meetings, including putting on both the South African Cross-Country Championships and the South African University Cross-Country Championships in 1966. Later he went on to serve 11 years as race organiser of what was then the biggest standard marathon in SA, the Hyper-to-Hyper Marathon in Pretoria, as well as other events. He also managed the distribution of the SA Athlete monthly magazine of the former SAAAU national body from 1973 to 1978.

Helping Hand
Besides his own athletic achievement, Dewald is best known for assisting many athletes from SA and neighbouring countries with coaching, management, bursaries, jobs, accommodation, transport, entries and gear, and many of his athletes went on to win prestigious races or titles, and represent their countries on the world stage, including the Olympic Games, Commonwealth Games and World Championships. “I think some of my favourite moments as a coach and manager was watching Mike Fokoroni of Zimbabwe finishing 11th at the 2008 Beijing Olympic Marathon, and then Namibian Helalia Johannes finishing 12th at the 2012 London Olympic Marathon. Those were really proud days for me.”

He has also sent athletes to 23 different countries in Africa, Europe and Asia, and they have come back with more than 20 international marathon titles. “One of the really unique trips we do is to North Korea. I am the only South African manager who can take athletes to the Pyongyang Marathon, and we’ve been going there for more than 10 years now.

On home soil, his coaching groups have produced more than 50 winners in prestigious races such as the Comrades, Two Oceans, Loskop and Om Die Dam ultras as well as the Soweto, Cape Town and Johannesburg marathons. To make all this possible, he built a room in his own backyard to supply overnight facilities for black athletes from outside Pretoria, obtained and drove a sponsored mini-bus to transport these runners to many races, secured jobs for many of them when their competitive days were behind them, and often paid for the athletes out of his own pocket. Deservedly, Dewald was awarded the Reggie Walker Merit Award by ASA for special services to athletics.

Getting back to Dewald’s incredible books, perhaps the best way of summing up the vastness of the project is best left to Professor Pieter Labuschagne, who not only features in the books as a former great, but is also most famous for having coached Zola Budd and Elana Meyer: “The construction of the various volumes was indeed a mammoth task with the information scattered over the entire country, stored or contained in private collections and much of it dumped in cardboard boxes. But if you need a man with the doggedness of a committed private investigator to achieve this, Dewald is your man. In putting together this collection of information, he has once again made a major contribution to athletics in South Africa.”

Get the Books
Dewald’s book is available on order for R1380 for the entire set of five volumes plus index, or individual volumes can also be ordered. For enquiries or orders, contact dewalds@wordonline.co.za or 082 442 1860.