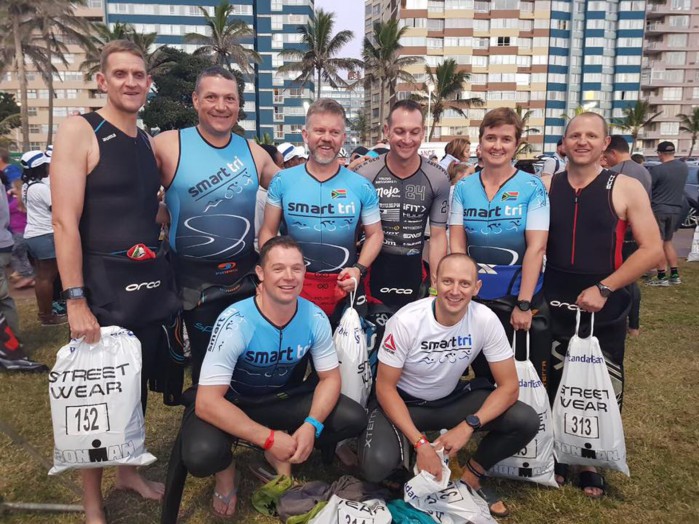 My long journey to becoming a triathlete has been an awesome, life-changing experience that I can recommend to any person. You will never know until you try a triathlon! – BY MORNE HEYSTEK

My journey started in September 2013 when my family went on holiday to Port Edward with my friend Peter Clark and his family, and they asked me if I had a mountain bike to bring with. I replied that I did, but that it had been locked in my garage for three years and needed some cleaning from all the dust… meanwhile, I was thinking, “Who wants to exercise on holiday? They must be crazy.” That first 4km ride was brutal and I kept checking my pulse to make sure I was still alive, but two or three days later I went for a 10km ride and actually started enjoying this cycling thing. The bug had bitten, and when I came home I continued cycling. Rides became longer and easier as Peter introduced me to road cycling, and soon I was entering races.

TAKING THE PLUNGE
Both our kids were swimming open water events and Peter suggested that we join them. I thought, “You must be joking! Swimming? No thank you, not for me.” Then in August 2014 he did the Bela Bela 5150 on his birthday and I went along to support. I was immediately caught up in this thing called triathlon, and by the end of that day I said, “Next year this time I’m doing this.” So I entered a sprint distance event at Germiston and thought if I can cycle and run/walk, I can probably swim. Biggest mistake of my life! Fifty metres into that swim I was basically drowning, but I prayed, doggy-paddled, and kept myself going with the thought, “If I can get through this, I can cycle, and that’s what I love.” I duly walked the 5km run and finished my first triathlon.

Back to the drawing board: I had to learn how to swim and run, so it was swimming five days a week and running on the treadmill for 20 minutes three days a week. Then I entered numerous open water events and 5km and 10km running races, supported by Peter and our wives, and in August 2015 I was standing at Bela Bela, ready for my first 5150 event. I survived the swim, loved the bike and ran/walked the 10km. Nerves got the better of me that day and I battled the whole day with a tummy bug, but I finished – and I loved it.

So what next? Peter suggest the 70.3 Half Ironman distance. “No ways! I will never be able to run 21km. How do people even do that?” I answered… but after completing a number of sprint and 5150 events in 2015, I pushed up the training and entered my first 70.3 distance event in February 2016, as well as the 70.3 Ironman in Durban later in 2016. That’s when s**t got real! I did numerous 21km road races, and got a Watt Bike, and as both my running and swimming got stronger, so my biking was also getting stronger. Loads of early morning runs and bike rides as well as swimming became a daily thing, and I went on to complete both 70.3 events in 2016.

THE ULTIMATE CHALLENGE
And then the question became: “How is it even possible to do a full Ironman distance 3.8km swim, 180km bike and 42km run? No way I can do that!” But my training was on track – running had become bearable and I was hovering at a 6:30/km average, my swimming was good and my bike was strong – so in December 2016 I looked at the three big races on the 2017 calendar and entered the lot: 70.3 East London, Ironman Port Elizabeth, 70.3 Durban! I pushed my training up to 14 hours a week and eventually it was the ultimate challenge on 2 April. I finished in 14 hours 31 minutes, and the best feeling ever was running down the red carpet to cross the finish line and hearing “You are an Ironman!” I’ve got goose bumps just writing about it.

Of course, none of this would have been possible if I had to do it on my own. Firstly, I need to thank Peter for all the encouragement and pushing me beyond my boundaries, and secondly, people sometimes forget the huge role an ‘Ironman wife’ plays – there is no way I could have done all this if it was not for Jacqui putting up with me during the months of training. That said, becoming a triathlete has brought huge bonuses: I have lost 32kg and five pants sizes, and where three years ago my cholesterol level was 6.3, now it is 3.1. I feel great, and long gone are the days where I was out of breath pushing a trolley in Pick n Pay. I always tell people you either love tri or you hate it, but you will never know if you don’t tri, so get off that couch!