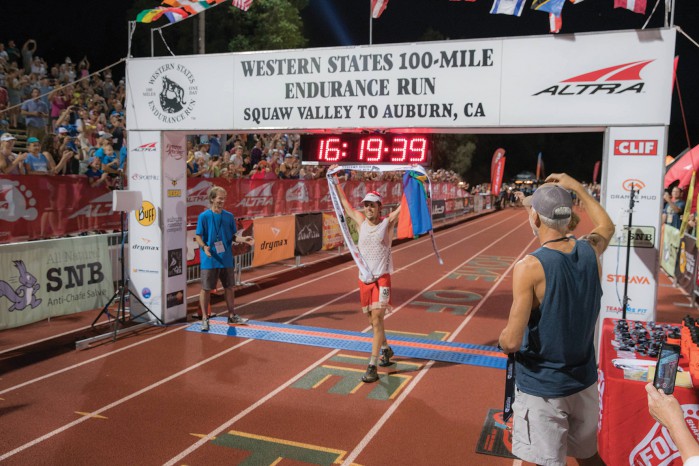 At the end of June, ultra trail runner Ryan Sandes added yet another prestigious win to his already impressive record when he won the Western States 100 Miler in California in the USA, but he had to overcome extreme racing conditions before he could finally claim the win he has been chasing since 2012. – BY SEAN FALCONER

Been there, won it… that’s pretty much how one can sum up 34-year-old Ryan Sandes’ ultra-distance trail running career. He burst onto the world stage in 2008 as he won both the Sahara and Gobi March events, two of the four races that make up the 4 Deserts Challenge. The following year he finished second in RacingThePlanet Namibia, then won the Jungle Ultra Marathon in Brazil, and then in 2010 he added the Atacama Desert and Antarctica events to not only join a very small group to have ever done all four of the big desert races, but become the only runner to have won all four of these gruelling 250km, six- to seven-day events.

More titles followed in the next few years. In 2011 he won the Leadville 100 Miler in the USA, in 2012 the North Face 100 Miler in Australia, and in 2014 he won the North Face TransGranCanaria on the Canary Islands, a race that forms part of the prestigious Ultra Trail World Series Tour, which he now competes on each year. But there was one win he still wanted, in a race that he had come to obsess about, the Western States 100 Miler in the USA. “It’s just an iconic event, the original 100-mile trail race, and has a lot of history,” explains Ryan. “The legends of the sport have run it and won it, including Scott Jurek, Kilian Jornet and others. But for me, what makes the race so cool is the community that gets behind the race. Well over 2000 volunteers work on a race that only takes around 350 entries each year!”

“I finished second there in my debut in 2012, with a super fast time that also broke the course record, but then in 2013 I injured my ankle six weeks before the race and couldn’t run. In 2014 I was fifth, but after too much racing that year I was overcooked. In 2015 I got sick the Thursday night before the race and woke up dizzy and nauseous. I still tried to register, but almost collapsed, so I stumbled back to the hotel and missed the race. Then in 2016 I didn’t go, so I wanted to go back in 2017 and finally put it to bed.”

BRUTAL RACING CONDITIONS
Well, that’s exactly what he did. Overcoming brutal running conditions, he maintained a steady pace throughout to eventually take the lead in the second half of the race, and went on to claim the win in 16 hours 19 minutes 39 seconds, but he admits it was one of the toughest years ever for this race. “After a really huge winter, there was loads of snow still on the mountains, and they even had a ‘plan B’ to avoid the snow, but they announced two days before the race that we would use the original route. The first 30km were all snow, which took up to 20% more energy than normal to get through and made it slow-going to start off, so we were already on the back foot by the time we got to the lower altitude – and then we were whacked by one of the hottest years ever. At times we hit hot pockets of air for about 2km that made you feel almost like you couldn’t breathe. A lot of the race came down to managing the heat and keeping cool.”

Pre-race, the American Jim Walmsley talked about going after the course record, saying he thought he could become the first runner to break 14 hours, and in spite of the snow, he went for it, but Ryan bided his time. “Jim went out really hard and gave it a full go, but speaking to him afterwards, it was cool that he didn’t make any excuses – he said he burnt all his matches and set himself alight. I was lying second most of the race, and at the back of my mind I thought Jim might come unstuck, so I tried to stay within reach. At Forest Hill, around 100km in, I think the gap was around 45 minutes, but I got feedback that he wasn’t looking good.”

“I passed him around the 120km mark, just before the Rucky-Chucky River crossing. He was walking and looked pretty broken, and I knew I had it if I just kept going. When I crossed that line, I was just elated. This win brought me huge satisfaction, because it had become my biggest ‘Bucket List’ event. I won’t lie, I don’t think I have ever been so shattered at a race finish, but at the same time so elated, because I had waited a long time for that win. It was a dream come true.”

FINALLY FEELING RIGHT AGAIN
What made the win still sweeter for Ryan was that he finally felt like he had gotten over two years of struggling with illness and loss of form, which he attributes to his exploits in 2014. “That was a really big year for me. I won the TransGranCanaria, the first race in the Ultra World Trail Tour, which encouraged me to over-race to maximise the points. I eventually finished second overall in the Tour and probably did way too much racing that year, having also done the Drakensberg Traverse record run. It caught up with me when I contracted glandular fever at the beginning of 2015, and that whole year was a write-off. I still did some races, but was always on the back foot.”

“Looking back now, that was my toughest year, not knowing if I could get over it, and at the end of 2015 I took two months off. Then I decided to go back to my core reason for running, to enjoy it. Some days I would head out, and if I was not enjoying the run after 10 minutes, I would just turn around and head home again. Luckily I worked through that, and in 2016 I had consistent results, but nothing big – fourth place at Grand Raid Reunion, third at Tarawera Ultra in New Zealand, fourth at Ultra Trail Australia. All were part of the World Ultra Trail Tour, and I ended up fourth overall in the Tour, so I was fairly happy with my season, but still disappointed, because I knew I could do better. This year, I haven’t raced as much, because I wanted to focus on Western States. It’s risky to focus on one race – if something goes wrong, all your eggs are in one basket – but I realised that you need to focus for races like this.”

BACK TO THE BUCKET LIST
Looking ahead, the big question now for Ryan is what to focus on next. “I have other races coming up on the World Tour, but Western States was that one race I really dreamed of winning; the other is Ultra Trail Mont Blanc in France. So part of me wants to go back to Western States next year to defend my title, but another part says I’ve ticked that off, so rather go to UTMB. In 2015 I dropped out at UTMB because of the effects of the glandular fever – my legs were nowhere after just 40km – and I went back in 2016 but had stomach issues and dropped out again. So I haven’t decided yet… still plenty of time.”