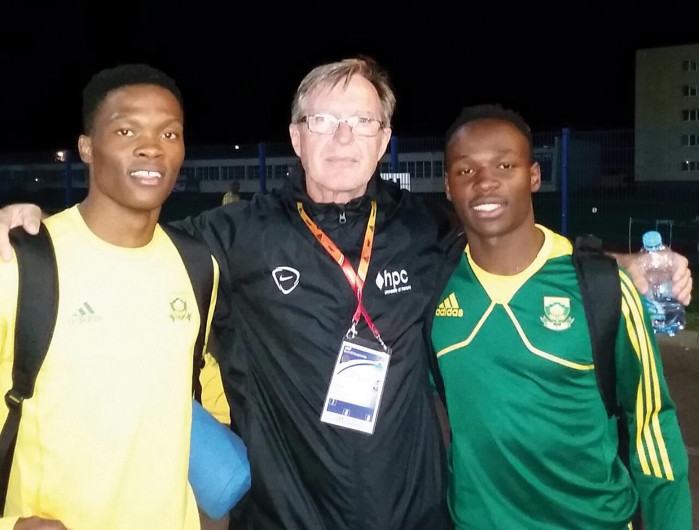 After years of South African sprinting not quite living up to the potential this country boasts – for example, the men’s 100m record was ‘stuck’ at 10.06 seconds for 26 years – the last few years have seen an incredible surge in faster time. That includes SA now having five men who have dipped under 10 seconds and a current SA record of 9.89, with several more athletes knocking on the door of long-standing SA records. And one of the leading players in this resurgence of sprinting is Hennie Kriel, Head Coach at the Tuks High Performance Institute in Pretoria.

Working alongside assistant coaches Chris Conradie and Thabo Matibedi, they employ an integrated training philosophy called the Grigora System – Grigora is Greek for Quick – and this programme has already seen them deliver nine new South African records in various age categories and across the various sprinting distances. In 2014, then ‘Grigorians’ Henricho Bruintjies and Ncinci Titi combined with Simon Magakwe and Akani Simbine to clock a new SA men’s 4x100m relay record of 38.35. The following year, Gift Leotlela set new SA 100m and 200m under-18 records, Henricho became only the second South African sprinter to dip under the magical 10-second barrier, and Taylon Bieldt set a new SA under-18 record for the 100m hurdles.

In 2016 Taylon added a new SA Record in the under-20 100m hurdles, and in 2017, the 100m, 200m and 300m under-20 records fell to Clarence Munyai and Gift, while 16-year-old Sokwakhana Zazini set a new World Best in the boys under-18 400m hurdles. However, typically humble at all times, Hennie is quick to give others credit for the incredible run of records. “It is very important to note that I am not solely responsible for the performances of the athletes. Chris Conradie and Thabo Matibedi play important roles. And I only mentioned athletes who improved records whilst in the system,” he says.

CALL TO COACHING
Boasting 31 years of top flight sprint coaching, Hennie originally hails from Jan Kempdorp in the Northern Cape. He was a talented sprinter in his younger days, winning a silver medal at the South African Youth Athletics Championships in the boys’ under-18 200m. After school he joined the police force for four years, then attended the Pretoria Teachers’ Training College, studying to become a math teacher. However, he admits that coaching was his first love. “I grew up doing all kinds of sports and it was a natural progression to start coaching when I stopped competitive sport myself, so I became a teacher because I wanted to coach sport.”

Once he had completed his studies, Hennie began coaching track and field sprinters, and with a keen interest in speed, he found himself digging deeper into research and training methods. A big believer in the human body’s physical ability coupled with the power of the mind, Hennie was convinced that South African sprinters could do better if they got their mindset right. “A lack of belief in the ability of our athletes, or rather a lack of belief that a sub-10-second 100m could be run without the use of performance enhancing drugs, was keeping South Africans from going under 10 seconds. Also, outdated training methods showed a lack of understanding how to develop speed levels to achieve those times.”

His career has included coaching Myrtle Bothma, whose long-standing SA women’s 400m hurdles record has stood since 1986, and his success with sprinters caught the eye of the Blue Bulls Rugby Franchise, who brought him on board as a speed coach. That saw him play an instrumental role during the Blue Bulls’ highly successful years from 2000 to 2005, alongside eventual Springbok Coach Heynecke Meyer.

THE BEST IN SA
Today Hennie and his team of coaches look after a group of more than 80 athletes, ranging from the best youth sprinters in the country to established senior stars such as LJ van Zyl and Wenda Nel, and he says he is kept busy by the job. “Most days I am with the athletes at the gym between 6:30am and 9am, attend meetings until around 10am, and then I have a late breakfast and catch up on admin. I fit in interviews and other commitments before I make my way to the track at 2:30 to start preparing for the afternoon session that starts at 3pm and normally finishes around 6:30 for 7pm,” he says.

Looking ahead, the 2017 calendar includes the IAAF World Youth Championships and IAAF World Championships taking place in July and August respectively, and Hennie is hard at work to prepare his athletes for these meets – and hopefully bring home still more medals and records. “South African sport has been kept hidden from the world and it is my duty to contribute to not only show the world, but also our own people, and especially those responsible to administer and grow our sport, what can be achieved by straight-forward hard, honest and intelligent work.”