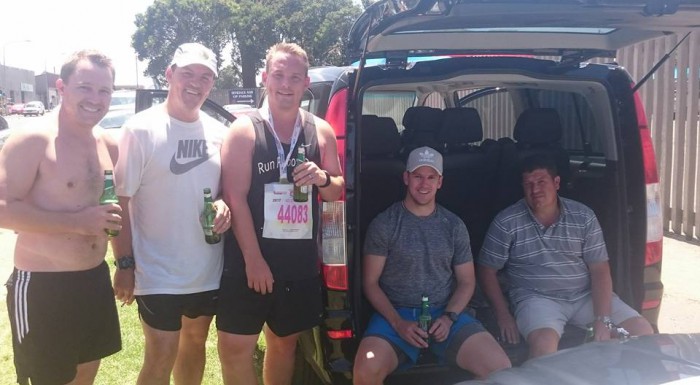 When Mark Joubert was dared to run the 2017 Comrades Marathon by his closest mates, they didn’t think he would do it, but he proved them very wrong. Of course, it helped greatly that he stood to win R100,000 if he finished! – BY SEAN FALCONER

It all started during a somewhat drunken bachelor’s party late in 2016. Mark Joubert was one of the groomsmen at a mate’s wedding, and during the bachelor’s, talk somehow turned to the Comrades Marathon. (As happens at all good bachelor’s parties!) Boys will be boys, and the banter became a bit competitive as they dared each other to run the Ultimate Human Race, given that many of them were admittedly a bit overweight at the time, but when it came to Mark, the whole group were in unanimous consensus that he would never run it. In fact, they were so sure that they decided to bet him that he wouldn’t do it.

“A few of the guys had run the Comrades before, and I commented that anyone can do it if they put their minds to it, so they immediately dared me to run it – and next thing it’s six guys betting me that I’ll never do it, since I weighed 110 kilograms. They even gave me 10-to-1 odds, which meant that if I finished the race, I would get R100,000 from the six of them, so I took the bet!”

Built for Comfort…
That saw Mark start training in January, running just one kilometre a day at first – 500m of running and 500m of walking – which he then gradually increased to 2km, then 3km. He admits that running had never been his thing, but he still managed to enjoy the training… some of the time. “My sporting background is in rugby, cricket and squash. I was never a good 100-metre athlete because of my weight, and I never did long distance running either. In my high school rugby days, I played flank up to standard eight, and then became a prop!” says Mark.

“So this running thing was never going to be easy for me, but it turned out to be a lot of fun doing it with the guys. We were a few heavyweights starting this journey, so we got ourselves a sponsorship from KIA East Rand and started calling ourselves the Run Fatboy Run Club. There were three Comrades novices in the group that founded the club, but in the end the guys who had already run Comrades all joined the club because it was a ‘funner’ group to be part of. We didn’t have enough time to form an official running club, but at the end of the day it was a whole bunch of fat guys having fun. That said, I started at 110kg and now weigh 100kg, so I didn’t lose as much weight as I’d wanted to… probably because for every 42 kays I ran, I drank at least 42 kays worth of beer!”

Tough Love Support
On the day, he managed to run fairly consistently through the day, with his average pace staying between 7:30 and 8:30 per kay. He reached the halfway timing mark at Drummond (42.7km) in 5:34:07, and he eventually came home in 11:40:17, crossing the line looking a very tired man before brightening up for the finish line photographers as he realised he’d done it. “I have to admit, it was hard, a real hack for me,” he says. “It was lekker, a real jol, until the top of Inchanga, but then the heat and loneliness at Harrison flats just killed me. After that I just had to try keep going.”

Of course, it helped that Mark had wife Elaine on the route seconding him, and she says she had to use some strong words to keep him going. “At 60km at Camperdown he said, ‘Lovey, I can’t do this,’ and I said you know what, you started this and you will finish it. Here’s your protein shake and here’s your energiser, now run and I’ll see you at the end,” says Elaine. “As a supporter it’s quite hectic, because you’re looking at the app and trying to follow everyone, while trying to drive and navigate, find parking and see them on the road, but it was so much fun. And when he came in to the finish, I was there, screaming ‘Run, Fatboy, run!’ and crying like a baby. It was very emotional… but I’m still laughing about having to help him put his pants on the day after the race!”

“The whole Comrades journey was quite intense, but I’m so proud of him for actually doing it, as I never thought he would. When he came home and said the boys had bet him R100,000 that he wouldn’t run the Comrades, I laughed at him and said it was a stupid bet, but that if he could pull through, then I’d be there with him 100% of the way. I must be honest, I was hard on him all the way. I toughened him up by not actually comforting him when he was sore – I said ‘Butter up, Sunshine, you’re in this for the long run,’ even towards the end of training, when he was like an emotional wreck. He was worse than a chick! But he committed to it and he did it, and I am very, very proud of him.

Another Year, Another Bet
Unsurprisingly, the very day after Comrades 2017 saw Mark already talking about returning for a second run in 2018. “Would I do it again? No problem! I’m definitely doing the Down Run next year. I want my Back2Back medal, and I’m a very good downhill runner thanks to gravity… I might even do a silver!” he jokes. Even more unsurprisingly, the boys have already started joking about raising the odds in 2018 and making another bet with Mark that he can’t break 10 hours. “Ha, ha, the guys are getting tempted, hey. They seem quite confident about this one, but then again, they were confident when they made the first bet!” At this, Elaine just rolls her eyes and says, “Oh my gosh, to go through all of that again!”