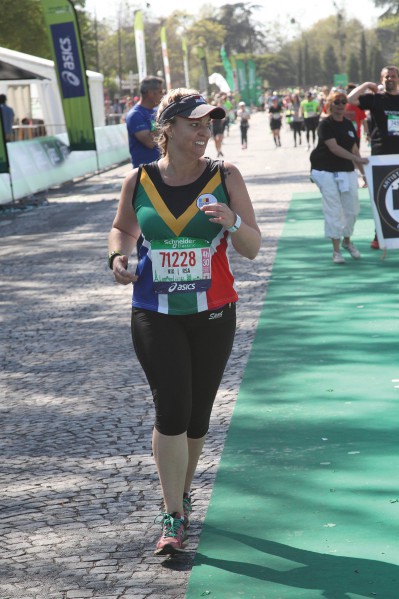 Nicky van der Westhuizen’s extraordinary journey to the 2017 Paris Marathon, via the Modern Athlete 9to5 Programme, is an inspiring story that defies medical and biomechanical logic. – BY JEANNIE JORDAAN, 9to5 COACH

I clearly remember the day that Nicky walked into the gym, on 23 May 2015, her birthday. One of her friends had dragged her to my 9to5 Challenge that morning, determined that the best thing to do on one’s birthday is go for a run with a new running group. Nicky confidently introduced herself and took me through a bit of her history with running, and I remember thinking, this girl is going to fly, never mind run. Needless to say, Nicky has proven me right time and time again. She doesn’t do anything in half measures, and doesn’t know the meaning of “stop.” Our running journey together (and our steadfast friendship) began that day, and I can say with both the pride of a coach and of a friend that I am grateful to be able to tell the inspiring story that got her to Paris.

THE JOURNEY STARTS
In November 2015 Nicky decided to compile a list of 40 things she’d like to do in the six months before she turned 40, hence the title of her blog, 40beforeforty. Then at Nicky’s 40th birthday party in May 2016 she received an entry for the 2017 Paris Marathon from her brother, Craig. There was another half marathon on the 40beforeforty list, not a full marathon… but what do you say when you get handed an opportunity to fulfil a dream and run a marathon in one of the most beautiful cities in the world? In Nicky’s words, you say “Wow, wow, wow! I couldn’t think of a more amazing gift.” And so began the training, and the blogging, and her journey to the start line on the Champs Elysees.

However, there is a significant bit of history that is relevant to this story. Nicky was unfortunately born with a club foot: Her left foot was turned inwards and upwards, with her toes virtually touching her shin! Her parents were worried she would not be able to walk, let alone run, and 40 years ago a club foot required fairly extensive surgery, often without much success. That meant her lower left leg was in a cast for much of the first year of her life, with the cast being redone every six weeks to try to straighten the bones as much as possible before three sets of surgeries commenced, the last when she was five years old.

Today Nicky has virtually no mobility in her left ankle and her “little foot,” as her family affectionately calls it, is three sizes smaller and overpronates substantially. This means she has to buy two pairs of shoes every time she needs a new pair, but more importantly, since ankle mobility is essential for the biomechanics of running, running is extremely difficult for her. As she explains, “I didn’t grow up running – in fact, I hated it. I was a tennis player through school and varsity, but after I was unceremoniously thrust into running a half marathon in Knysna in 2007, my road to running started, and thereafter I entered a few races, went to time trials and included a run or three in my week.”

Nicky completed a few more half marathons after that first one in 2007, and then in 2011 she decided to prove to herself that she could complete a marathon, in spite of her foot. She duly ran the Watervalboven 3-in1 Marathon, crossing the finish line in five and half hours, and through tears of joy, said to her watching parents, “I bet when I was born, you didn’t think I’d ever run a marathon!”

OVERCOMING CHALLENGES
Fast forward to May 2016 and we set out to get Nicky ready for Paris in April 2017. “It didn’t take too long for reality to hit, and while running the Paris Marathon sounded super glamorous, I soon realised it would involve months and months of training, hard work, commitment… all that stuff that sounds so noble, but is often hard to follow through with,” says Nicky. “I am not a fast runner, and so the six-hour cut-off time for the marathon was always going to be a challenge, but I was determined, and I would try contextualise my long training runs to see how they would translate into my ultimate marathon time. In other words, would I make it? My training under the guidance of Jeannie and Craig showed that I should (hopefully) make it in under six hours, but it was by no means a sure thing.”

Given her challenging biomechanics, Nicky often picks up injuries from long distance running, and that included a calf injury last September. Although not nearly ready to do a run over 21km after her injury, Nicky travelled to Nelspruit in November and surprised me on the start line of the Kaapsehoop Marathon. With a mixture of joy to see my friend and dread at the thought of what Nicky was about to put herself through, I knew there was nothing I could say to change her mind about running that morning. She assured me that she knew she was not fully fit yet, but still wanted to go as far as she could, which turned out to be 34km. My jaw dropped when I heard later what she had done.

Nicky just kept her sights on Paris and mentally pictured crossing the finish line on Avenue Foch. “That image kept me going many a time, especially on those early Saturday and Sunday mornings when I had to get up at 3:45am – or as my friend and training partner Amanda calls it, stupid o’clock – to be in time for a race at 6am in Pretoria or the South of Joburg,” says Nicky. And all too soon, she found herself in Paris with ‘bestie’ Amanda, lining up to register for the race at the Salon du Running Fair on the Friday before race day.

THE BIG DAY
As Sunday 9 April dawned, the girls made their way to the top of the Champs Elysees, and Nicky says she vividly remembers every step once the race started: “We began moving slowly forward en masse, with music playing, adrenaline pumping, and of course, some tears of emotion seeping out. But that was when my smiling started!” She took in the sights and soaked up the atmosphere, just as she had dreamed of doing so many times, and at 29km, when passing the Eiffel Tower, she thought, “Wow, who has that as a marker in their Sunday run?”

“The last 10km were really tough, but I just carried on… still smiling, still plodding, still making sure there was no walking when I could hear the various bands, and eventually, after 41.5km, I was on the Avenue Foch. The crowds were lining the road, banging on the advertising boards and cheering madly, ‘Allez, Allez,’ and I finished with tears of joy in my eyes, trying to take in as much as possible of the experience – which is why there is not one photo of me at the finish where I am looking in front of me! I did it, 42.195km in 5:49… and it was the most beautiful marathon I could ever have dreamt of, the culmination of a year of planning, training, saving, treating injuries, running races at stupid o’clock, crying, laughing… but knowing that Paris is ALWAYS a good idea!”