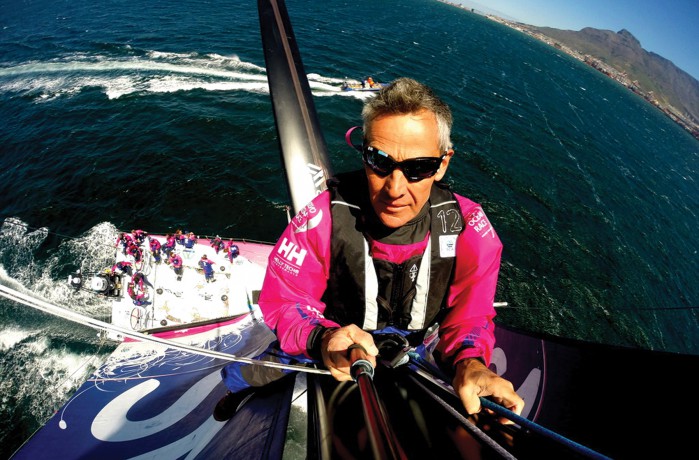 Thanks to his expert reporting and incredible ‘hands-on’ coverage of events via radio, social media posts and videos, and through his incredible photography, Jeff Ayliffe has built a huge reputation in sports journalism in South Africa, and one of his favourite events to cover is the Absa Cape Epic. – BY ROXANNE MARTIN

Through the years, Jeff has worked on some of the biggest sporting events South Africa has to offer, and you will be hard-pressed to find an adventure-based or endurance sport that Jeff hasn’t reported on. Amongst his favourite events to work on he includes sailing’s Volvo Ocean Race, mountain biking’s Absa Cape Epic, as well as trail running’s Otter Trail Run, and he says these events have provided some of the best moments of his career. “During the 2015 Otter Trail, I was running alone with Swiss runner Marc Lauenstein, filming his record-breaking run, and it was such an honour to be there alone – to watch and feel this legend at work, that moment is one of my career highlights,” says Jeff.

A natural thrill-seeker – Jeff has made close to 3000 skydives, competed internationally for South Africa in the sport, and also ran a skydiving school – he is often rewarded on assignments with thrilling moments that make him thankful for the opportunity to do what he does. “Covering the Volvo, I have raced with some of the top sailing teams in the Pro-Am, and I get to set up on the mast or on the rigging in 30 knot winds, reporting on the race. It’s a thrill every time,” he says, adding that a visit to the Kyalami Race Track produced a moment that he will never forget. “Sitting in the passenger seat of a BMW touring car with Williams Formula One driver Thierry Boutsen at the wheel, it was raining and we went through a mineshaft corner at 170 kilometres per hour. That was a definite career highlight!”

EPIC LOVE AFFAIR
Jeff has worked on the Absa Cape Epic for seven of the 14 years that it has taken place, and he has gained a deep understanding of the race, allowing him to get to know the riders and bring many great stories to light. “My secret is that I live like the riders, including sleeping in the tented village,” explains Jeff, even though he says that always being on site means he is invariably always working. “I really don’t mind that, though, because I don’t view the Epic as a job, I’m always finding something to do, someone to interview.”

For example, former Springbok rugby player Joel Stransky crashed out of this year’s race, suffering serious facial injuries in the fall, but a few days later was back to support his team mate and the other riders still in the race. Jeff immediately pinned the World Cup winner down for a video interview that went viral on social media.

Thanks to being so close to the riders, Jeff says he thinks they feel comfortable talking to him, even when they’ve had their worst day or terrible luck on the trails, because he has taken the time to develop a relationship with them, even becoming friends with many of the riders. “What’s always interested me about sport, and the coverage of it, is not the technical aspects of the sport, but rather the human element, what makes these riders tick as humans,” says Jeff. “I have seen the best and the worst of many of the riders on the Epic, and that’s what gets me excited as a journalist.”

DEMANDING SCHEDULE
This year’s race saw Jeff mostly working on the live streaming and coverage of the event, alongside anchor commentator Gerald de Kock and former professional rider Neil Gardiner. While Gerald did commentary from the race village and Neil was doing live coverage from the race helicopter, Jeff did radio updates from spectator points and refreshment points along the route, and at the finish, plus video shoots for Absa, video work with Spur-Specialized’s Ariane Luthi, edited daily videos of his own footage for his own Facebook page.

“Each year the Epic is an eight-day blur of amazing athletes, moments, friends, sights, sounds and experiences that leave me equally exhausted and exhilarated, but it’s such a privilege to be a part of this beautiful race,” says Jeff. He also says working under such pressure taught him a valuable lesson this year: “I discovered that it’s always worthwhile double-checking your hashtags when you post an image on social media, because sometimes auto-correct has other words in mind. I posted an image in a rush the one day, and added #lovemyjob, but auto-correct decided that I meant to say #lovemaking. Thank heavens it was on my personal page and not the official Absa Cape Epic page. I was very #embarrassed!”

PASSION AND PERSEVERANCE
What sets Jeff apart from other journalists is his passion for the sports he covers and an attitude that there is no limit to how far he will go to get the best shot, or an interview, and it’s why so many of the biggest races in the country choose to use him as part of their media teams. Those are the same characteristics that first opened doors for him and brought him success in the media world. Jeff grew up in Durban and says he always had a keen interest in radio. “I used to listen to Capital Radio 604, which in the 80’s was the only independent radio station, and their whole style of broadcasting appealed to me.”

He initially tried breaking into the radio industry by doing a brief stint at ‘Main Control’ at SABC Durban, but that didn’t lead to anything concrete. Then his break arrived when he was a member of the SA Skydiving team that was getting ready to depart for Brazil for the World Championships: Capital called to ask if one of the team members would be able to do a daily 45-second voice update on the event, and Jeff jumped at the chance. Those short but sweet radio crossings made him decide that radio was definitely the best career path for him, and to be the best he had to learn from the best, so in 1989 he approached Capital for a job. “There were no openings, but they offered to teach me on weekends for no pay, if I was serious about learning. I grabbed the opportunity with both hands, spending every weekend in studio, and I learnt that being a good broadcaster comes from the heart, from the passion you have for what you are covering. It wasn’t about money or reward.”

RIGHT PLACE, RIGHT TIME
When a spot eventually opened at the station, Jeff was first choice, because he was already part of the team. “I had done the hard work and proven my passion, so I was in,” says Jeff. That was also when he began working for Dave Mcleod, who became the mentor that would shape his career for many years to come. “He taught me about passion, accuracy, integrity, and every other area of being a solid sports presenter. I’ve held onto those lessons,” explains Jeff. “Possibly the biggest lesson that Dave taught me is to build a sense of integrity and trust with the people you interview, and most importantly, to always honour your word. If they trust you, you are sorted. If you lose their trust, you’re dead in the water – as simple as that.”

Jeff has gone on to work as a professional radio sports presenter for a variety of radio stations throughout South Africa, including Capital Radio 604, Good Hope FM, 94.5 KFM, 567 Cape Talk, Talk Radio 702 and East Coast Radio, and throughout his 28-year career he has continued to implement that lesson from Dave as he has met and interviewed some of the biggest stars in world sport, including the late Ayrton Senna, Nigel Mansell, Tana Umaga, Bruce Fordyce, David Beckham, Shane Warne, Steffi Graf, Kelly Slater, Karl Platt, and more. “As the years have gone on, so my relationships with top athletes has grown too, and I have built a relationship based on understanding – to treat them with respect at all times, even if that means losing the interview. They appreciate that,” says Jeff.

And while he has met many of the greats, Jeff says he still relishes meeting his listeners and followers on the street, that the real golden moments of a career in broadcasting have been when a stranger approaches him in a restaurant or shopping centre, introduces themselves and tells him how they listen to him every morning and how they really feel like a friend. “When I saw how much a smile and a kind word touched those people, and how much it meant to them that I took an interest and made an effort to connect, that made me realise how special my job was,” says Jeff.

ACTIVE LIFESTYLE
These days Jeff provides freelance digital media services in Cape Town, including radio, photography, video, MC’ing, writing and social media. “I take pride in being able to cover a wide cross-section of areas for events, so a client can use me in various roles if need be. I believe I’ve put in the work to reach a standard in all of these areas that I’m proud of.” When he is not working, you will often find him taking to the skies to paraglide around Cape Town, and when the wind doesn’t allow for flying, he’ll be running along the mountain trails, rock climbing or surfing. In between pursuing this active lifestyle, Jeff says he simply loves the work he does, and the people he gets to work with, and thus he adds that he is already looking forward to covering next year’s Absa Cape Epic!