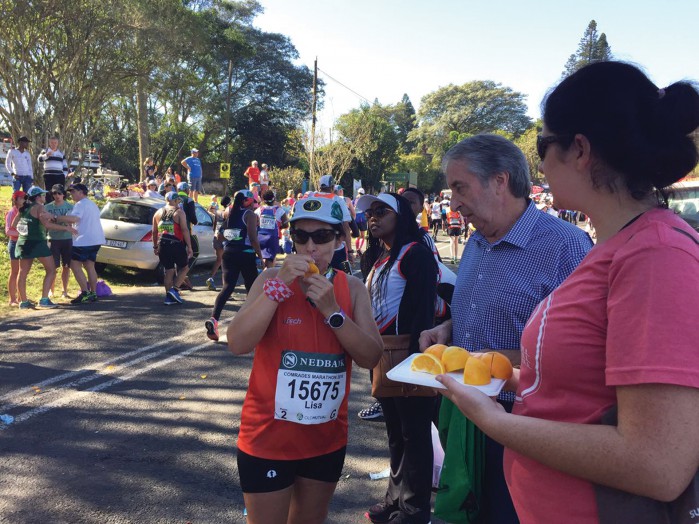 I am a lazy person by nature. I once did a personality test and it revealed that my motto should be “Why stand when you can sit, and why sit when you can rather lie down?” And yet I became a runner… – BY LISA MICHELLI MACKENZIE

While at a family braai in 1989, we watched 80-year-old Wally Hayward finish the Comrades Marathon. There was hardly a dry eye as he staggered across the finish line in 10:58:03, making the final cut-off time by a mere 1 minute and 57 seconds to become the oldest finisher in the history of the Comrades. My dad, Giuliano Michelli, watched this and announced that if an 80-year-old can finish this race, then he could walk it, too!

Of course, my mother Gail took him up on his challenge and made a bet with him that if he did not manage to complete the run the following year, he would have to pay for her to visit her sister in Canada. So my dad started to run that year and completed his first Comrades in 1990, coming home in 10:56:07. Since then he has run the race 20 times, finishing it 18 times, and fittingly, the late Wally presented him with his permanent Green Number after his tenth finish in 2000. And that’s how running was introduced into our family…

From Zero to Hero
I was never interested in running myself. I thought that I ‘waddled’ and could not run, and I have never been any good at sports, so the thought never once crossed my mind that I would ever want to take up running. I was always in awe of other runners, especially at the finish line of the Comrades, but I thought that it was something that I could never do, and quite frankly, I was not interested to even try.

The years passed, I turned 40 in 2012, and it felt like I was going through a mid-life crises. I was feeling miserable and felt like I had nothing to live for – that’s how bad it was! – so I went to see a psychologist and my doctor put me on anti-depression pills. Then my dad called me up one Sunday morning and announced that he was going to enter me to run the Comrades Marathon the following year, so best I start running!

On the 6th of November, my dad met me at my house and we went for a short run/walk. I remember not being able to run 100 metres without needing to walk… I absolutely hated running for the first few months. I was always out of breath, everything ached, and it was no fun at all. I was told that running is like a drug to the body and that we get all these “feel-good endorphins,” but I was not experiencing any of that. This felt like sheer torture! But I persevered, and after three months I was going to run my first half marathon. I have never been so scared before, but my dad ran with me and was so patient, telling me when to walk, and to drink, and breathe. I finished it and the feeling was out of this world! Now I finally understood about all those endorphins.

The Lure of Comrades
A few months later, I ran my first marathon, so slowly that the timing mat had already been packed away when I got to the end, and the next day I was so stiff, but words cannot describe the sense of achievement that I felt. I was now a runner! That year I did not manage to qualify to run Comrades, as I was still unable to run a marathon under five hours, but in November 2013 I ran the Kaapsehoop Marathon and eventually qualified in 4:36. I was now able to attempt the Comrades in 2014, but training for it is no easy feat: You have to be consistent in your training, and 100% dedicated to achieving this huge goal. It’s also a mental game, and I had to train my brain to believe that finishing it was indeed possible.

In the six months from January 2014 leading up to my first Comrades, I ran six marathons and two ultra-marathons, and felt that I had put in the mileage to be ready. Even though I was still petrified, I ran the Down Run in 11:18, so I decided to do the 2015 Up Run and get my Back-to-Back medal. I finished that one in 11:38, and then decided that I want to get my permanent number, so I ran the 2016 Comrades in 11:24. Unfortunately, I was cut-off at Umlaas Road in this year’s Comrades, having been nauseous for much of the first half due to the heat, but this experience has motivated me to come back next year even better and stronger, and amped to run my best Comrades ever. Because what doesn’t kill you makes you stronger!