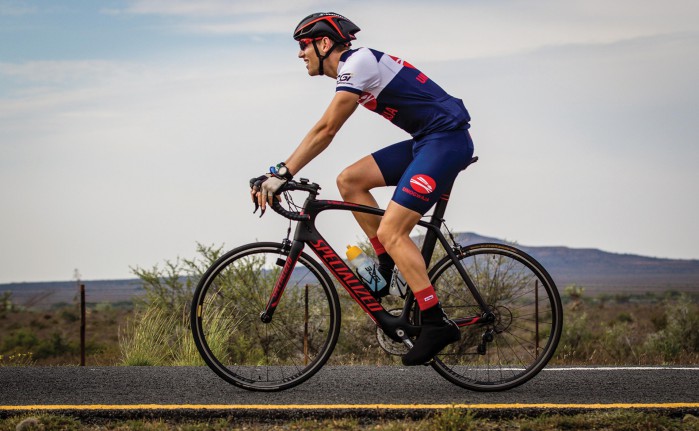 Cape Town-based endurance junkie Miguel Netto has completed two Comrades Marathons and will be aiming for a third this year, but he has never actually flown into Durban for the race. That’s because he has always ridden there on his bike, and is set to make history by doing so once again this year. – By Sean Falconer

When 1931 Comrades Marathon winner Phil Masterton-Smith climbed on his bike in 1933 to ride from Cape Town to Pietermaritzburg to go run the Comrades, because he could not afford the train fare, he could not have foreseen that nearly 80 years later his incredible feat would become the inspiration for an annual ride that not only commemorates his journey, but also raises a huge amount of money for charity. And he definitely would not have predicted that somebody would repeat his gruelling trip three times… but that is what 31-year-old marketing executive Miguel Netto is set to do this year.

Known as Unogwaja – Zulu for a hare – Phil took 10 days to cover the 1600-plus kilometres to Maritzburg, arriving the day before the Comrades, which he then ran and finished a remarkable 10th. That story inspired Red Sock founder John McInroy and friends to take on the first Unogwaja Challenge in 2011, to raise money for the Comrades charities, and every year since then they have repeated the trip, with athletes from all over the world applying to be part of the team and riding to raise funds for the Unogwaja Light Fund, which channels money to various causes around the country. A few athletes have completed the trip twice, but this year Miguel will become the first to do a third Unogwaja!

Miguel’s sporting background includes playing cricket in the UK, but his focus has always been on endurance sports, notably in ultra-distance triathlons as well as ultra running – he did his fifth full Ironman this year, rode the Absa Cape Epic in 2016, and prior to his first Comrades in 2015 he had completed the Old Mutual Two Oceans Marathon as well. In that first Comrades, he posted a time of 11:31:53, following the gruelling 10-day ride from Cape Town, and the following year he improved his time to 9:39:46, remarkable given that he had once again done the long ride to get there. When asked why he would want to put himself through this gruelling trip yet again, Miguel simply shrugs his shoulders and smiles…

“There are a few personal reasons, and a few practical reasons. On the personal side it’s the best way to experience the mind-blowing beauty of this country we live in, and it’s a channel for me to make the biggest difference in the field of what I love doing,” says Miguel. “Also, what I’ve gone through with Unogwaja for the past two years has been simply life-changing, so going back and adding a personal tribute by becoming the first to do it three times also adds a little bit to it. But it’s more about signing off on what is probably going to be my last Unogwaja – at least for now – and trying to make sure that my chapter closes with a bang, both charitable and personal.”

From a practical point of view, Miguel explains that the Unogwaja team likes to take some ‘experience’ out on the road each year, hence asking some riders to return for a second year. “At the farewell breakfast after my first Unogwaja in 2015, I was asked to return in 2016. I had a week to consider it, but I’d already decided on the flight back that I wanted the whole experience again… it was a no-brainer! It is a long and daunting journey, so my role in 2016 was as a second to Stoff, John’s dad and the leader of the trip, and if someone had a puncture or needed help, I was the guy to help them. This year may be Stoff’s last Unogwaja, and we’ve walked a special journey together, so it’ll be special to finish off with him. Also, the team this year is perhaps stronger in running and not as strong a cycling team, so there is an element of being able to help them out on the road again.”

Mainly, however, Miguel admits that he is driven by the goal to become the first South African to do three consecutive Unogwaja rides to Durban and he also has some unfinished business with the Comrades route. “My first Comrades was not great – I only just got to the finish – but last year I finished in just over nine hours, so this year, if I could do a sub-nine, that would finish off the personal goal. But the first priority on any Unogwaja is to get every single team member to Durban, and then get them to the finish line of Comrades. If you have to go back to fetch someone on race day, than that’s just what you need to do. Whatever happens on the day, if I can finish, that will be great, and I can go out with a bang!”

Miguel’s path to the Unogwaja Challenge began when he met John through the weekly Red Sock Runs. He saw the Red Sockers out running one Friday morning and by chance happened to meet John a few days later, where they spoke about Unogwaja. “The story captivated me right from the beginning. Apart from the history, it struck a huge nerve with me, given my personal endurance background of pushing the body to its limits, plus it had the charitable and empowering point of view, of doing something for this country. At the time I didn’t actually think it was possible to cycle to Durban and run the Comrades, but now I’m about to do it for the third time!”

Unsurprisingly, Miguel says his first Unogwaja was quite an eye-opener, given that he was going into unknown territory that he had not even experienced in his Ironman or Cape Epic events. “It’s such an interesting thing that goes on in your head. The cycle is so daunting, but with nine strangers you’ve just met, you get on the road and you make it through day one… Everything is sore, but somehow you get through day two, and everything is still sore, and then your body just adapts, and it becomes a rhythm. Then you arrive in Durban to take on the Comrades – and everything is still sore – but the great thing is that there is no expectation on you. Having cycled there, no-one is looking at you to do a great time, your goal is simply to get to the finish line.”

“In my first Comrades, the team got me through to halfway and then we just did what we could to get the rest of the team home. It felt like my teammates were kilometres ahead or behind, but the support group told us afterwards that we were actually just a few minutes away from each other most of the day. The whole day we were passing each other and helping each other, and it was the most special way to run my first Comrades.”

If all goes smoothly this year and Miguel ticks off his third Unogwaja, he says he already has plans for the next goal on his bucket list, and says his wife, Rosalind, knows all about his plans. They met through mutual friends while both studying at Stellenbosch University, but went their separate ways until meeting again by chance some years later on a boat cruise in Hermanus. They’ve been married now for nearly two years, and Miguel says she is the best race second he could ever ask for. “Shame, she has to put up with my bucket list of endurance events, but thankfully I’m ticking things off quite quickly.”

“After Unogwaja, I want to go back to triathlons, because I’ve had an overwhelming desire for a couple of years now to go to Hawaii for the Ironman World Champs. I fell just short this year, but my dream is to qualify for Kona, even if it takes a few years. I might also try riding the Epic again.” And his fund-raising efforts for charity will also continue, even if he is no longer riding and running for the Unogwaja Light Fund. “I started my own charity a few years ago called Miles for Miracle Kids, when I did my first Ironman, so I’d like to get something like that going again, but I also want to keep the balance between giving back, and personal achievements and having fun.”

“That’s why I have so much respect for John and his Red Sock and Unogwaja initiatives. Anyone can start a charity to raise money for something, but to make sure it has a living legacy and to make it about more than just charity – about using what we do to empower the nation – and to bring a story to life and make it grow all over the world, that is why I’ve hung around so long. Unogwaja is not just a South African thing, it is made up of six or seven different nationalities at any given time on the road, and it just shows that people believe in what we are doing. That’s really special.”

To learn more about the Unogwaja Challenge and to support Miguel and his fellow rider-runners, go to http://unogwaja.com