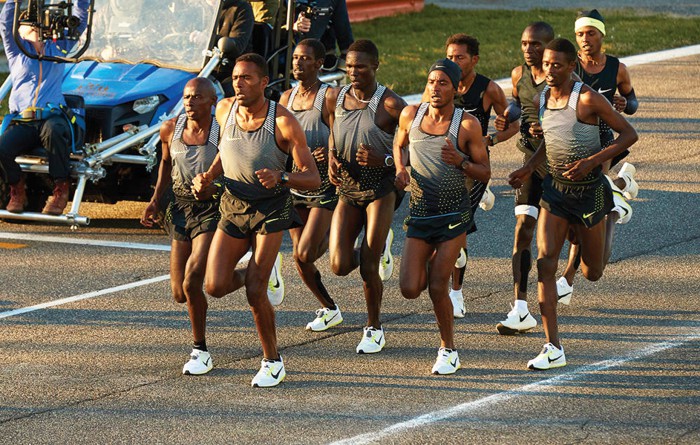 63 years after Roger Bannister broke the four-minute mile, Nike rolled out its Breaking 2 Hours attempt to show that it is possible to run the marathon distance in less than two hours. I believe they succeeded in proving that it’s humanly possible, even though the attempt failed in definitive terms, as Kenyan Olympic Marathon Champion Eluid Kipchoge clocked 2:00:23. It was, however, an amazingly rhythmical and consistent effort that has many features that provides instant ‘take home’ messages and applications for every runner.

Analysis has shown that the massive clock tower on the lead car provided the greatest assistance as the runners were ‘guided’ by laser beamed lights into the draft zone behind the vehicle. Analysis of Kipchoge’s assumed power output and saving behind the car accounts for virtually all but a second of the increase in time. The rate at which Lelisa Desisa and Zersenay Tadese dropped back having exited the ‘safe zone’ was visual evidence of the energy-saving effect: they were either within two metres, or way out the back!

A point few have picked up on is the benefit of the course layout, which saw the 100% accuracy between the measured and run lines. This is due to the actual line being consistently in the middle of the track allowing the runner to be directly on top of the line for the whole test. This is normally not available to athletes in a race and the tighter corners and high curbs will often see runners going further around bends. Add in trips to refreshment tables and juggling around the bunch and it is not unreasonable that this alone saves 80 to 150 metres, which is in effect 12 to 23 seconds.

After these two items are taken into account the effect of the products, compression tights, strap blades (likeHermes wings) on legs, and shoes have minimal effect, although their contribution to maintaining the runners’homeostasis may come out of data. That, in turn, would contribute to the duration of the high intensity effort, and more importantly, the mental control shown by the Olympic Champion.

Brain versus Braun
For me this test of human performance was living proof that it is not the physiology that limits us – it is the mind. If it was physiology, then how could Kipchoge have picked up the pace over the final few hundred metres? Whatfueled this sprint? Certainly not the sports drink. If he was physically unable to continue, how was he able to walk for perhaps 20 or 30 metres after finishing, then jog to greet and hug a friend? If the physiological limit had been reached he would have collapsed over the line.

This supports, and to my knowledge is the first monitored endurance demonstration of, the Central Governor Theory evolved by Professor Tim Noakes in 2005. My favourite simile for this relates to engineering: The body has a factor of safety on the effort level that the mind (CPU in computer term) allows the body to do. As the intensity increases, the body sends signals (of fatigue) to the m ind to warn that high intensity level has been reached. The mind then tells the body to ease of, as a protection. The limiting intensity level is determined by past experience and also chemical action, such as lactate, which is brought in to protect the muscle but creates a different feeling in the body, which is then recognised as a signal not to sustain this level.

The monitoring of Kipchoge’s effort before and in recovery will hopefully allow the identification of the changes that prompted the moderation of effort, and if these can be trained then we can learn to physically improve the limiting level. Physical training can also change our perception of a limiting level. This is a direct benefit of time trials, intervals and hard workouts that convince us we are fitter, and therefore we ‘believe’ we can push harder in the next race. The mind then accepts a greater intensity, and of course physiological signs are less due to betterfitness for the task.

Mind Over Matter
But it has been shown in emotionally-driven explosive tasks, where time is too short to think, that the body can override and accomplish phenomenal action. It is desire and self-preservation that fuels these actions, blockingthe mind’s normal action. These actions can result in soft tissue damage, but the mind ‘allowed’ both because there was insufficient time to rationalise the action, and because it was lifesaving.

The problem with long duration tasks, such as distance running, is that we have too long to debate with the mind as to whether or not there is sufficient need to go beyond the normal limits. Most runners have experienced the doubts that can occur at the start of a race, and how we find potential excuses for holding back when we want to race, such as a bad night’s sleep, poor training, or a glass of wine the night before. However, once into the rhythm of the race, these often melt away as the mind is content with the level of effort. The questioning only returns in the last section of the race, where the level of desire is again tested and the winner is frequently the person who ‘wants it most.’ This cliché highlights that there is little to choose between the physiology, whereas the ability to override the ‘thermostat’ determines the winner.

Engineering’s fail-safe concept has also been experienced in long distance running. Quite simply, the mind will not let the body kill itself, so the normal protection is simply to get the body to lie down, as is frequently seen in both dehydrated or energy-depleted runners. Once on the ground, runners regain homeostasis, and may even get up and continue, the classic example being Johnny Halberstadt in the 1979 Comrades: He collapsed to the road, was fed a litre of Coke (sugar), and recovered to finish second.

Bigger Things to Come Clearly there was no lack of fluid or energy in Nike’s Breaking 2 Hours attempt, as both aspects were catered for. Kipchoge demonstrated that it was mental and perception-limitation only, and his final sprint showed that barriers can fall in the future. Importantly, the time of 2:00:23 will change perceptions of what can be achieved, notably with the marathon World Record. A World Record takes the performance beyond what the mind has been told is a limit. Conversely, these are not true limits, but barriers created by the mind. No matter what standard of runner we are, Nike’s inadvertent demonstration of the Governor Concept offers the potential of a whole new level of achievement for each and everyone of us, so turn up your thermostat!

About the Author
Norrie represented Scotland and Great Britain in numerous ultra-distance events, then emigrated and represented South Africa in triathlon. He is an IAAF-accredited coach and course measurer and is the official Old Mutual Virtual Coach. He has authored two books (Everyman’s Guide to Distance Running and Every Beginner’s Guide to Walking & Running), and counts 21 Comrades medals amongst his more than 150 ultra-marathon medals. More info at www.coachnorrie.co.za