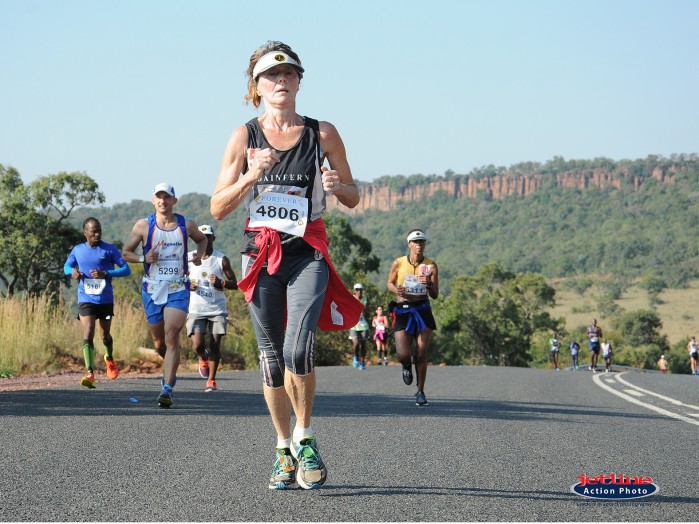 Christena Walter is a 57-year-old Irish mother of four with a Swedish husband who landed on our shores in mid-2014. Having lived all over the world and taken up running along the way, it was in South Africa that the running bug really took hold of her! – BY TREVOR HOSKINS

It was while living in Baghdad in 1986 that Christena started running, out of boredom with the repetition of her normal gym routine. She quickly grew to love it, and even though Iraq was then at war with Iran, running became a regular part of her routine. Later that year she was persuaded to run her first marathon, which was four laps of a 10km route with an extra bit added to make up the distance, and she finished it in a little under four hours.

In the years that followed, Christena gave birth to four daughters while the family moved several times around the globe, and she continued running casually in between the pregnancies and moves. It was only when living in Kenya for five years that her running moved to a new, more formal level, when she joined a running club, but even this was ‘ casual running’ by comparison to what she found in South Africa when she moved here in 2014.

UNIQUELY SOUTH AFRICANSoon after moving into their new home in Dainfern in Johannesburg, Christena was encouraged to attend a runners’ meeting at the local clubhouse, which was her first interaction with what she calls a bunch of crazy South African runners! “There was nothing casual about their approach to running, however, in that their distances were longer and more regular than anything I had been used to, but what amazed me most was how friendly and accommodating everyone seemed to be,” says Christena.

This friendliness extended beyond Dainfern into races and Christena says she was simply blown away at the level of organisation of SA events, especially in terms of what is offered at the refreshment stations. “I remember running the Kilimanjaro Marathon one year and only one station, at the 32k mark, offered anything other than water – and that was after a 16km climb to get to that point!” she says. The other aspect of SA races that she immediately took to was the spirit and vibe amongst the runners. “The amazing camaraderie here was certainly not what I had experienced internationally. I had competed in several international big city marathons around the world and none even come close to the vibe experienced here.

”Another highlight of SA for her was the availability of running-related gear here, which she describes as phenomenal, and she also speaks glowingly about our sports medicine options. “The injury care options here are also simply amazing,in that specific treatments are carried out to address specific problems, whereas my experience, including in some First World countries, is generally that medicine is just prescribed to deal with various issues. Put all of these things together and you’ ll see why I strongly believe that South African runners are spoilt for choice in every respect!”

LOVING THE RACES However, probably Christena’ s favourite aspect of SA running is the full race calendar throughout the year, which she says is not the case anywhere else in the world, and she has found herself on the top step of the podium in the women’ s masters 50-59 age category several times over the past few years. Her most recent achievements include winning her category at the Forever Resorts Loskop Ultra-marathon and finishing second master at the MiWay Wally Hayward Marathon. Interestingly, she refuses to put herself under pressure during races by wearing a watch!

Unsurprisingly, the seed of running Comrades was planted very early on in Christena’ s association with the Dainfern crowd, and she says the race has become one of her firm favourites. “Mention the word Comrades internationally, more so if you have a medal, and people are in awe – it just seems to be a bucket list race for so many people all over the world.” Christena clocked a 9:11:44 for a bronze medal in her first Comrades in 2015, then posted 8:29:08 last year to take a Bill Rowan medal.

Sadly, the 2017 Comrades will be her third and last for the time being, because in June she and her husband are moving home yet again, this time to Bangalore in India. She has already made contact with a running club there, who are apparently over the moon that a runner from Comrades country will shortly be joining their ranks, but it is with a heavy heart that this adopted South African will be leaving all this behind. “There is nowhere in the world that has the same passion for running, atmosphere and camaraderie as in South Africa, but I will take with me the most amazing memories that I will cherish forever.”