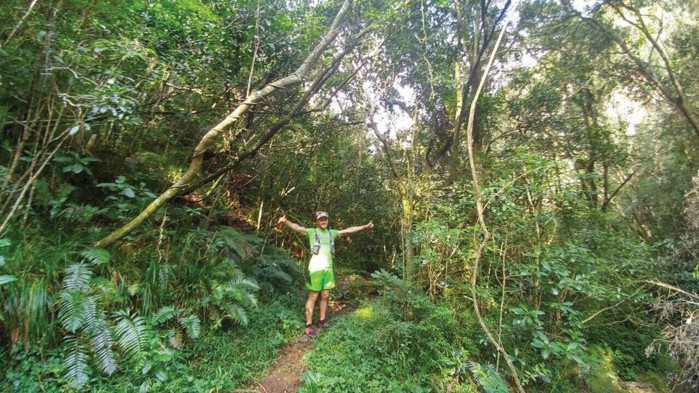 Can you imagine running some 400km non-stop over five days, on some of the gnarliest trails, fighting extreme fatigue and muscle soreness much of the way? Well, that’s what it takes to run the Munga Trail Run, and we caught up with the winner of the inaugural race, Bennie Roux, to find out more about the experience. – By Brendon Lowson

From the 19th to the 24th of April, many trail running fans across South Africa were glued to their computers and cell phones, tracking runners and following the updates posted on social media as a tiny group of 23 ‘guinea pigs’ took on the inaugural running of the new Munga Trail Run. This 400km self-supported, single-stage race from Belfast to the rim of the Blyde River Canyon in Mpumalanga was the brainchild of Alex Harris and Erik Vermeulen, and it took them 12 months to put the whole thing together, plotting a route that would involve only about 20km of tar, with some 200km of single-track through virgin grassland and forests, and the rest made up of forestry tracks and gravel roads.

And then they gave runners a 120-hour cut-off, which meant that runners needed to cover on average 80km a day for five days in a row! Think about it… that’s pretty much running five Comrades Marathons on five consecutive days. No wonder Alex and Erik dubbed their new event the “Toughest Race on Earth!” But tough is a word that gets South African trail runners going, and none more so than Bennie Roux.

Growing up in the Free State, the 39-year-old father of three from Pretoria says that while he played rugby, soccer and cricket at school, he was never really keen on any of these sports. Instead, he found himself drawn to mountain biking and swimming, preferring the individual endurance sports, but running was not his thing as yet. That changed when his brother ran the Comrades Marathon. “I only started running to prove to my older brother that I was a better Comrades runner,” he jokes. He completed his first Comrades in 2000, finishing in a time of 10 hours 21 minutes, and the running bug had bitten.

Last year he ran his 10th Comrades, posting his best time of 6:53:55 on the Down course to go with his 7:05:38 PB on the Up course of the previous year. However, as impressive as his road running credentials are, it is as a trail runner that Bennie has gained the most attention. As he says, “I became addicted to trail running, and as my running improved, I decided I wanted to become famous for winning races, but for a while my most famous trail running moment was getting stuck on a mountain ledge during a race, waiting for four hours to be rescued, and making the front page of all the major newspapers!”

That was in the 2013 Brauhaus 45km Trail Run near Rustenburg, which Bennie was leading at the time when he and the second-placed runner took a wrong turn. Having lost the trail, they attempted to climb down a kloof by jumping from ledge to ledge, and both got stuck, needing to be rescued later by the Mountain Club of SA. While it was a scary experience for him, due to having a “healthy respect for heights,” Bennie did not let it stop him from returning to the trails, but it does mean that the first piece of advice he gives to beginner trail runners is always “Never jump when lost on a mountain!”

Since then Bennie has become used to the top step of the podium – he won the 2014 Namaqua 120km four-day trail race, the 2014 and 2015 Wolkberg 60km two-day trail race, and the 2016 Addo 168km trail race, amongst others – but the Munga was on another level completely. When the race started, the field of 23 initially stuck together, since nobody seemed quite sure how best to approach the daunting task ahead, but by the 25km mark, Bennie had decided that it was time to go for it. By the time he reached race village three at 250km, he had built a commanding lead of nearly six hours, while behind him the battle for second was now between two women, Nicky Booyens and Tatum Prins.

But while Bennie seemed to be cruising, he did have a few problems along the way. “Being unfamiliar with races this long, I completely forgot to charge my electronics. I ended up in a forest one night, when there was almost no moon, and the unmarked trail was extremely difficult to pick out. Suddenly, I realised my GPS was almost flat and I was only carrying one spare battery! I got a huge fright, because if I’d lost power then I would never have found the trail again.”

Another night he lost all sense of direction in tall grass at the bottom of a valley. “The grass was so thick, and it was very disorientating. Eventually I came out the other side and saw the trail markers, and I was so pleased with myself, until about 300 metres later when I looked at my GPS and realised I was running back along my old path, in the wrong direction! My only choice was to turn around and go through it all again.”

While those incidents were mildly amusing, they allowed Nicky to close the gap and she ran with Bennie for quite some way of the race. Bennie eventually pulled clear again, but then made a serious navigation error just 24km from the finish, which allowed Nicky to take the lead. “It couldn’t have happened at a more critical time,” he says. “At first, I just thought my GPS was being funny and would auto-correct, but it didn’t, and I ended up having to run hard for an extra 14km to make up for that mistake.” In the end, he only just snuck back into the lead, coming home first in 101 hours and 25 minutes, with Nicky finishing just two minutes later!

Looking back on his epic run, Bennie can joke about the lessons he learnt along the way. “Realising that I couldn’t fully plan my run, I decided to just take it as it comes and adapt. For example, I slept when I needed to, and when I was feeling good, I just kept moving. Still, I’m surprised how well my race went – at no stage did I feel any pressure on myself, except for that last section just before finishing – but next time I will definitely pack more batteries and a good powerbank or two… because if it’s not on Strava, it didn’t happen!”