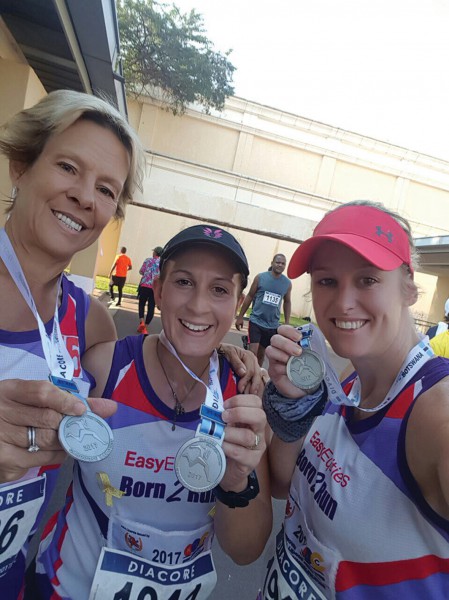 On the afternoon of 3 May 2017, shortly after receiving news that Karen Brough had won the Modern Athlete Diacore Gabarone Marathon competition, three bubbly running buddies met up for a celebratory ice-cream and to make some plans for our (very) last-minute road-trip. Botswana will never be the same, and neither will Sandra Brownrigg, Karen and I. – BY WENDY SELLER

We are all fairly new at this running thing, having only joined the Easy Equities Born 2 Run club at the end of 2016. So we couldn’t believe that within a matter of minutes, our weekend plans had changed significantly and that we would be running our very first international race four days later. The next 24 hours were frantically busy as we ran around and arranged everything from transport to passports, babysitters and playlists for the four-and-a-half-hour drive to Gaborone.

The drive was a laugh-a-minute adventure, as three city girls took to the road and made our way through quaint dorpies, popped in at the local Prokureur’s Kantoor for a toilet stop, and man-handled the 4×4 on the longest stretch of rugged dirt-road any of us had ever seen.

Four hours flew past in what felt like forty minutes. On the other hand, getting through the border was a testing trundle. Thankfully it was still light when we drove over the line and found ourselves in rush-hour Gaborone traffic. The locals were friendly and happily helped us find our way to the Miami-esque Grand Palm Peermont Hotel. By now we were a little frazzled, and after checking in, we devoured dinner and called it a night.

Excitement Overload
Early on Saturday morning we laced up our running shoes and went for a little exploratory trot to acquaint ourselves with the streets of Gaborone. It was surreal to see the race organisers out before sunrise, putting finishing touches on everything, including painting the picket fence in anticipation of Botswana’a running event of the year.

The three of us were like kids the night before Christmas at race number collection, wide eyed and hyped up for the experience of a lifetime, and proudly paraded our lumo-orange race packs for all to see. None of us slept very well that night – typically we never do, as pre-race excitement had taken hold – but the preparation was done, our numbers pinned to club vests and alarms were set for an early start.

Race morning came and we once again realised how lucky we were to be standing at the start line of the Diacore Gaborone Half Marathon, surrounded by a few hundred runners from every corner of the globe. The race energy was frenetic just prior to the gun going off, but as soon as the race began, we took to the streets with only one objective: To enjoy every minute, to savour the experience, and to do what we love most, run!

Because we had no preconceived ideas about the route, we didn’t bog ourselves down with any pre-race strategies or discussions about elevation, pace and route profile maps, we simply went out there to have tons of fun and make it home with a shiny new medal to show everyone.

Essential Selfies!
After a few kilometres, Mother Nature pulled out all the stops and showed off with the most insane sunrise. The blazing ball of fire in the sky literally rendered us speechless, and we stopped on the fly-over for a couple of selfies. We were tourists, after all! Running in Gaborone can only be described as “city meets bushveld,” with tarred roads surrounded by the remnants of excavated bush, and livestock roaming around – chickens, cows and even donkeys crossing the roads reminded us of the honesty of Africa, and it was brutally beautiful.

The vibe was incredible, with lots of locals cheering and showing appreciation for us foreigners running in their country, and the water points were frequent and well managed in the 36-degree heat. The three of us were on top of the world – a flattish, slightly undulating African world, but we were on top of it anyway. The half marathon route allowed for a very consistent race, and despite stopping to take snapshots along the way, we found ourselves running through the finish line in very respectable times, with the most awesome memories. The cherry on top was receiving the news that Karen had won a prize for finishing fourth in the over-40 age category!

Although the Diacore Gaborone Half Marathon is not one of the toughest races, this was by far the most thrilling race for us. We felt like champions as we hugged at the finish line and then danced our way to medal collection. What a feeling finishing the race with the widest of smiles and happiest of hearts – three friends and sisters in running. And with Botswana having endeared itself to us, we will happily return to run the full marathon in 2018.