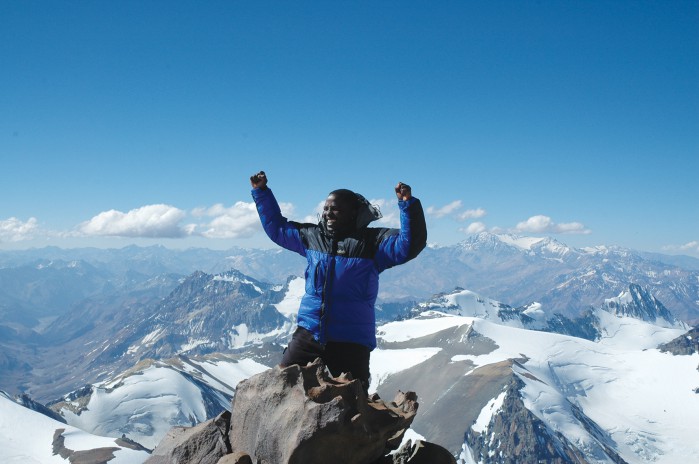 His remarkable achievements include completing the Seven Summits Challenge (climbing the highest peak on each continent, including two Everest summits), Trekking to both Poles, 20 Kilimanjaro summits and many other peaks, seven Comrades finishes, three finishes in the Two Oceans Ultra, and now Sibusiso Vilane is adding cycling achievements as well. We went behind the helmet to find out what motivates this incredible adventurer. – BY BRENDON LOWSON

MA: You are known as Sibusiso ‘The Lion’ Vilane. Where did the nickname come from?
SV: I was given this name by my teammates from Mexico while climbing Mount Everest in 2003. It all started when Ibegan startling them with my game-ranging stories and having to guide people where there were lions.

MA: What motivates you to take on all these challenges?
SV: Realising that there is so much to do yet so little time… I am also blessed with this amazing natural physical body, and all my motivation comes from that.

MA: When did you learn to ride a bicycle?
SV: Not a great start when you are over thirty! In 2006, while training for our Antarctic South Pole expedition, Alex Harries decided we should cross-train, and suggested we buy bikes, and before I knew it I had fallen more than a dozen times in the streets of Johannesburg. It wasn’ t inspiring, but I kept on until I could ride a few hundred metres without falling!

MA: What made you decide to take on the ABSA Cape Epic?
SV: It was one of those ‘ over a couple of drinks’ commitments! Just joking… I had always followed the Epic, but never thought I could commit to it, judging by my dismal riding skills. However, a couple of years ago I met my Epic partner-to-be, Justin Pearse, and after a casual chat I committed to riding the Epic this year. It was that chance opportunity of meeting someone who wanted to do the same thing, and I felt I could take it on.

MA: You didn’t have much time to get to know Justin before the race. Did that affect your team dynamic?
SV: We worked brilliantly well together overall, but we did not share the strategy as to how we were going to tackle each day, a result which led to me not finishing stage one. I learnt that it is important for teammates to complement each other and be adaptable when needs be! That’ s critical for an event like the Epic!

MA: After not making that Stage One cut-off and having your number board cut off, what motivated you to keep riding, eventually finishing in spite of not getting an official result?
SV: I looked at it in two ways, either be upset, pack my bags and go home, having wasted five months with nothing to show for it, or take the blue number board as an unofficial rider, get the experience, and go home with my pride, character and honour! I opted for the latter because these mean more to me than a medal! I am very proud of that decision. When I finished I had grown up a lot… no medal will equal that.

MA: We believe you recently rode the Old Mutual Joberg2c for the second time, to raise funds for the education of Lelethu Zulu, daughter of the late Gugu Zulu?
SV: My relationship with the Zulus stems from the fact that I led Gugu up the mountain that he unfortunately did not come back from. When I met his family, his mother said that at her age she was not going to be able to fully provide for both Lelethu and Letshego (Gugu’ s wife), so she said, “If there is anything you can do to help, please help.” Those words still echo in my ears today.
The emotion of riding for Lelethu kept Alec Riddle and myself going when days were really tough. Knowing that with every pedal stroke a needy child might get a chance in life made the suffering for nine days worth it. I am disappointed that we did not raise more, but I am happy that we at least tried, and I am very thankful to those who donated to the appeal. I am not done with that yet, and I will be taking on another mountain climbing adventure aligned with the same initiative now in June.

MA: Any items still on your cycling bucket list?
SV: Alec and I would like to return to Wine2Whales to ride it properly, because three years ago we had a dismal show! Ha, ha, ha, ha, he fell more than I did, so he was not impressed!

MA: You said a while back you wanted to learn to swim and then take on triathlons. How is that journeyprogressing?
SV: Triathlon is still top of the list, and my swimming is a work in progress. It is the only skill I need to work on, and then I will announce my year of tackling a triathlon event.

MA: After all your adventures, is there anything that ‘The Lion’ is afraid of?
SV: The one thing I am afraid of is the thought of saying “I wish I did that.”