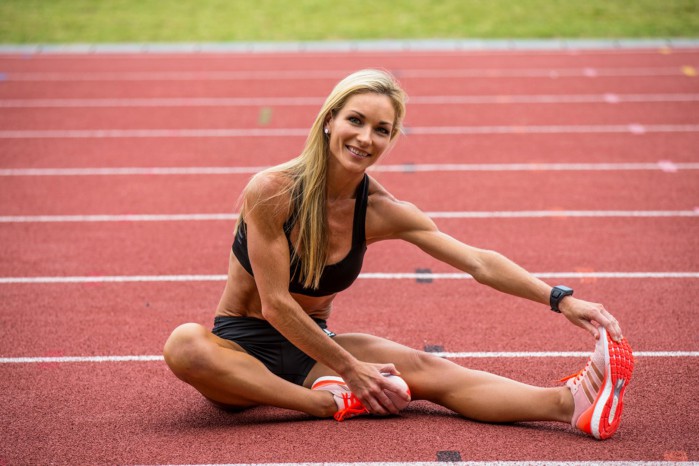 One of the highlights of the 2017 Old Mutual Two Oceans Marathon was Jenna Challenor finishing second overall and first South African in the women’s race, in her debut ultra-marathon, but few people know how hard she had to work just to be able to line up for the race. – BY SEAN FALCONER

Running a 56km ultra-marathon for the first time and finishing as runner-up is an incredible athletic feat in itself, and Durbanite Jenna Challenor deserves credit based on that alone… but achieving that on top of being a mother of three young girls, having to overcome an injury in the weeks leading up to the race, and overcoming the disappointment of only just missing out on the Rio Olympics a few months earlier, make Jenna’s feat all the more remarkable. And she did it with a smile on her face most of the way – it was only in the last few kays that the strain began to show on her face!

Jenna moved up into second place around the 27km mark when she overtook Tanith Maxwell, and says she only realised she was second when the ‘2nd Female’ bicycle went with her. “I really didn’t expect it, but I just backed myself to stick to my plan. I didn’t know the gap to the Belarus leader, or how far behind me Tanith was, and I didn’t know Caroline Wörstmann had pulled out, I was just running my own race and enjoying the moments. That’s because I didn’t have a goal position or time in mind, I just wanted to stick to my plan in my debut. I had taken all the pressure off myself because you can do that in your debut… there are no expectations on you, and you can just test it out.”

Sporty Roots
Jenna grew up in a running family – her mom has done 10 Comrades – and ran middle distance at school while also doing lifesaving. She was part of the SA team, alongside future husband Brett, that won the Lifesaving World Champs in New Zealand in 1998. She studied teaching, but decided to concentrate on photography as a job once her three daughters, Nicolette, Rylee and Tao, were born, as it allowed her to spend more time with the kids and still run competitively. That saw her win multiple KwaZulu-Natal provincial championship titles at 10km and the half marathon, as well as in cross-country, and she competed for SA in cross country in 2009. Then in 2013 Jenna finished third in the SA Half Marathon Champs and booked her spot in the SA team for the 2014 World Half Marathon Champs in Denmark.

In 2015 she joined the KPMG Running Club, and having focused on the marathon in recent years, Jenna says she felt the time was right to step up to an ultra. “I’ve always wanted to run the Old Mutual Two Oceans Marathon, and the Comrades, and this year the opportunity arose to run Oceans as a tester and see how my body will respond. The great news is that I felt absolutely fine, and I really loved the run, even though I was a bit nervous before the start about the extra distance.”

Interestingly, she says that extra distance and slightly slower pace actually allowed her to enjoy the run more. “People often ask if I saw the scenery in this race or that race, but you don’t get to look at the scenery in shorter races. At Oceans, the pace is slower, so you can take in the incredible views and the crowd support along the route. I will admit I was worried about the extra distance, as my longest training run was only 44km, but I used the crowd support to get me through it, and the kilometres just kept coming. The last few kays were a bit hard, because that’s when the extra mileage hit me a bit, but what a feeling running into that finish! And then the incredible messages of support started coming in from the whole of SA. As I said to my husband Brett, if coming second brings you this much praise and love and support, I can only imagine what would happen if I’d won!”

Tough Times…
What most people don’t know is that Jenna had a disrupted build-up to her ultra debut, with a number of weeks out injured and much time spent with her doctor and physio. First she picked up food poisoning in Dubai, which forced her to bail at the 27km of the Dubai Marathon, and then she ran the PDAC 25km race in Durban too hard, clocking 3 minute 20 kays on the downhills, and injured her foot. And that all came after she had suffered persistent knee problems after her three previous marathons, which ultimately saw her doctors find an enlarged fat pad in her knee that was becoming enflamed after longer runs. “It took seven to eight weeks to heal after my first marathon, and again after my third one, to the extent that I had to be on crutches. Thankfully, surgery to cut it down in size sorted it out, so my knee is ‘thinner’ now,” jokes Jenna.

“But having come through that, the foot injury was a huge letdown. It felt like I just kept getting knocked back down, even though I thought I was doing everything right and working so hard. I started questioning if this is the right journey for me, or if I should just be a mom, but something in me would not let me give up. I couldn’t run for four weeks, but I was still in the water every day, pool-running to maintain my fitness, and I did bio every day as well. Mentally, I had to really buckle down to keep on the path to Oceans, but that hard work and overcoming those obstacles is worth it when you get that race where it just comes together. Somebody actually said to my coach after Two Oceans that I must have had a great build-up to the race, but it wasn’t great, it was actually incredibly hard. But where there’s a will, there’s a way!”

Naturally, Jenna says she would not have had such a brilliant run at Two Oceans if not for the support she receives, from family, friends, her coach and medical team, and her sponsors. “I believe it’s not just the athlete that succeeds, it’s the team that makes the dream work, so I owe a lot of credit to all my sponsors – KPMG offers me the opportunity to go to these races, 32Gi keep me fuelled to perform, and I just love the adidas brand. My coach Ernie Gruhn has guided not only my running, but also looks after the training of my girls, making sure it is manageable and fun for them, and I really appreciate that! Then there are my physio Wayne Holroyd and doctor Kevin Subban, who both put a lot of work in and did wonders to get me through my injuries. Wayne has been a best friend since our lifesaving days, so I probably get extra TLC as a result, but he still often tells me to eat some cement and toughen up, since he knows me so well. And I just love the Regents Harriers running group in Durban North. I’ve been doing their long runs since I was 18 so they have been a big part of my journey.”

Unsurprisingly, she reserves special praise for Brett, saying that she simply would not be able to pursue her running dream without his love and support. “Brett comes from an elite athlete background, so he knows what it takes. He often has to step in and help with the family, but he never complains. In fact, I sometimes think he believes in my dreams even more than me! He knows that I love running, that it sets my heart and soul on fire, and this run at Oceans made all the work and sacrifice worth it. I am so happy and forever grateful to everyone that helped me achieve that second place.”

Olympic Inspiration
There was one other disappointment that Jenna says actually inspired her in the year leading up to her Two Oceans debut. In the build-up to the Rio Olympics she ran a 2:37 marathon PB and was in contention for selection as one of the three SA women to run the Olympic Marathon, but in the end she had the fourth-fastest time and just missed out. “It was a big disappointment, but then again, you have to keep in mind that when I joined the Endurocad Programme, and they asked us to list our running goals, Elana Meyer still questioned me about the fact that I was one of the only athletes not to list the Olympics as a goal. I told her that I thought the Games were bigger than me, but then to get so close and miss out was a bit of a kick in the teeth… but it also motivated me greatly. I decided to back myself and see how far I can go as an elite runner.”

Of course, Jenna’s success at Two Oceans has sparked many a question about her stepping up to the Comrades this year, but she says she isn’t ready for that. “Much as I would love to run the Comrades, it won’t be this year. That would be asking too much, too soon of my body. I’m dying to run it, but I’ve only just stepped up to ultras, and think Comrades would be a step too far. Also, I don’t feel I’m finished with the marathon yet, and can still try to get faster over 42 kays. I think that when you step up to Comrades, you say goodbye to faster marathon times. So for the rest of this year I am going to focus on the shorter distances, like the Spar and Totalsports women’s races, and I’ve been invited to run the FNB Cape Town 12 ONERUN, and then I’ll get into another marathon training block towards the end of the year. But for now I just want to enjoy my Two Oceans result!”