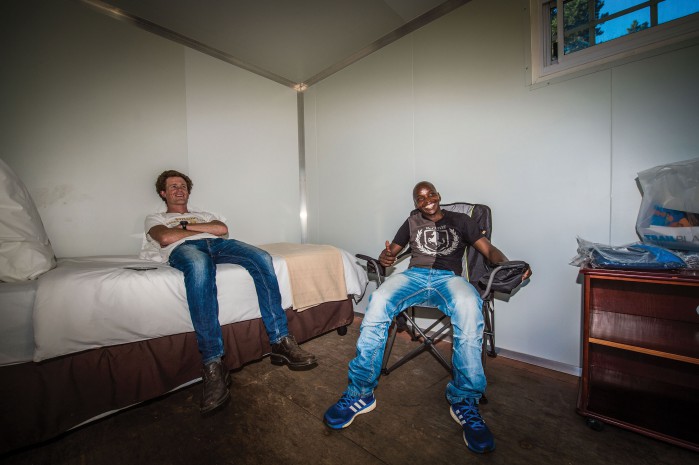 In spite of working 12-hour shifts most days at a petrol station and struggling to fit in training, suffering an injury shortly before the race and then being mugged as well, Anele Mnukwa still put in a solid performance at the Cell C AfricanX Trailrun presented by ASICS in Mid-March, and stole the hearts of the rest of the field. – BY SEAN FALCONER & JACKY McCLEAN

When Anele Mnukwa was called up on stage during the AfricanX Trailrun to receive the Sanet Wentzel Spirit Award, he wound his way through the packed hall, along with teammate Francois Groenewald, to a standing ovation. His fellow runners had just heard his inspirational story of overcoming great adversity and running through the pain barrier to be there with them, participating in the three-day stage race that he had long dreamt of running. They stood to applaud his spirit and strength, and pay tribute to a running hero.

Each year at AfricanX, the participating runners are invited to nominate one of their fellow runners (or a team) for the Sanet Wentzel Award, which was introduced in 2010 in memory of Sanet Wentzel of Oudtshoorn. She had run the first AfricanX in 2009, and towards the end of that year, just one day after phoning her running partner to convince her they should enter the 2010 race, Sanet was tragically killed by a drunk driver while out training. The award honours runners who persevere in spite of adversity.

Talent Spotted
Anele works as a petrol pump attendant in the small Western Cape town of Grabouw, just a few kilometres up the N2 highway from the AfricanX venue at Houw Hoek Inn. He started running in 2010 when his work manager noticed his running talent and asked Francois to try coach him, because he was doing well in spite of running long distances in overalls and boots. With proper running gear, Anele soon started making the podium at local Boland races, even winning a few.

“Some of his astonishing podiums came from the Bainskloof Ultra 63km, which he won by miles, and at the Matroosberg Skymarathon 36km, he managed two consecutive second places, just minutes behind AJ Calitz – all with no trail running experience or support gear,” says Francois. “He managed on a few occasions to be selected by Boland for national races in the 10, 21 and 42km distances, and he boasts personal best times of 32 minutes for 10km, 1:11 for the half marathon and 2:32 in the marathon. He also ran 3:38 in the Two Oceans, and in his first attempt at Comrades, he managed to stay in the top 15 for 70km, but had to retire eventually. His lack of training due to long shifts caught up with him, unfortunately.”

AfricanX Surprise
Originally, the two running friends had no plans to run the AfricanX, but just two weeks before the race, Francois received a wonderful surprise. “I’d had my heart set on running AfricanX with Anele since 2011. Unfortunately, we had not been able to cover the entry fee, as Anele does not earn that much as a petrol attendant. However, I mentioned our situation to one of the event organisers the weekend of the Fedhealth XTERRA Grabouw, and to my surprise I received a phone call the very next day, inviting us to run in the colours of one of their sponsors, Big Box Containers. I was speechless… but with just two weeks left to train, Anele and I started that same day!”

This is where the drama started. On their first training run on the XTERRA run route around Eikenhof Dam, Anele fell and seriously injured his leg, gashing his whole shin open. The injury became infected, but he told Francois he was OK to continue, so they scheduled a second training run on that Friday. However, Anele didn’t show up, and later that day Francois found out that while on his way to training, Anele was attacked by seven men who stole his shoes and watch. “Fortunately he got his gear back eventually, as it was his only training gear, but first he had to pay off one of the assailants to disclose who they sold the gear to! We were just thankful that he walked away unscathed, but needless to say, we knew that our dream of racing AfricanX and pushing for the podium would not come to fruition this year, given his injury and lack of consistent training, and our new goal was just to finish each stage.”

So the two friends headed to Houw Hoek on the Thursday afternoon to register, ahead of the Friday first stage, only to find another surprise waiting for them. “When we arrived at race pack collection, we were told there was a fully furnished Big Box container with our names on it. So instead of sleeping in tents like the rest of the entrants, we lived in luxury for the whole event,” says Francois.

Hitting the Trails
In spite of Anele’s injured leg, the pair started each day with a will to do the best they could, and they still managed a very decent placing of 12th pairing in the men’s race on the 37km first stage, 12th again on day two (33km) and 14th on the final day, over 23km, giving them an overall finishing position of 10th in the men’s category. Running in their colourful Big Box team colours, the pair really stood out from the crowd as they powered their way along the trails, still managing to smile when a camera was pointed at them.

According to Anele, it is the challenge that attracts him to trail running, and he says running the AfricanX was a dream come true. “I really enjoyed the AfricanX Trailrun, especially because Francois and I run really well together. Unfortunately this year we couldn’t go as fast as we wanted to due to my injury, but next year we will not hold back. Also, sleeping in the Big Box container was very special. We were really fortunate to be treated to such luxury. And I am really grateful for the Sanet Wentzel Award that I won during the Stage Two prize-giving. It has motivated me to train harder and really give my all at the 2018 AfricanX Trailrun.”

Francois echoes his teammate’s sentiments, saying, “Our AfricanX experience generated mixed emotions. Not being able to compete on our usual level due to my partner's injury meant that we had to postpone any ambitions for a podium finish, but we were still exposed to a realm of support and sportsmanship like never before. The support received from Big Box and the Stillwater Events organisers surpassed our highest expectations.”

The great news for Anele and Francois is that Big Box has extended a free entry to them for the 2018 race, and Big Box has already committed to once again sponsor their container accommodation. “The teaming up of Francois and Anele is really special, because it’s a partnership that is built on a friendship between two individuals who have totally different backgrounds, but share the same passion for running. We will continue to ‘run this road’ with this very special team and have already offered them a Big Box entry into the 2018 Cell C AfricanX Trailrun.”