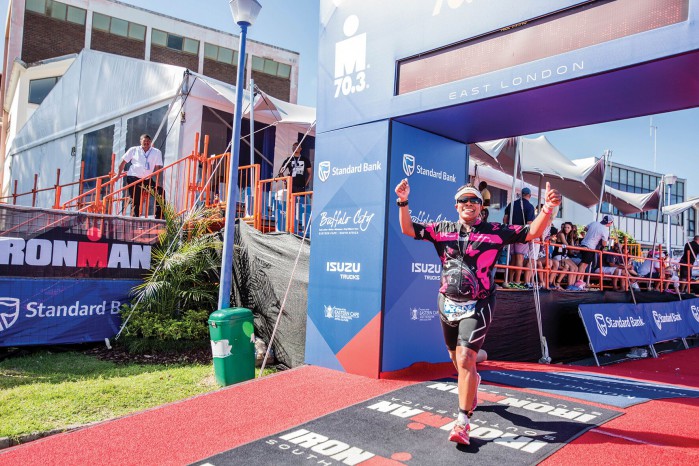 When 47-year-old Esther Patience crossed the finish line of the Standard Bank Ironman 70.3 in East London earlier this year, she finally completed an epic five-year quest to earn that finisher’s medal! – BY SEAN FALCONER

Having run both the Up and Down Comrades as well as various other ultras, Esther was looking for a new challenge in 2011, when she began to notice a number of good-looking athletes training around Johannesburg. She later found out they were triathletes. “I decided I wanted to look that good, so even though I couldn’t swim, and had last ridden a bicycle years before, I decided to take up triathlon. In fact, I decided that I wanted to do the Ironman!”

Later in 2012, having moved back to the Cape, somebody suggested she join Steve Attwell’s Embark training group. “I told Steve I can’t swim, and in the first 300m time trial swim, I swallowed a lot of water and missed the cut-off time! Still, my plan was to tackle the 70.3 Half Ironman in 2014 before going for the full Ironman in 2015. Learning to swim was just a minor obstacle! When we went up to Clanwilliam for the Freshpack Fitness Festival in October, Steve made us beginners do the 1.5km swim in the morning. I was lapped by the 3km swimmers, but after that I had a fantastic race in my first tri that afternoon – the 800m swim felt easy by comparison, even though I again came out of the water last. I then did the Slanghoek and Jailbreak triathlons, and I felt confident that I could take on the 70.3 in January 2014.”

“In East London I had a fantastic swim, 1:01 for 1.9km, but I had forgotten the 700m run to transition, so it was already 1:10 on the clock by the time I was out of transition, which left me exactly four hours for the bike. I was halfway at 4:30, so I had 1:30 to finish another 45km, but the wind turned and at 60km I had one hour left and knew I couldn’t make it. At 82km I already knew I had missed the cut-off, but I rode till 88km before they took me off the route. The guys were very apologetic for making me quit, and I cried the whole way through that 2km drive.”

Disappointed but undaunted, Esther made a new goal for herself: Finish the bike leg! “T2 became my new goal and I even blogged about the red carpet having to wait.” So she rejoined Embark, now with the Somerset West group under Coach Japie, and focused on her cycling. When the 2015 70.3 came around, Esther had an even better swim, improving by five minutes and feeling confident she could make the bike leg this time… until she broke her derailleur hanger at 37km and was forced to retire. “My cousin has been with me to every single tri since I started. We had cried and drank together after 2014, and now in 2015 she had taken the supporters’ bus to halfway, but never knew I had bailed. So again we cried together.”

Training for the 2016 race, Esther started getting niggly injuries, and eventually Japie suggested she rather do the Durban 70.3 later in the year, but rough seas saw the swim leg in Durban cancelled. “I had a fantastic bike, then a great run, and finished in 5:58, but I didn’t feel like I had done a 70.3, and it didn’t give me confidence for East London, as the bike leg in Durban is much easier, so I had to keep on working!”

Fortunately for Esther, she literally swam into a new training partner, Nicol Carstens, in the sea off the Strand Beach in 2016. “Two guys swam into us one day and I then saw Nicol post about it on Facebook. It took a while, but I eventually made contact and convinced him to join our group. Turns out we both struggle with the swim – I’m slow, he’s afraid, because he almost drowned at 70.3 and ended up in hospital – and we became training partners and best buds. I finally had a training partner that I could stay with, so I started enjoying the bike training.”

On the home front, Esther was now not just fitting her training around her work schedule – she is an IT specialist for Nedbank – but was also playing mother and nurse. “I inherited a child when my sister passed away two years ago. Her teenaged daughter went to live with my parents, but then my father was diagnosed with prostate cancer in December 2014, so my parents and niece moved in with me. He then became paralysed in June 2016, and those were hard times, as my dad was not sleeping well and I was often up in the middle of the night, but we moved our training venue to my house so that I could still go for a ride, come back to move him, and then go for a run.”

“My dad passed away on 10 September, and I wanted to do the Cape Ultra Tri in his memory two weeks later, but I got sick and the doc said no race. I wasn’t going to race, but changed my mind because I knew Nicol wouldn’t do it without me. I did OK in the swim, 56 minutes, and he waited for me in transition, but I had no legs in the bike, and on the second lap he shouted at me to pick up my pace. We finished just before the cut-off, then made it through the run, but I knew it meant I was still not ready for East London.”

Again fortune smiled on Esther when she signed up with cycling coach Morne Bester three months before 70.3. He cut her training down, which initially worried her, until she realised her legs were no longer sore all the time, and she soon saw her results improve. “Now I could actually overtake people on hills, which gave me confidence for 70.3.” Still, Esther barely slept the night before the big race, and then during the swim she was repeatedly bumped by a girl swimming just behind her, which caused her calf to cramp when she was surprised by another sudden bump.

She came out of the water in 1:03, knowing she had to be out of transition by 1:10 if she wanted to make the bike cut-off, so she was stressing, and worrying about her calf, but she ran out of there by 1:10. “I now had 4:05 for the bike and knew there was no time for dawdling. I was riding hard and overtaking people, but my virtual partner on my watch was telling me I was in the red, behind the required pace. I had problems with the strict drafting rule, as the big guys would pass me on the downhills, and then I would pass them again on the climbs, but I rode with a man in a pale blue shirt for a while and that helped me. By 60km I was in the green for the first time and felt OK… until my chain came off. Luckily the man in blue came past right then and stopped to help me, and it took less than a minute to fix, but now I was back in the red. From there I just chased hard to keep the man in blue in sight, and at 88km I was in the green by a minute. That’s when I knew I was going to make it, and I entered T2 after 5:13:25, less than two minutes before the 5:15 cut-off.”

Now Esther had another problem: Her one foot had become enflamed during the bike leg and she was limping badly, but the doctor managed to rub it back into life while other race volunteers helped Esther calm down and change into running kit. “Steve had told me, kill yourself on the bike, or the disappointment will kill you when you miss the bike-cut-off… and now I was going to limp 21km if I needed to! Luckily my foot soon recovered, and the run actually felt like a victory lap. I stopped and hugged everybody that I knew, because they all knew how hard I had worked to make the bike leg.”

“Coming into the finish, I passed the Embark group, all screaming for me, and that was actually better than the red carpet. In fact, by the time I realised I was on the red carpet, I was already almost at the tape, and I was on such a high that I actually ran past the medals, and had to be called back. Getting my bike out of T2, I met the man in blue again, Brian Bailey. I still need to track him down, because he played a significant role in my finish. If I had wasted another minute on that chain, there’s a good chance I would not have made it, and I still want to thank him properly. That night everybody wanted to have a celebratory drink with me, and I remembered my cousin saying two years earlier, if this is how you party after not finishing, wait till you finish! Well, the long-term goal remains to do the full Ironman in 2018, and then we will really celebrate!”