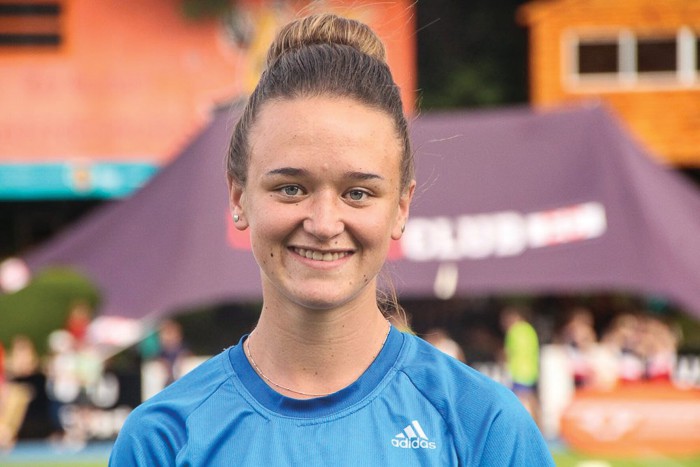 Young KPMG athlete Nicole van der Merwe was destined for running stardom as soon as she ran her first race in primary school. Now 18 and with numerous SA title and honours already to her name, she stands on the verge of a great career in the senior ranks. – BY KYLE DEELEY

By the time she was 10 she had been invited to join the training group led by Deon Swanepoel at Marais Viljoen High School, where she continued to train for the rest of her school years, and Nicole says a lot of her success is down to Deon’s coaching. “He has helped me keep my mind in the right space and to stay positive throughout any injuries and obstacles I have had to face. By doing so, my body has gotten stronger and I started performing well on the big stage.”


The inter-house athletics meet at the primary school offered an opportunity for all the kids to run, but when seven-year-old Nicole blitzed her way around the track, her parents realised their little girl was something special. “My parents knew straight away that I could be a good runner and they were very fast in getting me with a personal running coach. Both my brother and I joined Jean Fowlds at Randhardt Primary School for personal coaching, and since then we have gotten better and better,” explains Nicole.

That success includes winning the 2016 SA Junior Champs under-19 titles at 3000m and 5000m, as well as the bronze medal in the 1500m, having already won the 2016 SA Schools titles in the 3000m and 5000m, and the Central Gauteng Schools under-19 titles in the 1500m and 3000m. At the 2016 SA Senior Champs, she placed sixth in the 5000m. On the road, she won the SA Junior 10km title in 2015 as well as the junior category of the Spar Women’s Grand Prix series, and was runner-up in the 2016 SA 10km Champs junior category. Nicole has also shone in cross country, finishing second at the SA Champs in 2015 and winning the girl’s junior 6km in 2016. That saw her selected for the SA team to the World Cross Country Champs in China in 2015, the 2016 African Cross Country Championships in Cameroon, and this year for the World Cross Country Champs in Uganda in March.

Competing in various disciplines has allowed Nicole the opportunity to spread her proverbial wings and find her strengths, and at this stage, she says she is enjoying the 5000m on track the most. “There is something special about doing all those laps,” she says. “On the road, the SPAR Women’s Races are my favourite, but cross country is my favourite running discipline. I am addicted to nature, and of course the competition and adrenaline that comes with it makes things even more exciting. But for now my focus will remain on all three disciplines, and then as I get older I will start focussing on the road races and the longer distances, like half marathons and marathons, maybe even the Comrades Marathon one day.”

Besides the World Cross Country Champs, Nicole says she is looking forward another great year in 2017, with her planned list of events including the SA Track and Field Champs, SA Cross Country Champs and SPAR Women’s Grand Prix series. “I am looking to take on many events this year, but my main goal – if God allows it – is the Junior World Champs, and depending on my schedule, I might go to Europe later this year to participate in some track events,” she says. “I always strive for success, and I am always looking to become a better version of myself. There are many competitions coming up and I know everyone wants to win, but being better than my previous best is my main focus.”

Then in August she will be heading to the USA to begin her studies, having matriculated last year. She says that training takes up much of her time, but education remains a top priority, so time management is important, and she says she has always received good guidance and support from her parents, allowing her to achieve great heights in the athletics world. “It is a big challenge to organise everything, but the correct support system from the people around me made everything I do possible,” she says.

Looking still further ahead, Nicole says she dreams of one day representing her country at the Olympic Games and hopefully bringing a medal home, but just setting a good example to other athletes would be enough for her. “I believe there would be a sense of satisfaction in knowing that I gave it my all and the achievements are only a bonus. The biggest reward I think you can achieve is finishing a race – there is no better feeling than crossing the finish line after giving it your all! Regardless of the outcome, that is the biggest reward for me.