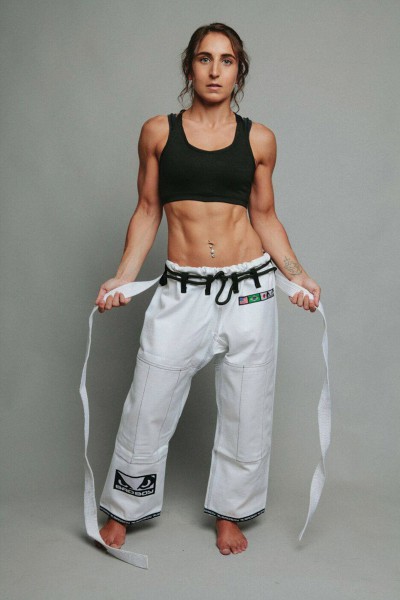 Jumping off buildings, doing fight scenes and being set on fire are all in a day’s work for film industry stuntwoman Lana Katz, and she uses a daily run to make sure she is fit enough to handle this physically demanding work.

When Lana Katz meets somebody new, invariably the conversation focuses solely on what she does for a living. That’s because stunt work for the film industry sounds exciting and dangerous. And that’s why the 32-year-old heads out for a 5km run at the start of each day, usually along the Blouberg seafront roads in Cape Town, or she hits the treadmill if the wind is pumping too hard, because she needs to be in top physical shape in order to do her job.

“I run every morning, to keep fit and lean, usually for about half an hour, nothing too hectic, because my day is quite full. The run is usually followed by an hour of Jujitsu, then an hour of yoga, with another two hours of Jujitsu in the evening,” says Lana. “The way I look at it, I train to work, and work to train, so I am always looking to increase my skills and ensure my physical fitness. The worst thing would be to be on set and you can’t do what they need, so you need to ensure you are fit enough and have the skills to do the stunts.”

Naturally, Lana also has to be in peak shape in order to fill in as a stunt woman or body double for an actor, so fitness and training are just as important in terms of looks as ability to do the stunt work, but Lana says it is more about being strong enough to take the hits. “If they need me to go down the stairs or hit the ground 10 times, I need them to know I can take the knocks. I want my body to be strong enough to last long in the industry, so being fit, eating right and looking good all make sense.”

What is even more interesting about Lana’s job is that she only took up stunt work a few years ago, having previously worked in the advertising industry. However, at the age of 27 she decided to follow a new path. “I was a senior executive on the client service side, dealing with clients, running budgets, briefing work into studio, and I had been doing that for about eight years. But I didn’t just wake up one morning and decide to become a stunt woman – a lot of other things happened in my life to push me in that direction,” she says. “My marriage of five years ended in divorce in August 2013, and that made me look at my life and question whether I was actually happy, getting up each day to sit in traffic for two hours, and sit in the office all day doing mundane stuff over and over – and just living for the weekend. It wasn’t making me happy, and I realised I was on the wrong path.

“My husband and I were supposed to go to Thailand that November, and I decided that since I had booked and paid for a holiday, I may as well still go. It was there that I met two stunt guys from the USA and chatted to them about the industry. I told them I would love to do that kind of work, but I thought it may be too late, as I was already in my late-20s, but the guys said I should just do it. One of them said that if I could get to Los Angeles, he would be happy to help train me. So, when I came back from Thailand, I got off the plane and told my parents I was going to be a stunt woman. They were a little shocked, but I think that after everything I had been through with the divorce, they saw a positive change in me.”

Lana stuck with her advertising job initially while saving as much as she could for the trip, and also attended stunt workshops while getting to know the local stunt community. In spite of her fitness and martial arts background, the physical demands of the new work unfortunately led to some injuries: She initially tore a ligament in her foot, and then when she got her first casting for a feature film, and resigned her job in order to pursue the opportunity, an old knee injury put her out of action.

“I was still working and saving, but then got the call that they needed me on a film, so I decided the time had come for me to say goodbye to the job and make the transition, so I resigned. However, I had been feeling a niggle in my knee, from a previous stunt job, and just before I was due to start the new film, I decided to go have it checked out. The doctor told me I had a torn ACL. I’ll never forget sitting in his office and thinking, great, I’ve just resigned, and I have work on a film, but now I need knee surgery.”

The surgeon said she would need a year for rehab, and that she should postpone her trip, but Lana was having none of that. “I told him I didn’t have a year, and then I really went for it with the rehab, in between doing freelance work in the advertising industry to tide myself over. I was even in the gym on crutches at one point, and I was running again as soon as possible. Eight months later the biokineticist did a strength test just before I left for the USA, and the knee was 98%. It took me two and a half years to get to LA, but it was an amazing experience, thanks to the stunt community being so welcoming. I was like a sponge for three months, just learning as much as I could, about martial arts, firearm, horse, stunt driving and open water SCUBA stunt work, and I am still constantly learning. I just love the challenge of the work.”

Lana says there is a lot of work for stunt performers in Cape Town these days, with a number of studios in the city and a lot of foreign films, series and commercials being shot here, but there are never any guarantees. “You could get a phone call for a two-week shoot, or just for one day, or you may go a full month where there is just no work, so it’s a very up and down industry, and very seasonal. That’s why I am supplementing my income at the moment with waitressing, which works for me because I can put in shifts when it suits my schedule, and I can get my shift covered when I need to go for a casting or a shoot, or a stunt workshop or training session, which often come up at the last minute.”

“I am still very young in the industry and just establishing myself, so I am just making the most of the experience. It has been difficult going from a nine-to-five job with a guaranteed salary, to not knowing what could happen next, but I’m happy, because the days that I get to be on set make it so worthwhile. I gave up that other lifestyle because being able to do what I love is what’s important.”