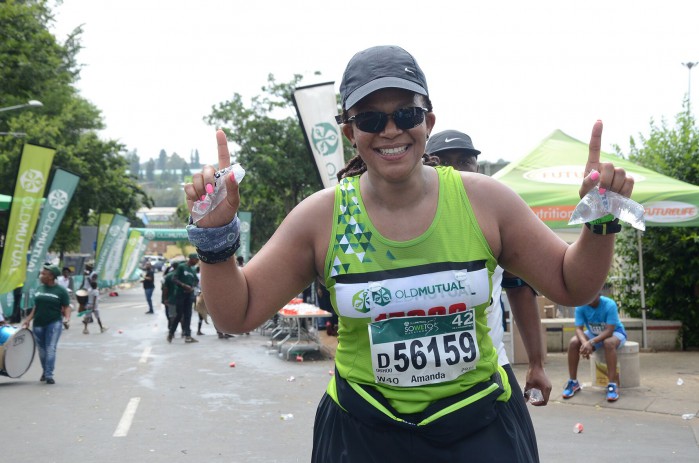 As a project manager for Old Mutual, Amanda Makwakwa has worked on many of the biggest running events in South Africa, and that not only got her into long distance running, but motivated her to tackle the biggest ultra’s in SA. – BY RACHEL PIENAAR

It was pretty much inevitable that the running bug would bit Amanda Makwakwa hard, given that much of her working career has focused on various running or walking events. Having studied marketing at PE Technicon, she found herself in Johannesburg working for the sponsorship team at Discovery, with one of their main events being the Discovery Walk the Talk. “When I began to work at Discovery, I think that’s where the healthy living started. My sponsorship properties have always been health and fitness, which fitted my personality and the way I do things.”

Amanda then joined the Old Mutual Sponsorship team in 2009, where she again got to look after various endurance events, including the Old Mutual Soweto Marathon and the Old Mutual Om Die Dam Ultra. Being around these events and all the runners rubbed off on her, and that motivated her to take up running herself, doing 5km, 10km and eventually 15km events. However, it was trip to the Comrades Marathon to work at the Expo that really got her running going.

“I’d been going to Comrades Marathon Expo for three or four years as a marketer, but one day I decided I wasn’t going to go home straight after the Expo, and instead I went along the route with everyone on race day. I think that really introduced the love of running for me. I remember walking out of there after the race and saying I think I should do Comrades too. At the time I hadn’t even done a 21km, so when I came back I made the decision to take my running more seriously.”

Amanda proceeded to rope her older sister in as a running partner and together they would tackle at least one 10km race a month. Seeking out new challenges, Amanda then ran her first 21km in 2016 at the Dis-Chem Half Marathon. “I remember cramping so badly and I was thinking oh-my-gosh, I still have 5km to go, but I finished it.” She says that made her realise she needed more training if she was going to attempt a marathon in the future. “Luckily I found a training group who meet at the Wanderers Club four to five times a week, usually in the morning, which suited my schedule perfectly.”

When the entries for the 2017 Comrades opened, Amanda decided to go for it. “When they launched entries, I looked at it and said is it this year?” She had not attempted a marathon yet, but had a good few 21km races under her belt, and motivated by her desire to run the Comrades, she roped another novice running buddy into doing the Sanlam Cape Town City Marathon with her. Even though she struggled during the race, Amanda says she switched off the negativity and pushed through to the finish. “I ran and walked and ran and walked till I got to the end, and once you get onto the blue carpet you are like, I have arrived! Suddenly you have this amazing feeling. When I finished, I remember my legs just locked – I couldn’t move – but I was so excited to have finished, and I think this gave me even more motivation to carry on with running.”

Knowing that she could now conquer a marathon, Amanda decided to take the plunge and enter the Comrades. “I looked at the registration and said to myself, maybe I’ll cancel later, but at least I know my entry is there.” Soon after that she decided to also enter the Old Mutual Two Oceans Ultra, and she hasn’t been afraid to tell people of her goals. “I have been using the hashtag #TheYearOfHighRisk, because I am going big this year!” That also saw her change her approach to training, with regular time trials to work on speed and track her improvements, on top of longer training runs.

Even though she is still looking for that all-important qualifying time to be able to run the Comrades this year, Amanda says she is simply enjoying the running journey she is on. “Because I am doing what I love, working in the running space, it is a no-brainer that I run myself. I really love what I do and I really enjoy running, so it doesn’t feel like an effort, but rather a perfect fit for me. Even though there may be challenges, I probably don’t even recognise them as challenges, because it’s just part of who I am in my daily life, because I just get to do what I love.”