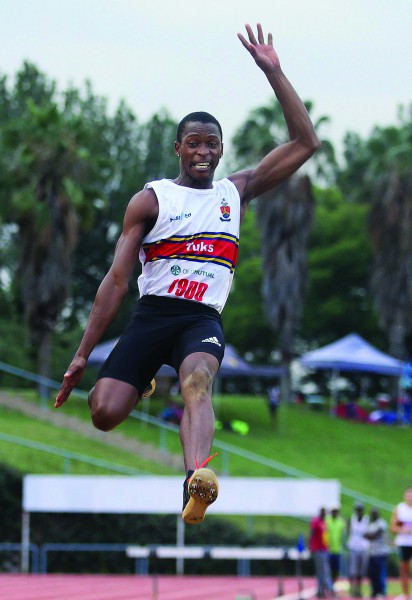 Not so long ago it appeared that long jumper Luvo Manyonga’s athletics career was over, but after turning his life around and completing a remarkable comeback, he won a silver medal at the Rio Olympics, and now he is aiming for still more honours. – BY KYLE DEELEY & SEAN FALCONER

A top level athletic career is usually only a few years long, and it can take an athlete a number of years, including those all-important formative years in the junior ranks, to work up to the level needed to compete at Olympic, World Champs and Diamond League level. Many athletes then only stay at that level for a short period of time, so they have to make the most of their peak athletic years, and thus losing a few years for a positive drugs test can spell the end of an athlete’s career, because coming back to top level competition can be even harder than getting there in the first place.

That said, long jumper Luvo Manyonga didn’t just come back to compete again. He went all the way to the Rio Olympics last August and brought home a silver medal thanks to his soaring 8.37m leap. “The Olympics for me was the most incredible thing I have ever experienced. I had an incredible few days and I knew it was my time to reach for the stars. I knew I had what it took and I made sure I did what needed to be done,” says Luvo, typically humble about what is one of the ultimate comeback stories!

Jumping to Stardom
Luvo’s athletic talent was spotted when he was attending Desmond Tutu High School in the Mbekweni township on the outskirts of Paarl, in the Boland area. At the 2009 Boland regional track and field champs, he was closely watched by the late Mario Smith, then one of the coaches at the University of Stellenbosch. “Mario noticed my talent after watching me jump, and told me I had the most perfect technique he had ever seen, and that I had serious potential,” says Luvo.

That saw the youngster start training with Mario at Maties, and his first international success soon followed at the 2009 African Junior Champs in Bambous, Mauritius, where he jumped 7.49m for the bronze medal. He ended the year with a new best of 7.65m, then broke through the eight-metre barrier in 2010 with a massive 8.19m jump in Germany, which is still the African and South African Junior Record, and followed that with a 7.99m jump to win the gold medal at the 2010 Junior World Champs in Moncton, Canada.

With a bright career seemingly ahead of him, Luvo turned professional in 2011, and describes it as a major milestone: “Competing as a professional was incredible. I met new people and had to compete against some of the best in the world, and this for me was an amazing achievement.” In July that year he jumped 8.26m in Finland, climbing to second on the all-time SA list, then finished fifth with an 8.21m jump in the final of his first Senior World Champs in Daegu, South Korea. Just two weeks later he was in action again at the All-Africa Games in Maputo, Mozambique, winning the gold medal thanks to an 8.02m jump, and he says “This was possibly the greatest experience of my life to that point. I had won my first real gold medal.”

From Hero to Villain
But then it all went horribly wrong. In March 2012, following drug testing at a national meet, it was announced that he had tested positive for a banned substance. However, instead of it being for one of the usual performance-enhancing substances, it turned out to be the recreational drug ‘TIK,’ a local variant of Crystal Methamphetamine, which nevertheless can still give an athlete an unfair advantage over ‘clean’ athletes.

The story began to emerge of a troubled soul, struggling to balance the life of an international sporting star with his difficult poverty-stricken upbringing in the township. Family and friends had quickly come to rely on him financially as he met with success, and that, combined with his recreational use of TIK since 2011, quickly saw him descend into deep debt. That prompted Mario to start supporting Luvo’s family at his own expense, so that his jumper could focus on training, but by then the drug addiction was taking over.

“All of a sudden I felt this massive burden, because supporting both my friends and family financially was overwhelming for me, and being a regular user of TIK did not help. It is terribly hard to stop the addiction, and the more I tried to overcome it, the more it took over my life,” says Luvo. “I was actually incredibly lucky to have placed fifth in the World Champs in 2011, and it came as a huge surprise, due to the fact I had struggled to train for the competition, as I was sidetracked by my friends and the underworld of the Mbekweni Township.”

Having tested positive, Luvo admitted to an addiction and agreed to drug rehabilitation, and at his doping hearing, Mario’s compelling mitigating argument that Luvo’s poor family situation had contributed largely to his drug-use, instead of a deliberate attempt to enhance his performance, saw the tribunal set a slightly reduced 18-month suspension as punishment, instead of the normal 24 months. “There can be no disputing that the Athlete is at fault… but the exceptional social circumstances that many black athletes encounter in South Africa cannot be ignored,” read the tribunal summation.

Tragedy to Triumph
In 2014, just as Luvo was starting to make his comeback, tragedy struck when Mario was killed in a car accident while driving to Paarl to visit his athlete, and Luvo’s life once again spiralled out of control. Fortunately, national Olympic body (SASCOC) president Gideon Sam visited Luvo’s home and was shocked by the situation, so arranged for Luvo to move to the University of Pretoria’s High Performance Centre. “This was a life-changing move for me. I received accommodation, meals, sport science, medical assistance and coaching, and along the way made a number of friends. Being in an environment with a bunch of elite athletes that train together is motivating and inspirational,” says Luvo. “The temptations that go with staying in Mbekweni were the contributing factor. I needed to be taken out of the township’s environment in order to focus on getting better and overcome my addiction.”

By mid-2015 Luvo was back in full training, and in 2016 he returned to official competition for the first time in some four years, having set himself the goal of trying to qualify for Rio. Remarkably, in March he jumped a then world-leading 8.30m in Pretoria, went over eight metres again in his first Diamond League meet, then took the silver medal behind SA team mate Rushwahl Samaai at the African Champs in Durban. Having qualified for Rio, he managed to put his chequered past behind him as he posted that majestic 8.37 silver-medal PB jump, but now he is already looking ahead to the next challenge: “Rio was great and I was stoked with my performance – to date it was my most memorable event – but with that now behind me, I am focused on 2017, and taking gold at the IAAF World Champs.”