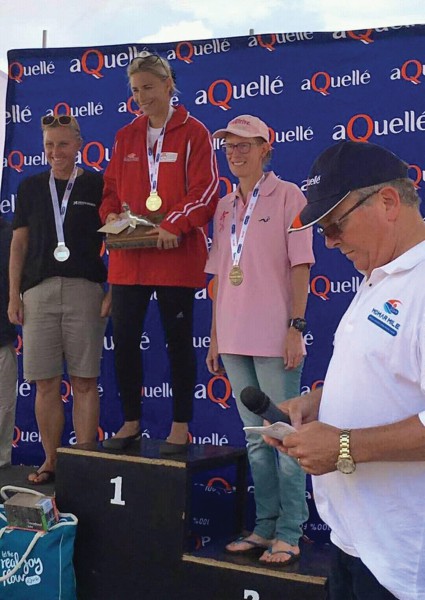 If you followed triathlon in South Africa in the 90s and into the 2000s, you definitely would have spotted Dominique Donner-Rodd. Not only was she was one of the leading female triathletes in the country, but her stunning looks also saw her grace many magazine covers. Today she is retired from competitive triathlon, but is still involved in sport as a swimming coach as well as Project Manager for the Princess Charlene of Monaco Foundation in South Africa, which will see her taking on another big swimming challenge this February. – BY RACHEL PIENAAR

Last year at the a’Quelle Midmar Mile event in KwaZulu-Natal, a group of 20 swimmers pledged to swim eight miles each to raise awareness and funds for the Princess Charlene of Monaco Foundation. Created by former South African Olympic swimmer and now Princess, Charlene Wittstock, the Foundation works to promote water safety and drowning-prevention education for children and their families, because drowning is a leading cause of unnatural deaths in children. One of the swimmers in the group was former SA triathlon champion Dominique Donner-Rodd, who has been friends with the Princess since 1996 and now heads up the South African chapter of her foundation, based in Ballito in KZN.

As a former competitive swimmer, a swim coach and a mother, Dominique is passionate about this cause, and says “I will be swimming eight miles again this year, along with 27 other amazing swimmers who will each be raising funds for the Foundation to continue its mission of promoting and providing water safety education and learn-to-swim opportunities for the children of South Africa. The Foundation is honoured and privileged to be a beneficiary of the 2017 a’Quelle Midmar 8 Mile Charity Club once again, and the money raised will be used to fund our ongoing learn-to-swim programmes. I’m really looking forward to the challenge, which I have trained hard for.”

SPORTING STAR
Growing up in Cape Town, Dominique showed great sporting ability from a young age. While at school she earned provincial colours in swimming, biathlon, life-saving, netball and squash, and went on to earn national junior colours in biathlon and swimming. Having already been introduced to multisport through biathlon, her next step was into the world of triathlon, but it was not the most auspicious start. “My triathlon career started in 1989 at the Constantia Health and Racquet Club with a sprint distance race consisting of a 100m pool swim, 20km bike and 5km run, and I was racing on a borrowed bike. I didn’t have a clue how the gears worked, and as a result had to walk up all the hills! I finished fourth-last overall, but I was hooked. My first inter-provincials were in Port Elizabeth in 1990 and I won the South African Junior title, then earned my first Protea colours for triathlon in 1992.”

That same year saw South African athletes allowed to compete on the world stage again following the end of the Apartheid era and removal of the sporting embargo against the country, and Dominique was selected as part of South Africa’s first team to go to the Triathlon World Champs, held in Canada. “It was my first taste of international competition and I was totally overwhelmed! I exited the swim in the top three, but was only 20th on the bike after transition! I was more like a spectator, in awe of the other athletes, and I finished 50th that day!”

Over the next years Dominique was a regular on the podium in local races while also pursuing modelling work, which saw her appear on many magazine covers and in TV commercials, which raised her profile, helped her attract sponsorships and then turn pro. She won a number of national titles as well as numerous provincial titles, and in 2000 was part of the preliminary Olympic squad for the Games in Sydney, along with Lizel Moore and Kim Carter, but did not get to go. “Lizel had the best ranking by two or so places, even though I beat her at the World Champs that year, and she was the only woman selected. Kim and I were bitterly disappointed as we watched the race on TV.”

On a positive note, that disappointment spurred Dom on to greater heights, and she won the 5FM/Energade series in both 2000 and 2001, and was crowned SA Sprint Champ, African Champ and SA Half Ironman Champ in 2001, while also racing some of the World Cup series events and climbing to 13th on the world rankings. In 2002 she tackled the longer distances and finished 16th at the ITU World Tri Champs in Nice, France. “That was the most memorable race of my triathlon career. The sheer beauty and severe difficulty of the course made it an experience I will never forget.”

WINDING DOWN
Dominique moved to Durban in 2003 and gave birth to son Luc in April 2004, and that saw her retire as a pro triathlete, although she still won the KZN Tri Champs three times and the Duathlon Champs twice. She also finished on the podium at SA and African Champs in 2005, and finished seventh professional in the SA Ironman competition in 2006, before taking a break from all sport in 2007 and getting married to former South African National Bodybuilding Champion Michael Rodd, with daughter Rachel joining the family later.

It was only in 2010 that she competed again, taking on the 70.3 Ironman. “I finished 10th Pro, but also realised that trying to come back into the sport at an elite level at 39 years of age is not an easy task!” says Dom. Nevertheless, she won the 2010 KZN Provincial Triathlon and Duathlon Champs titles, as well as the overall amateur competition at the 2010 African Triathlon Champs, but had to miss the Ironman in PE due to falling ill with mumps. Instead, she entered Ironman France, a bucket list event, and finished a creditable 11th Pro. After that, however, her focus moved solely to her coaching and learn-to-swim work, which she had first started doing in 1990 in Cape Town under then coach Tom Fraenkel, in his Frankie Frog Swimming Programme.

She took over from Tom in 1994 as Head Swimming Coach at the Constantia Health & Racquet and her training squad saw more than 70 athletes receiving provincial colours, of which 16 went on to earn national colours, including Paralympic gold medallist Natalie Du Toit. Today she is still coaching competitive youngsters as well as doing the important learn-to-swim work with the Foundation since 2012, and she says, “Champions come and go, but to me the real judge of my success will be the opportunities I have to be a role model and ambassador for sport, to encourage others and to be the best they can. I have been involved in coaching swimming, biathlon and triathlon for nearly 20 years now, and I remain passionate about coaching children to realise their sporting dreams, because sport has been my greatest teacher in life.”

(Footnote)
For further information regarding the work of the Princess Charlene of Monaco Foundation in South Africa and how to receive tax benefits for company donations, please mail dominique@princesscharlenefoundation.co.za.