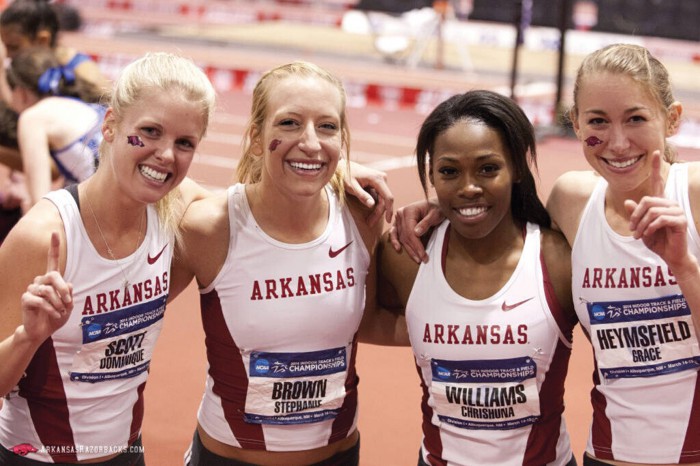 Having dominated the Collegiate track and cross country circuits while studying in the USA and qualified for her first Olympics, Dominique Scott-Efurd is now looking forward to life as a professional athlete, and aiming for more outings in the Green and Gold of South Africa. – BY SEAN FALCONER

When Dominique won a full athletics scholarship in 2011 to go study marketing at the University of Arkansas in the USA, she left Cape Town as a young athlete with three junior SA titles on the track, a lot of raw potential, and a big dream of one day running for her country at the Olympics. However, she is the first to admit that she wasn’t sure if she would reach that level, but decided to give it everything and see how far she could go. “I knew I couldn’t turn down the opportunity, even though I went there knowing I wasn’t the best athlete on the team – not even the best Freshman, for that matter. But somehow Coach Lance Harter and I found what I initially lacked in strength and speed, and we were able to get the best out of me over five years,” says Dominique.

That’s putting it mildly… Dom ended up winning five national NCAA collegiate titles and helped the Arkansas Razorbacks win their first ever indoor and outdoor national team titles, was awarded prestigious All American honours seven times, set multiple records along the way, and enjoyed superstar status on campus. That in turn was all a build-up to her making the final selection for Team SA for the Rio Olympics, where she ran a PB 31:51:47 in the women’s 10,000m to become the second-fastest South African woman of all time at that distance.

She says the Olympic race was insanely fast, nothing like what she had expected. “My coach and my strength trainer, who ran at the Olympics himself, said it was likely going to be tactical, as the big races nearly always are at championships. So they said just be brave and hang in there till halfway, and then see what happens, but it was the total opposite. It was the fastest women’s 10,000m in history – within the first 200m we were already running single file, and I was on my PB pace right from the gun – and even though I got lapped a couple of times, it was still amazing to be part of it.”

In the past year, Dom also got married to college ‘sweetheart’ Cameron Efurd at the end of 2015, and as soon as she graduated from College in mid-2016, she signed a long-term sponsorship deal with adidas, so now the 24-year-old is focused on making her mark as a professional athlete. “It really has just been like a dream come true. A lot of blood, sweat and tears went into those five years, but it was definitely worth it!” she says. “Now I feel so blessed, because I know that only a few people get to become professional athletes, and I am also blessed to be with a company that takes care of me so well. I’m truly living my dream.”

Showing Fine Form
In late December, Dom and Cam visited SA for three weeks to visit her family in Cape Town, and in between family get-togethers, sightseeing and tanning – it was snowing back ‘home’ in Arkansas when they left – Dom made the most of the glorious summer weather to put in some serious training ahead of her indoor track season starting in January. She also put her fitness and speed to the test and managed to break the women’s course record at the Constantia parkrun, then shattered the women’s 15km course record at the NutriBullet Bay to Bay race, clocking 53:59 to take just under five minutes off the previous record!

She was often asked for autographs and pictures when she ventured out to running events, and for much of her time in SA she had journalists and photographers hovering nearby – a far cry from two years ago when she actively went looking for coverage in the South African press in order to remind ASA that she was still in the mix for selection for Rio. Of course, having been selected for Rio and worn the Green and Gold at senior level for the first time, but now being married to an American and living there, the question often comes up where she now considers home, and what her plans for the future are.

“That’s a hard question, because I was born in SA and it will always be my home, but I have bought a house in the States with my husband and feel settled there. Also, when I graduated, I was no longer allowed to stay in the USA on a student visa, but when Cameron and I got married last December I was automatically allowed to get my Green Card, which allows me to live in the States and earn money – and pay taxes – but I am still a South African national, and I want to keep representing SA. But both countries are now home,” says Dom.

“Even if I wanted to run for America I can’t, because you have to have a US passport and be a permanent citizen… but it‘s not what I want to do anyway, I want to keep running for South Africa. I moved overseas to study and happened to find a husband there, so now I live and train over there, but I do not want to turn my back on SA. I worked hard to get into the South African team and had a great experience in Rio, and now I want more of that. Cam and I have discussed our plans, including when to start a family, and he understands that my focus will be on my running at least until the 2020 Tokyo Olympics, and possibly even up to the 2024 Games. I’m only 24 now, so we still have plenty of time for kids down the line.”

Things Working Out Nicely
Another reason Dom is so happy with life in Arkansas is that her successful partnership with Coach Harter is set to continue, even though she has now finished college and is no longer running for the Razorbacks. “He is still my coach, and they are allowing me to train with the squad and use the facilities. They’ve even given me a faculty parking pass, and still allow me to eat in the student athlete cafeteria. They say it improves the level of their athletes by allowing top athletic alumni to continue training there, and that also means I get to give back to the programme as well, so everybody is happy.”

Looking ahead, Dom says she reckons the 10,000m is her best event right now, but she still wants to race the shorter middle distance events on the track. “I only just missed out on the Rio qualifier for the 5000 by 1.1 seconds – and that was in my first race of the outdoor season, before I peaked – so this year I am hoping to qualify for both the 5000 and 10,000 at the World Champs in London. I believe I can run the ‘Double,’ because they’re a week apart on the programme, so there’s enough time to recuperate. Also, I’ve run good mile and 3000 times on the indoor track recently, so I think I do have the speed to run the 5000.”

Her competitive plans for 2017 will start with the indoor track season from January to March, followed by the outdoor season from April through till about September, and in between she says she may fit in a few road races as well. “I love running on the road, because I grew up at the road races in Cape Town that my mom ran. There’s not much cross country in the professional athletics world and I want to stay on the track for at least a couple more years before I make the step to the road, but I will still do some road events.”

Sounding a Bit Dodgy
Of course, the one less than fortunate side-effect of Dom’s journey is the way five years in America has affected her accent, which now has an unmistakable American tone. “I get teased about it here in SA, but then we go back to the States and Cam gets asked where he’s from, because he picks up some of the things I say. Sometimes it switches on and off, so we’re both now multi-cultural, but we just laugh off the teasing, because we’re just enjoying life.”