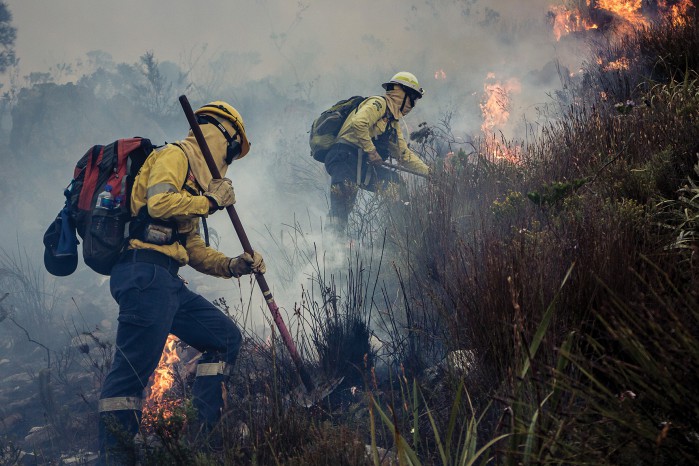 Andrew Hagen spends a lot of time in the mountains and on trails, because when he’s not running, he is often ‘on the line’ with his fellow volunteer fire-fighters as more and more wild fires rampage through the Cape region. – BY RACHEL PIENAAR

In the last few years news reports in the summer months have been dominated by runaway wild fires in the Cape, with the combination of hot, dry and windy conditions turning the Western Cape into a tinderbox. This has seen fire-fighting services stretched to breaking point, including the Volunteer Wildfire Service (VWS) fire-fighters. These unpaid men and women put their lives on hold when a fire breaks out, don their protective gear and head up mountains and ravines to fight the fires, and amongst them is Andrew Hagen, a 33-year-old Stellenbosch-based photographer and technician. He’s also an elite-level trail runner when not working or fighting fires, and thrives on tough mountainous courses.

Amongst Andrew’s running accolades are four wins in the Three Peaks Challenge in Cape Town, which summits Devils Peak, Table Mountain and Lions Head. He first won it in 2007, then again in 2009, and set a new course record as he claimed a third win in 2010. His record has since fallen, but in 2016 he posted an unprecedented fourth win. In between that he also won the 2013 Lesotho Ultra Trail Run, and placed second in the 2014 Ultra Trail Cape Town, which in turn saw him selected for the SA team for the 2015 Ultra Trail World Champs in France. “I’ve always run. At school I was never good at the shorter distances, but I took part in quite a few cross country events,” says Andrew. “It was the numerous hikes up Table Mountain that took me down the path of trail running, and I feel at home amongst the mountains.”

HEAT OF THE MOMENT
It was a close encounter with a forest fire seven years ago that led to Andrew volunteering his services as a fire-fighter. “The 2009 Jonkershoek fires burnt right to the walls of the place where we lived, and did tremendous damage while burning across the mountains for a month. My wife to be at the time, Hayley, founded the Jonkershoek Station of VWS and I was one of the first to sign up. We not only fight to protect lives, homes, trees and pretty flowers, but we’re fighting against the degradation of our mountain water catchments by repeated burning of unnatural causes.”

As a VWS crew leader, Andrew and his team are often exposed to extreme heat, steep and rugged terrain, smoke inhalation, and back-breaking work, but he says trail running has primed him for the challenge. “The mountain environment with its steep gradients and uneven terrain is already a comfort zone, my cardio fitness is better than average, and being self-sufficient is already a habit. It’s just the act of having to beat flames, dig out coals or cut a fire break all day that can sometimes wear your upper body out,” he says.

FIRE SEASON
During the winter months the VWS recruits are put through a thorough training programme, learning the tools for fire-fighting as well as a good working knowledge of the warning signs of trouble and the behaviour of wild fires. When ‘Fire Season’ starts, the volunteers go on high alert. “There is a large fire-fighting community which includes municipal fire departments, conservation professionals, contract fire-fighting crews, Working on Fire crews and pilots, and other smaller volunteer groups, all putting in long hours to see the fires brought under control.”

As volunteers, the VWS fire-fighters take turns to be on standby on the weekends, and this past January they were once again called into emergency action as fires swept through the Grabouw and Helderberg areas. “We had to dispatch 18 crews of volunteers in less than two weeks!” says Andrew, who adds that fortunately there are more and more volunteers signing up each year. “The other great thing is the public support that VWS receives. In the time I’ve been involved, I don’t remember ever having as much public support as we do now, and it makes a big difference.”

Even when not on the line, Andrew and Hayley continue to work to promote and grow the VWS Boland branch. “We both want to make a meaningful difference in the preservation of our environment, which directly affects our water supply. We hope to create greater awareness of fire risks, and ultimately, we’d really like to see fewer fires,” says Andrew. Meanwhile, he still has running goals in mind as well: “I’d like to do some of the iconic 100 mile races overseas, such as the UTMB or Hardrock, but the major goal is to just to keep enjoying it as a healthy part of my life for years to come.”

For more info on the VWS, go to www.vws.org.za.