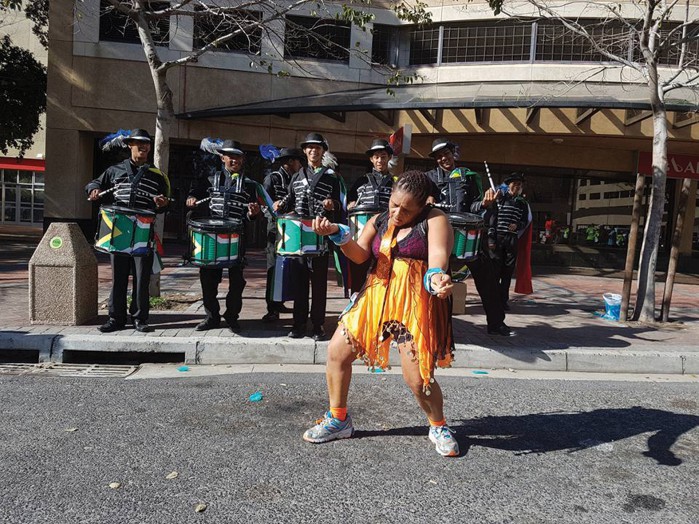 For most runners, the starting gun means start the watch and get to the finish line as quickly as possible, but for others it means start the conversation and make the run-chat last as long as possible. That’s how Michelle Cupido runs all her races… unless the music gets turned up! Then even talking joins running fast as a secondary priority! – BY KYLE DEELEY

Michelle Cupido is a regular at the back of the pack at many races in the Cape, and in spite of being quite short and thus difficult to spot in a crowd, it isn’t hard to find the 49-year-old Pinelands AC runner, thanks to her loud jokes, infectious laughter, sometimes outrageous running outfits, and quite often, rather eye-catching dance moves. Whether it’s before, during or after a race, Michelle simply cannot resist the music, and she just has to dance if she hears a tune she loves. She is thus often up on stage at the big races, busting out moves that pro dancers would be proud of. “I am an entertainer, and I just love having fun, so I just let the music take me,” says the dancing runner.

CARING TOUCH
A Capetonian all her life, Michelle grew up in Kensington before moving with her family to Mitchells Plain, and after school she went to study at the Otto du Plessis Nursing College, then landed her first job. “I started working as a part-time staff nurse at Somerset Hospital, and then went full-time a year after that. A few years later I got married and we had two wonderful kids, a son and a daughter, but two years after getting married I started going through a painful divorce, and that changed me,” says Michelle.

“I started looking for something to take me out of my comfort zone, I wanted to try something I had never done before, and eventually I thought running would be a good idea. I didn’t take part in any sport at school, and figured that it would be a nice change, so I did my first race, the 1999 Big Walk 36km from Simon’s Town to Cape Town, and from that moment on my life was never the same. I finished in a shocking time of 6 hours and 5 minutes, and to be honest it wasn’t as enjoyable as I thought it would be, but the bug had bitten, and soon I had entered my second event, a running race.”

THE BUG BITES
Running soon became a healthy addiction, because Michelle says she felt that if she didn’t run, she was miserable for the day, and that a part of her life felt missing. She began racing regularly, and in 2000 completed her first Old Mutual Two Oceans Half Marathon, in a time of 2:27:55. However, the following year she missed the then stricter Two Oceans Half cut-off of 2:30, coming home in 2:43:04, but the following year, with the cut-off now extended, another 2:43 saw her claim a second medal. Today she has 11 Two Oceans Half medals and her Light Blue Permanent Number, but she says she has never quite reached the heights of that 2:27 again.

“I have completed hundreds of races, and even won an award one year for doing 84 races in a year, but none of them were near the times they could be. I just don’t like competing with the faster runners, and pushing hard in running is not for me. Instead, I remain one of the runners at the back of the pack, talking and encouraging and pushing those who need the help. I know I have the ability to finish and I make it my goal to help others to do so, too, because I know that running as a whole is just a life-changer,” says Michelle.

CONTINUED GROWTH
Another result of her divorce saw Michelle pursue her goal of becoming a registered nurse. She had left Somerset Hospital to work at the Life Health Care Hospital while doing the bridging course, but that didn’t work out and she moved on to the Groote Schuur Hospital, where she eventually achieved her goal in 2014. “It took me two tough years of studying and it required a lot of effort and sacrifice, but I learnt a lot and it was another life-changing experience.”

Besides time with her kids, the other thing that Michelle would not sacrifice during her studies was her running. “I still made time to get out on the road, because I just love talking to all my fellow runners, at training runs or races… but I really go crazy when I hear music, and that’s my biggest distraction when it comes to a race. Music transforms me and sends me to a different planet, and then I just have to dance!”