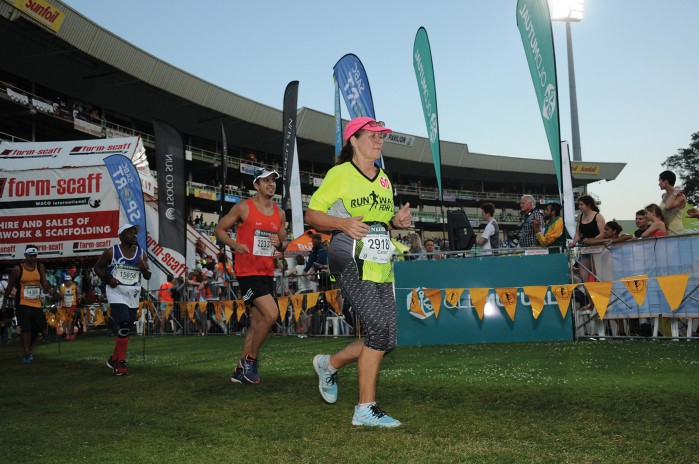 I’m conviunners do not need carbs and pasta parties, nor expensive ‘high-heeled’ running shoes with all those all support structures, and here’s the proof. – BY FRANKIE HUNT

I am a 65 year old runner who has been actively involved in running for some 30 years and have in the process, among other things, earned a Comrades Green Number. I currently run a Run Walk For Life branch in Gauteng, and when I was asked by 60-year-old Carol Downing to help her to achieve her dream of successfully completing the Comrades Marathon, I saw this as the ideal opportunity to test some of the things which have worked for me, to see if they would work for Carol as well.

Carol had attempted the Comrades unsuccessfully on two previous occasions, in 2013 and 2014, in spite of following the training plan of a very well known coach. Not only did she follow his programme, but also got to know him personally and received personal advice from him. The best she had done was to get to the 60km mark, so I thought for me to help her was a bit of a long shot, to say the least. That said, she was a very willing and dedicated athlete and gave our venture her all.

Making Changes
She had in the past continually suffered from irritating injuries, which hampered her efforts, so the first thing I did was to change the way she ran by putting her into Nike Free minimalist shoes. Although runners are advised to take it slowly when crossing over to minimalist shoes, like me, she took to these shoes like a duck to water, and the injuries became something of the past. For a long time I have been of the opinion that all the fuss over running shoes with all the support structures is unnecessary, and it came as no surprise to me when I learned that 2016 Comrades winner and new Down Run record holder David Gatebe, ran the race in shoes from Mr Price Sports which cost under R500!

The next thing was to change the way she ate. To this end, I put her on to the Banting diet, which meant avoiding carbs as much as she could and taking in more fat. This was something which has saved my running life, but that is a story all of its own.

Hitting the Trails
As far as the actual training was concerned, we spent the best part of January to March running on trails, completing a five-day stage run in January, and in March we did the three-day AfricanX trail run down in the Western Cape. The reason for the trails was that I am convinced that it strengthens the body more than road running does. After AfricanX, we switched to the road, and she completed a total of just under 1,500km in the five months leading up to Comrades. In those five months Carol only completed two full marathons, and no ultras. The shorter runs of between 10km and 15km in the week were done at six and a half minutes per kilometre, and the longer weekend runs at seven minutes per kilometre. We figured that if she could comfortably do the longer runs at that pace, it would make it easier to be comfortable at running Comrades at our projected pace of just under eight minutes per kilometre.

Throughout our training, Carol stayed on the Banting diet and we experimented with food on the run, trying things such as bacon biltong, beef biltong, dried sausage, cheddar cheese and water. Although the bacon worked best for me, in Carol’s case she went with dried beef sausage, cheese and water, which is also what she ran Comrades on.

Racing Strategy
Our aim was for her to complete the run with about 10 minutes to spare, and she ended up coming in with just over half an hour to spare, in 11:28:12, but the important thing is that I saw her at three different points on the course and not once did she even go through a bad patch. She came into the stadium in Durban with a smile on her face, saying she could have done another five or 10 kilometres if she had to! What’s more, her feet were just fine in her Nike Frees, and I can tell you that the next day she hobbled around much less than many half her age on Umhlanga beachfront!

Ed's Note:  We decided to publish this article because it makes one think. Does one strategy, or diet, or type of shoe, fit all runners’ needs? I think not, and what works for Frankie and Carol may not work for others… but that is what makes it so interesting, because it’s worth experimenting in your training to see if you too can find the right mix that will ensure your running success.