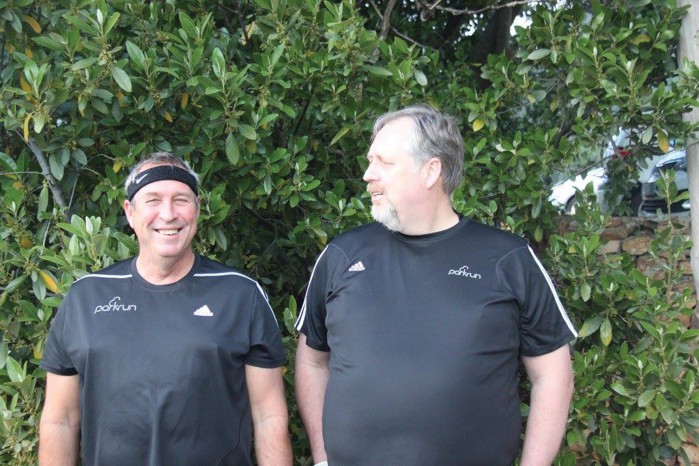 When the extended Doyle family of Somerset West get together for a running event, you’re sure to hear plenty of jokes and laughter, but they’re serious about their running, especially when it comes to parkruns… although they have been known to attempt a marathon here and there. – BY SEAN FALCONER

When the Root44 parkrun was established in Stellenbosch in 2014, the organisers used to joke that if the Doyle family of Somerset West were ever to miss a Saturday morning run, the Root44 field would be half the size. That’s because the Doyles had made such an impression on everybody thanks to their regular participation. Bothers Colin (a nuclear technician, now 57) and Trevor (a financial advisor for Discovery, 46) would be there, along with Colin’s wife Lynn and kids Barry (22) and Mark (19), plus Trevor’s wife Lynn and kids Mia (16) and Nathan (14) – and when Root44 celebrated its first birthday, the Doyles were even given a special award for dedicated attendance!

The Doyle brothers are not your typical runners, and they are the first to say so. They openly joke about their build, and the fact that they are really good at letting gravity help them maintain speed on the downhills, and it is this irrepressible sense of fun that they bring to every run they do… which includes a lot of parkruns. You see, they are both members of the exclusive parkrun SA Tourist club, a group of runners who have run 20 or more different parkruns around the country, and the kids are part of the club, too (or nearly there).

At the time of writing, Colin had done 138 parkruns on 35 different routes, while Trevor was on 158 and 38 respectively. Mia, who has earned junior provincial colours as a runner and is a regular on the podium at trail events, was on 105 runs on 22 routes, with Mark, who is studying applied mathematics at Stellenbosch University, on 75 at 22. Young Nathan, in spite of actually being more of a swimmer, was on 79 runs at 17 routes, while Barry, now working as a software developer after studying B.Sc Computing through UNISA, had done 50 runs at 15 routes. “Barry would have had more, but he has a bad habit of forgetting his parkrun barcode at home,” says Colin.

Novices to Marathoners
Colin says he did a bit of cross country at school, but his debut half marathon about 30 years ago left him determined not to run another step. “One day my friend Beau Schoeman said let’s go do a 21km, and even though he let me beat him, it was very tough, which put me off running for life. Until parkrun. Lynn had started walking the Root44 parkrun and I joined her after about seven weeks, as did the two boys, who were both athletes at school and who ran the 2014 Gun Run 10km together after a few parkruns. Then we were on holiday in George and Barry asked me to sign him up for the Sanlam Cape Town Trail 20km, so I just signed up as well.”

Having used the Spur Winter Trail Series for training, Colin duly lined up for the 20km, but shortly before the start he realised his two mandatory race wristbands were still in his car, parked a few kays down the road, so he had to sprint to go fetch them. Trevor, who was due to run the Sanlam Cape Town Marathon the next day, had come to support him, and says they gave an exhausted Colin a lift back to his car after the race. “The kids were hanging out the windows, because I think his sweatband was decomposing, and then we had to dangle a Coke in front of him to get him up the stairs at the Waterfront.”

Before he took up parkrunning, the furthest Trevor had run was 400m back at school. “Running was boring, and I found team sports more entertaining. Then Mia took up running in grade 4, because she had a nice teacher who was also the cross country coach, and in 2014 I just kind of fell into running parkruns as well, because I was taking her to run each Saturday. Without parkrun, I would not have run a step. The last time I had run was playing hockey in my 20s, and I couldn’t even run a few seconds on a treadmill. I actually started doing parkrun to rehab an old Achilles injury, and in that first parkrun I think I cramped four times! Then, after 25 parkruns, I madly decided to enter my first marathon – I hadn’t even run a 10km yet! But my strategy was simple: Run 500m, walk the next 2.5km to a water table and drink some Coke, then repeat. I finished the marathon, did the Gun Run 21km the following weekend, and then finally allowed the doctors to do the knee surgery I needed.”

Trevor finished his marathon in 6:42, and the following year Colin decided to also make his marathon debut in Cape Town, coming home in 6:05. Trevor was also running that 2015 race, but bailed at 36km. “I waited for Colin and walked the last few kays with him, and while he ran into the finish I went to the medical tent. When they asked me where it hurts, I told them they could just start anywhere. Still, running that far was a massive jump from when I first started running parkruns. In those days I would eventually pry myself off the ground after 30 minutes, shout at the kids to go get me food, and eventually 45 minutes later drag myself to the car. Then I would be bedridden for three days! Now I can make it to breakfast and even walk around the mall afterwards.”

Extended Family
Of course, running races here and there means the Doyles have to miss a parkrun, and Colin jokes that he is still in therapy after missing a parkrun for the first time in 2015 to go run the Two Oceans Half Marathon. The brothers say that it is the incredible vibe and family atmosphere of parkruns that keeps them coming back. “Root44 is now like the bar in Cheers for us… a place where everybody knows your name,” says Trevor, and Colin adds that “It has become a sort of hobby for us, and it’s really nice to go to the smaller, more obscure places, like Ladybrand, for the different parkruns. When a new one launches, all the Tourists get together and we always have a great chat. We’ve all become close friends thanks to parkrun.”

Looking ahead, the brothers say one of their running goals is to keep ‘collecting’ new parkruns, and they would both like to reach 250 parkruns to qualify for their green shirts – runners get a red 50 shirt and black 100 shirt when they reach those parkrun milestones. “I’d also like to redo some of the great runs I’ve done on my parkrun travels,” says Colin. Meanwhile, Trevor adds that one of his original goals was to run the Comrades in 2020, with Mia, when she turns 20. “Luckily that is no longer her goal, I think, so instead I just want to get to a stage where I can do the Two Oceans 21 comfortably. I ran the Peninsula Half in 3:08, so I wanted to do the same time at Oceans. I made it home in 3:10, just before the cut-off, and then I went into the Old Mutual VIP area and lay down under a table to recover while the rest of the family tucked into the food! I did manage to emerge in tie to watch Caroline Wöstmann win the ultra, though!”