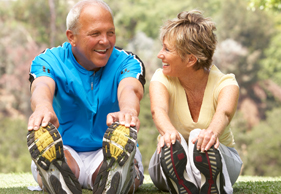 The aging process is accompanied by many physiological changes, especially in sedentary (inactive) individuals. Substantial loss of lean body mass (muscle and bone), reduced immunity, gastric atrophy, decreased sensitivity to taste and smell, and a reduced thirst occur with ageing. Below is a summary of the major physiological changes that occur that may influence nutrient requirements of the aging athlete:

Specific nutrient requirements are difficult to determine because of large differences in the rate of aging between individuals and the many different types of sports undertaken (from playing bowls to taking on Ironman or Comrades). In the absence of definitive values, population nutrient values are used as a benchmark for assessing and planning diets. However these do not necessarily apply to people on medication, which can be up to 25% of older athletes. The Estimated Average Requirement (EAR) is considered the best estimate of nutrient requirement and accommodates for most metabolic and physiological changes that occur during aging.

NUTRIENT AND ENERGY RECOMMENDATIONS
Nutrient recommendations for the aging athlete are very similar to that of the younger athlete, bar a few exceptions.

Fat
Aging people reduce the ability to digest, absorb and utilise fat. However many older athletes report consuming high-fat diets. Relatively low-fat diets are still important, especially in the aging endurance athlete, in order to get more energy derived for carbohydrate and protein. Very low-fat diets are not recommended as they compromise the absorption of fat-soluble vitamins A, D, E and K and may increase hunger between meals.
Recommendation: Similar to that of younger adults, focussing on mono-and polyunsaturated fats.

MICRONUTRIENTS IN OLDER ATHLETES
Irrespective of age, athletes have slightly increased requirements and losses of several vitamins and minerals compared to non-athletes, especially endurance athletes. Older athletes are particularly more at risk because of decreased nutrient absorption, medication interference with nutrient absorption and utilisation, and the presence of chronic disease states. Although dietary surveys show that elderly athletes’ intake of calcium, iron, zinc, magnesium and Vitamin D and E are below RDA levels, they are generally still adequate to avoid deficiency. Usually when energy intakes are met, micronutrient intakes are satisfactory.

Vitamin A
In healthy ageing athletes, vitamin A clearance decreases by about 50% compared to younger athletes, suggesting that the RDA cut-offs for vitamin A for people aged 50 to 70 are in excess of requirements. Athletes often supplement with vitamin A because of its potential role in decreasing oxidative stress, but one must be aware that misuse can lead to vitamin A toxicity.
Recommendation: Increasing vitamin A-rich foods from dietary sources is more appropriate than supplements and avoids any potential unwanted pro-oxidative effects associated with supplementation that can damage cells and tissues. Good sources of vitamin A include egg yolk, animal fats, liver, kidney, yellow/orange/red fruits and green vegetables.

Vitamin B6
As the need for protein increases, so does the need for Vitamin B6, as it is used for amino acid metabolism, and older people need more than younger people. It’s reported that many older people don’t meet adequate amount in their diet.
Recommendation: Because athletes of any age have a higher turnover of vitamin B6, regardless of age, and because older athletes’ serum concentrations of vitamin B6 is often decreased, it is necessary that older athletes consume adequate amounts of vitamin B6 in their diet. Good sources include beans, eggs, liver, whole-grains, oranges, peanuts, wheat germ and fish.

Vitamin C
There is no evidence to show that vitamin C absorption or utilisation is impaired with aging.
Recommendation: Ageing athletes generally meet or exceed recommended intakes. Although slightly higher intakes are needed in smokers, people living in heavily populated areas or people undertaking physical activity, supplementation is not necessary. For prolonged, strenuous exercise, it’s recommended to take 10 to 1000mg per day, which may require supplementation, but note that taking more than 1000mg has been associated with runner’s diarrhoea, gout and kidney stones.

Vitamin D
Adequate amounts are crucial for older athletes, given its importance in maintaining bone integrity and potential decrease in growth seen in aging. Aging reduces the capacity of the skin to synthesise vitamin D precursors and reduces renal production of activated D3.
Recommendation: Older people have high recommendations for vitamin D. Apart from a small amount obtained in fortified cereals, margarines and eggs, most is manufactured in the liver and kidneys by sunlight on the skin. Supplements are only warranted in athletes who have little exposure to sunlight.

Vitamin E
This is another anti-oxidant, like vitamins A and C, that has a potential protective role against free radicals produced by prolonged exercise. However, studies on younger athletes have not supported the view that vitamin E supplements reduce exercise-induced muscle damage.
Recommendation: More studies are needed in the aging athlete, but for now high-dose supplementation of vitamin E is inappropriate. Good dietary sources include wheat germ, soya bean, peanut oils, raw seeds and nuts, margarine, eggs, sweet potato, liver and some green vegetables.

Riboflavin
Older athletes’ riboflavin requirements are the same as younger people, but slightly higher in people over 70 years.
Recommendation: Athletes following low-energy diets or who have a sudden increase in training volume or intensity, or who avoid dairy products, may have higher riboflavin requirements. Good dietary sources include liver, milk, eggs, cheese, fish, yeast extracts and green vegetables.

Calcium
Aging athletes who already have low bone density, and possibly longstanding suboptimal calcium intakes and oestrogen insufficiency, are likely to be at high risk of stress fractures when undertaking repetitive impact activities. Calcium (and vitamin D) absorption decreases with aging, and aging athletes often don’t consume enough calcium to meet their RDA requirements.
Recommendation: The recommended requirements for women over 50 and men over 70 is higher than younger adults (1300mg/d vs. 100mg/d). This increased need compensates for the degenerative bone-loss and reduced absorptive capacity caused by age. Lactose-intolerant people, those who dislike dairy products or are allergic to milk, and athletes with disrupted eating patterns and amenorrhea, may need calcium supplements. 1000-1500mg/d of elemental calcium and 400-800IU/d of vitamin D is recommended as a supplement.

Zinc
Zinc is involved in tissue repair and immune function, which are important to aging athletes who are susceptible to tissue damage.
Recommendation: The aging athlete may be at risk of zinc depletion as they have high sweat-loss, consume high carbohydrate diets with high phytate contents, or routinely take calcium and iron supplements with meals, which inhibit zinc absorption. Good sources include liver, red meat, egg yolk, oysters, dairy produce, vegetables and cereals.

Water
Aging athletes are more susceptible to hypohydration and heat stress due to many reasons, including decreased total body water, reduced thirst sensation and decreased sweat production.
Recommendation: Guidelines for fluid intake are the same for younger athletes before, during and after exercise, but should perhaps be applied more aggressively in aging athletes. Beverages containing 6-8% carbohydrate (sports drinks) are the best choice for exercise longer than one hour.

NOTE ON SUPPLEMENTS
Ageing athletes who are considering a micronutrient supplement should look for a daily multivitamin/mineral supplement that supplies no more than 100% of the RDA. Single nutrient supplementation is not encouraged and should be limited to calcium and vitamins B6, B12, D and E, depending on individual risk for disease and food patterns.