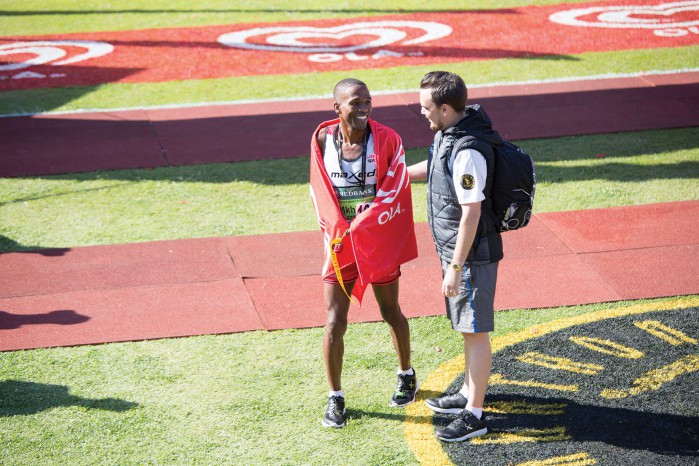 Being born two days before his dad was scheduled to run the 1985 Comrades Marathon was a fitting start for Cuan Walker, who has gone on to make a name for himself in South African running as an athlete, manager and TV commentator. – BY RACHEL PIENAAR

If ever a man was destined to end up on TV as a running commentator, it was Cuan Walker. It started with him growing up in a running household and developing a passion for all things running from a young age, which saw him run his first race when he was in grade three. “I ran the RAC 5km in Johannesburg, and then around the age of 12 I ran my first 10km, which was the 1997 Merewent 10km in Durban. I ran it in a time of 52:10 and winning a gold medal that day made me feel like I had won the Olympics!”

That same year, he took the first step in what was to become a successful commentary career. Former Comrades Marathon Association Chairman Barry Varty knew of the youngster’s immense interest in the Comrades, so he introduced Cuan to former Comrades women’s winner Cheryl Winn, who at the time was media manager for the race. She offered Cuan a seat on the press truck during the race, and he amazed the journalists with his incredible knowledge of the runners – not only could he recognise all the top runners, but he even knew their running records, all from memory! “I think it was then that people started calling me a walking encyclopaedia,” jokes Cuan. “I just found myself in the right place at the right time, and people saw what input I could add.”

OPPORTUNITY KNOCKS
One of those people was the late Zithulele Sinqe, former SA marathon record holder and TV commentator. He helped Cuan get a foot in the door at the SABC, starting with a short 10-minute stint on air for the 2007 Soweto Marathon. Then in February 2008 the SABC asked Cuan to do commentary for the SA Marathon Championships. “I literally spoke the entire broadcast and they were amazed at my knowledge, so they offered me a regular position, which to this day I am still grateful to have. One my best memories on the job happened during the 2011 Comrades Marathon. It was run on my birthday, and during the second half of the race, the other commentators sang Happy Birthday on air and I had a little muffin with a candle in as a birthday cake. That was a really special moment!”

In between regular TV appearances, Cuan still does some running himself, and he cites the 2007 Comrades as one of his best running moments. “I was actually running injured, but my dad was going to watch me run, so I attempted it anyway. It wasn’t my fastest time, and I landed up in ICU two days after the race, but my Dad got to see me finish a Comrades Marathon, and the cherry on top was finishing in 8:57 and hanging on for a Bill Rowan medal.”

Unfortunately, when his dad passed away in November 2008, Cuan lost much of his will to run. Then getting married in 2012 saw his running take even more of a backseat, and it was only late in 2016 that Cuan found himself drawn back into it. “I have only recently gotten back into running properly and still see myself on the comeback! I recently ran the Sani Stagger mountain race off six weeks’ training and managed a 13th overall, so I’m using that to motivate myself to keep on going. Even though I may not get back to my old times, it feels good to be back running.”

EXPANDING HORIZONS
Of course, Cuan needs a day job to pay the bills, and there he has also carved himself a niche in running, working for Mr Price as team manager of the company’s Maxed Elite Running Club’s pro athletes. He says he has to thank former Olympian Gwen Van Lingen for the job. “She literally took me in like a mother and when I was not at school or training, I was in the Mr Price Head Office, assisting her with the team. When she left for the USA, I took over.”

Cuan is optimistic about the sport in SA, saying he foresees more growth in the coming years. “We are in a much better place now than we were three or four years ago. More races are paying bigger money, more events are being televised and running is slowly but surely getting the coverage it deserves.” However, he says his focus remains on telling the stories of the runners and hopefully inspiring others to also take up the running challenge. “That’s the best part of my job. Each person, from the Comrades winner to the sub-12 finisher, has a story to tell and inspiration to draw from, and just seeing their successes and the seasons of life the athletes go through inspires me to try inspire other people.”