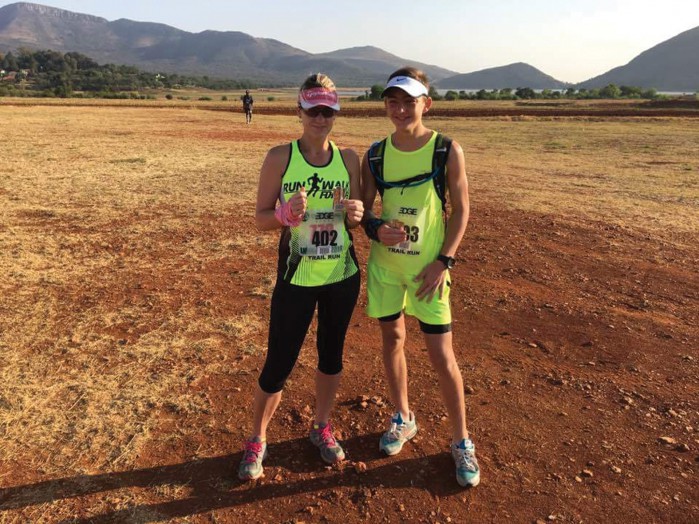 Whether you like running or if the only form of running you do is running your mouth, these life lessons I picked up during my various cross country races may help you too. – BY LIZETTE DU PLESSIS

You may be asking yourself what makes me, an average runner from Rustenburg, qualified to offer life lessons based on my shortish cross country running career. I mean, to be frank, when people look at me, they would never think, “Oh, I bet she is a cross country runner!” I played sports throughout high school, so I was athletic, but I do not fit the average cross country body type. On the contrary, I have ‘home run-swinging’ hips, and my thighs… well, one thigh alone was bigger than most of my teammates’ torsos. Basically, I felt like the Incredible Hulk running next to a bunch of Barbie dolls, but instead of a green complexion like the Hulk, I was normally red in the face.

Nevertheless, I perservered, and today I can look back on some great running memories and achievements, as well as some very important life lessons learned along the way. I would never have imagined that running cross country would have had such an impact on my life, and my life has greatly benefited from the lessons I learned. Maybe a few of my thoughts will help you as well.

1. Don’t let anyone (including yourself) put limits on your abilities.
Since I don’t look like a cross country runner, I never thought that I would be good at it. I like running and I actively ran in order to be in better shape, but never felt like I was particularly good at it. When I decided to run cross country, I did it to stay busy during the winter. So when I began running competitively and was pretty decent at it, I was shocked. Who knew the Hulk could outrun a few Barbies, right?

What shocked me even more was when I found out that women were telling my husband how proud they were of me. Lesson? Try something new, even if think you might fail. Who knows, you might end up being good at it, and better, loving it. Live a little. Test your limits. You will be amazed by your unexpected abilities.

2. Everyone needs a running buddy.
Some days you are just not feeling it. Some days, even running just four kays simply doesn’t seem like fun. These are the days when you need your running buddy to encourage and push you. Sometimes, even in the middle of a run, your motivation can plummet, and you need a good running buddy to drag you along in order for you to not give up entirely.

Life is like that too. Some days you’re just not up to it, and good people surrounding you will motivate you to keep going, even when you want to give up. Life can be hard, but it gets easier if you have a ‘running buddy.’ So be that kind of buddy for someone else, and when you need it they will be there for you as well.

3. Mental toughness is important.
Everyone knows that in sports, mental toughness is important in order to be successful, and in cross country it is no different. Surprisingly enough, in cross country it’s not always the fastest person that crosses the finish line first, but the one who can endure the most pain for the longest amount of time. Sometimes in life you might have to do a similar thing in order to succeed. You have to keep pushing even when it gets hard and you want to give up. Learning to be mentally tough, not just in sports but in your everyday life, will completely change you. You will be able to accomplish so much more and your ability to handle setbacks and disappointments without giving up will increase dramatically.

4. Don’t let the fear of pain stop you.
Life and running are going to hurt. Sometimes, they are going to hurt a lot! Now no-one likes to be in pain, but it is necessary to live through it. If we shrink away from the pain, we may miss out on some of the richest experiences in our lives. Pain is momentary, but the experiences that we will miss if we shy away from pain will impact our lives. Don’t miss out on life because you fear the pain associated with it.

5. You need to dig deep and be strong for others, even when you feel weak.
In cross country, you may not be the one that crosses the finish line first, but you can still earn points for your team. When another teammate falls behind, it is your job to push yourself and make up the difference. You are not always going to feel strong in the run of life, but even at your weakest point it may be important that you remain strong for those around you.

6. Kindness is important, even during competition.
Cross country is an interesting sport because while it is still a competition, everyone is pushing through the pain together, and thus they have sympathy for each other. In my first race, when I wanted to give up, I was completely taken off guard when a runner from another team started to encourage me. After marvelling about this quite a bit, I came to the conclusion, “Why not?”

The people around us in the run of life need encouragement too. It doesn’t make you any less competitive. If they do better from your encouragement, it just pushes you to be better as well. What would happen if we encouraged and showed genuine kindness, even to those who may seem to be competing with us? I am sure we would all win.

7. It is important to show strength and heart on the uphill.
It’s obvious that running uphill is hard. It takes strength, endurance, mental toughness and heart. Running cross country, I was once given a bit of advice about taking on a rival: “Beat her on the uphill.” Running, as mentioned earlier, is a mental sport. If you pass someone while you are running up a hill, you defeat them mentally. In their minds they think, “If she can pass me on the uphill, I have no chance of catching her.”

Some of your hardest battles will be like going uphill, but if you can overcome those challenges, you will feel unstoppable. Everything else in life will seem easier, so dig deep and stick it out during those uphill battles.

8. You’ve done it before, you can do it again.
Sometimes during a cross country race you feel like you can’t do it, despite the fact that every day you run that same distance, or more. Don’t let your mind defeat you. Remember how many hard times and steep hills you’ve run so far, and keep going. You are stronger than you know.

To sum it all up, my advice to you is just run. In the beginning it may be hard to understand that the whole idea is not only to beat the other runners, but eventually you learn that the competition is more against the little voice inside you that wants to quit. Go out there and silence that voice.