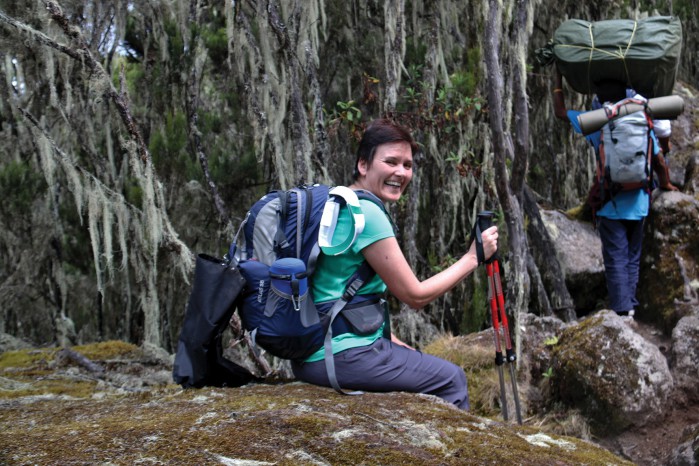 While attending the 2016 Comrades Marathon, Old Mutual’s Head of Brand of Emerging Markets, Karen Thomas, was invited on a journey that would test her and humble her, and just like the 90km journey from Maritzburg to Durban, it would change her. Here’s her story of conquering Mount Kilimanjaro. – BY ROXANNE MARTIN

Karen has a busy life. She works from early morning to late evening and travels at least once a week for business, some of which is centred on Old Mutual’s title sponsorship of several of the biggest events on the SA running calendar, while balancing the task of being a loving wife to husband Glen and mother to daughter Andrea. So when she was challenged to climb Mount Kilimanjaro towards the end of 2016, just four months later, many would have forgiven her for saying her schedule was just too full, but Karen’s commitment to a managed lifestyle, of balancing it all, allowed her to find the time to train and get herself ready to climb the highest peak in Africa.

Boot Camp Diaries
Following a strict routine of attending Adventure Boot Camp for Women three days a week, Karen‘s training encompassed an all-body regime that builds core, legs, cardio and overall strength, as well as some running, as she knew she had to up the ante to get ready for the climb on a tight four-month timeline. “I believe that the Adventure Boot Camp built all the strength I needed to do the climb,” says Karen, adding that she spent every available opportunity to climb Table Mountain. “What was so awesome was discovering parts of Table Mountain that I didn’t know. That was absolutely brilliant. Also, you meet incredible people up there, and I am a bit of a chatterbox, so I would chat to people and get to know them.”

Karen says the biggest lesson she learnt on her various climbs on the mountain was simple: “What goes up, must come down!” That’s why in all her climbs, Karen never took the easy way down with the cable car, instead going down as she had gone up, on her own two feet. “What people don’t realise is the coming down is harder, so you need to make sure you build the strength to get down, too, if you want to take on the high mountains.”

The Importance of Altitude
In the final stages of her preparation, Karen spent a weekend in the Drakensberg while attending the Wild Series Mont-Aux-Sources Challenge, another event sponsored by Old Mutual, where she spent three days climbing. “It gave me some altitude training, which I needed with only three weeks to go,” says Karen. At that point she says she felt ready for the challenge ahead, not just physically, but also mentally: “One of the biggest lessons was preparation and training, because you need to make sure you are physically strong and fit, which means then you only have the ‘kop stuff’ to worry about,” explains Karen.

This ‘kop stuff’ she speaks of was the mental strength to push beyond her perceived boundaries and get the job done. “There was no ways that I wasn’t going to make it,” says Karen determinedly, but she is quick to add that she also made sure she gave herself the best opportunity to successfully crest the mountain. “I can’t stress enough the importance of having the right equipment and using it in your training before you attempt the main climb. You need to have good, waterproof boots!”

Things Get Real
During the climb the team found themselves faced with a day of constant rain and below zero temperatures. “It rained so hard that day, then it starting sleeting because it was so cold,” says Karen. Incredibly thankful for her waterproof boots and dry feet, it was still a tough, taxing day, pushing the whole party further than they thought the journey would. It was here that Karen says the support she had received all through her journey to the climb really madea difference. “I just drew on the strength of all the supporters that were backing me to finish this journey. In the toughest moments, it was simply the thought of those back home who were cheering me on that kept me going.”

The effects of altitude also proved a problem for many in the climbing party, with some of Karen’s fellow climbers needing oxygen as they bean hallucinating, but Karen seemed to take everything in her stride. “I think I have the constitution for altitude. I did the Inca Trail about six years ago, and was fine then – I didn’t have headaches or any symptoms,” says Karen. Her tent mate was not so lucky, getting sick after the party had summitted and being placed on a drip. Luckily she had Karen to help her pack her stuff and make sure she had everything she needed.

Know Your Limits
The experience of watching her fellow climbers succumb to the many challenges that the mountain puts in front of you, gave Karen an insight into what her family feared most, that she would push past the point where she should stop. “You have to know when you can’t do it, when you must stop,” says Karen, explaining again how important it is to listen to those around you to know when you need to stop. But overcoming the altitude was actually not Karen’s biggest problem during the climb… “I am quite tall, and your gear is heavy, so I would need someone to help me get out of the tent everyday!” jokes Karen.

Also, the ablutions facilities on route were a serious challenge, but luckily for the girls they had a portable mini-loo with them. Washing and staying fresh was also a challenge, says Karen. “We took plenty of wet-wipes, and it didn’t matter how cold it was, I used them. I also took a little bottle of lavender oil that I could spray on, and people remarked how nice I smelt, which made me feel better,” she laughs.

Summiting
“The Summit was the toughest,” says Karen. “We began the final climb to the top at night, which I believe they do so you can’t see how tough it is! The last 200m to Stella point was really hard, and I think if people could have seen how hectic it was, they wouldn’t do it. I remember looking up and asking someone if that was a star or a head lamp, because you go so high,” says Karen. Getting up to the summit and back down to their final campsight took them a full 16 hours, but Karen says it was all made worthwhile when you got to the top with the sun rising and saw the whole world in front of you. “it was just amazing,” she says.

Asked if she would do it again, Karen’s answer is an emphatic no. “There are other challenges out there that are left for me to take on and experience.” She adds that climbing Kili has given her a new perspective on the bigger picture, and shown her that there is more to life than just what you do every day, that amazing experiences and amazing friendships are what takes one forward… to the next big challenge.