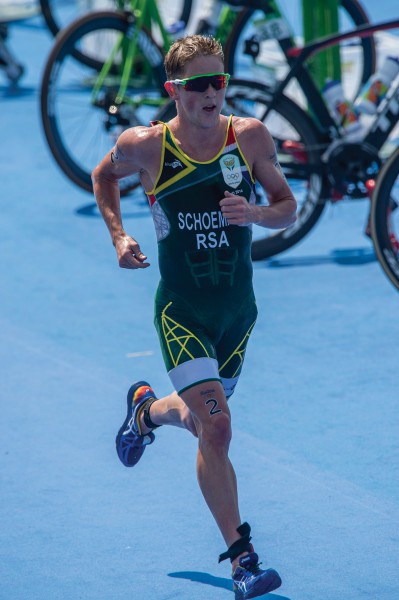 Having won an Olympic bronze medal in Rio, Henri Schoeman has the triathlon world at his feet, and he says he is hungry for more success in the sport he has made his focus since he was 16 years old. – BY KYLE DEELEY

The 2014 Commonwealth Games triathlon event in Glasgow, Scotland, left Durban-based SA pro triathlete Henri Schoeman with mixed feelings… It was his first major Games, having turned pro the year before, and he was in good form, which saw him up with the leaders on the bike leg in the individual race. “I think it might have been a little too early for a great performance. However, I set myself up for possible medal contention by being in a breakaway with the Brownlee brothers of England and another Scottish athlete, but then I crashed very early in the bike leg and fell back to the large chase group, and I finished in a disappointing 16th place,” says Henri.

Having watched his SA teammate Richard Murray finish third to claim the bronze medal, Henri was back in action a few days later in the mixed team event alongside Richard, Gillian Sanders and Katie Roberts, and this time things went exactly to plan. “The team race was extremely exciting! It was a great opportunity to be part of a team and on the day the South African team executed the perfect race. We had the best team spirit out there and that contributed a lot to our silver medal finish. Winning that Commonwealth medal is something I will always remember and cherish.”

BIGGER AND BETTER
Fast forward two years and Henri went to the Rio Olympics on the back of a solid couple of years on the ITU world circuit, including a prestigious win in the World Triathlon Series Grand Finale in Cozumel, Mexico, shortly before the Olympics. “Being the first South African and only the fourth man to ever win a WTS Grand Final is something I am extremely proud of,” says Henri. However, he arrived in Rio with a suspected respiratory illness: “I had a fever the whole week before the race, and the doctor only gave me the all-clear to be on the start line a few days before the race.” Fortunately, race day saw the young South African enjoy an incredible race, and despite a tough bike leg, he was able to push harder than ever on the run to come home third and claim the Olympic bronze medal (with Richard using his running strength to recover from a slow start to finish fourth). It was SA’s first ever medal in Olympic triathlon.

Unsurprisingly, Henri says his Rio medal-winning performance really put him on the map and triggered big changes in terms of his profile, invites, and endorsements. “The bronze medal in Rio is the highlight of my career thus far, a dream come true. It felt great but was also a very humbling experience standing on the podium, proud of my achievement and realising that all the sacrifice and hard work had finally paid off. Since then life has become extremely busy, with many requests for interviews, appearances and talks. I have become more recognised in South Africa as well as on the triathlon circuit, and so far sponsorships and endorsements have increased quite a bit coming into 2017, which is always a good thing!”

He adds that Rio has proven to be a life-changing experience, much more so than Glasgow. “It’s two completely different cultures, although similar from a Games layout and protocol perspective. The Olympic experience is very special and unique, and to be there and represent my country was a very proud achievement. Also, the atmosphere of staying with Team South Africa was cool and the medical team went above and beyond to make sure everyone was attended to and fit and healthy to perform at their best.”

DESTINED FOR STARDOM
Born in Vereeniging in 1991 but having lived in Durban since high school age, Henri participated in various sports at school, including cross-country, surf-lifesaving, swimming, karate, duathlon and triathlon, but swimming was his main focus. “My dad was always a sports person, so I grew up in a sporting environment and had love for sport from an early age,” explains Henri. He excelled in swimming, as did his brother Riaan (who won a bronze medal at the 2010 Commonwealth Games in Delhi, India), but at age 16 he decided to spread his wings in the world of triathlon, and success came early as he won the SA Under-19 title in consecutive years. “During 2007 I began doing really well in triathlon events. It was then that I felt this was the path that would take me further than swimming and enable me to reach my dream of becoming an Olympian,” says Henri.

However, in 2009 he suffered stress fractures in his shins, followed by a motorbike accident in 2011, which kept him out of competition for much of those years. Fortunately he used those years to build his leg strength, and by 2013 he was ready to take the world on. He turned pro when he got his first start in an ITU World Series event, but again it wasn’t smooth sailing. “I had a disappointing result in my first race in San Diego and it was a tough pill to swallow,” says Henri. Also, his parents had taken out a loan to get him there, so he felt added pressure to do well. His next event was in Yokohama, Japan, and this time he had a much better result. “Japan went a lot better than San Diego and I crossed the line in sixth place. That’s when I knew I had what it takes to succeed, and I followed that up with a fourth-place finish in Austria.

Since then Henri has collected numerous podium and top positions on the circuit, and he loves being a pro triathlete, but he adds that it is not an easy life. “It may seem glamorous and exciting, but with success also comes struggle. Travelling the world and visiting exciting locations is one of the great things of this job, but travelling is often not a smooth experience, and along with travelling comes stress and fatigue. Also, being in a different country eight or nine times a year isn’t easy, especially when travel expenses are coming out of your own pocket! When I was the new guy on the circuit, my financial sponsors were few and far between, and I relied solely on prize money to get me to the next race. But the most important thing was that I was doing what I love, and that is still the case today.”

MAGICAL MEMORIES
When asked to look back on the highlights of his career thus far, Henri starts all the way back with that second race in Yokohama in 2013. “That race had the potential to make or break me as a triathlete on the World Circuit. Then, the 2013 Kitzbuehel WTS is another one I will never forget. I loved the unique toughness of climbing up the Kitzbueler Horn during the bike leg and then running further up the mountain to the finish. I like challenging courses and that is still known as the hardest triathlon in the world,” he says. “The 2014 race in Tongyeong was my first World Cup win, after a very tough year filled with injuries and disappointment, and it gave me great confidence in myself and my abilities. And the Hamburg WTS race is one of my favourites. The race draws thousands of spectators and the vibe and atmosphere make the race really fast and exciting.

Outside of triathlon, Henri says he still wants to finish his marketing studies, which he put on hold while working towards getting to Rio. “I postponed finishing my studies to focus on training, but I do plan on finishing my studies this year. I am also very passionate about wildlife and I want to help create a movement in wildlife conservation to end the poaching in South Africa. I want to create awareness around our invaluable wildlife.” But for now his focus will remain on triathlon, and he says he wants to achieve more success. “I’m still hungry for more! I want to continue with the World Series and perform well there, and I would like to improve my running to be able to compete with the best in the world. I have my sights set on the Commonwealth Games in 2018 and the Olympics in 2020,” says Henri. As they say, watch this space…