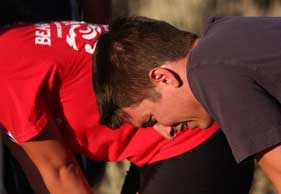 Not many of us take the time to commit to New Year’s resolutions, except of course when it comes to running. Come the New Year and we find a renewed motivation to ensure that this is our year. We’re a little more determined to run that PB or we aim for higher weekly mileage and a longer, bigger build-up. But is this the best approach? We need to ask ourselves: “What should I be doing in January?”, “How much should I be doing?” and “When and how do I go about increasing my mileage?”

These questions are all dependent on what your main goal or race for 2017 is, and regardless of what that goal is, I hope that your holiday period consisted of more than over-indulgence and that you managed to at least get a few days of training in per week.

When it comes to Comrades, most of us start increasing our mileage far too early and by the time race day rolls around we’re tired, sick, injured or somewhere in between. If Comrades is your goal, then you should be looking to qualify around mid-February to early March. You would need the minimum amount of mileage in order to qualify in the slowest time possible within your batch. For example, if you’re looking for a C-qualification then you need to run between a 3:20 and 3:40 marathon. You should be aiming for as close to 3:40 as you can so that you leave plenty in the tank for Comrades.

Apart from a few long runs to ensure you can comfortably complete your qualifier, your focus should be on getting faster. This will enable you to cover more distance in the same amount of time when you start your Comrades build-up in mid-March.

Two Oceans is a slightly different matter. If your goal race is the Two Oceans Ultra, then you have 12 weeks of training before the start of a three-week taper. This still leaves you with enough time if you have trained through December. If you did nothing in December, however, then you’re pretty much going to have to settle for aiming for a finish, as you really only have time to get your base back in place and a small amount of speed work in the last few weeks.

Assuming you’ve trained through December, then January is the time to gradually start increasing your longer runs with the aim of running an easy qualifier in the first two weeks of March. Your peak training period for Two Oceans starts mid-Feb and ends at the end of March.

Of course, you may have other goals, such as a 21km PB or a trail run. As a general rule, you want to build up to 85% of the race distance three weeks before the event. In the case of a 21km, that would mean an 18km long run three weeks before. When building your weekly mileage, increase by no more than 10-15% each week, with a recovery in week three or four. For example, you might have the following long run structure over a four-week period in preparation for Two Oceans Ultra.

Be careful not to get caught up with doing too much mileage too early on. Our bodies and minds can really only sustain long hard weeks for around six weeks before we start paying the price. January is the ideal time to get motivated because 2017 brings about a clean sheet with new possibilities.