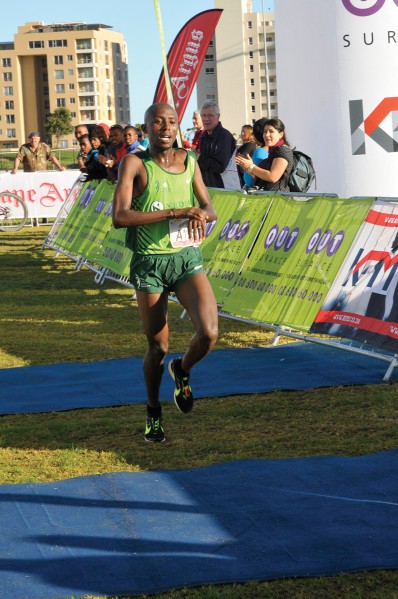 Having shown his running prowess on both road and off-road, David Manja has the running world at his feet and is looking to do great things in the years to come as he forges a career as an athlete. – BY KYLE DEELEY.

It’s been quite some year for David Manja, the 25-year-old long distance speedster from the North West Province. Amongst his 2016 titles are the SA Cross Country senior men’s 10km title as well as solid wins in the OUTsurance KFM 94.5 Gun Run Half Marathon in Cape Town and the Old Mutual Soweto Half Marathon in Johannesburg, showing just how versatile he is, as well as his ability to perform at both sea level and altitude. And having represented his country a number of times already, he says he is looking forward to more as he pursues running as a career.

David started his primary school career at Upper Setlagole Primary School before moving to Onkabetse Thuto Secondary School until grade 10. “I do not have a Matric certificate, as I dropped out in grade 10. Now running is my life and it is what I do for a living – running is my only source of income,” explains David, adding, “I am married to a beautiful lady who I am humbled to call my wife, and we are blessed with a beautiful son who is now six years old.”

Talent Spotted
It was while he was still in school that David’s ability to compete at a higher running level became apparent, when he took part in the 2010 North West Province schools track and field championships. “I ran in the under-19 5000m race where I placed second behind my current running partner, Joel Mmone,” says David. “I saw the potential I had, so when Joel came to shake my hand after the race, I decided to approach his coach, Pio Mpolokeng, to ask for help.” David duly joined Pio’s training group and says he is still grateful for the opportunity he was given to take his running still higher.

The success soon followed, with his breakout performance being at the 2012 South African Cross Country Trials, which he says is still his favourite memory of his career thus far. “This was my first time running with the top athletes from South Africa, competing against Elroy Gelant, Stephen Mokoka, Lungisa Mdedelwa and Boy Soke. I managed to beat them all and finished in a very comfortable second position.” That prompted a first national call-up to run for South Africa, which David feels is his greatest achievement thus far.

Give me the Tar
Even though much of his success has come on the cross country circuit, David says he prefers road running, because he feels he can win good money on the tar with which to support his family. He currently runs in the colours of Nedbank Running Club and is sponsored by Nike South Africa, Biogen and FutureLife, and says he is looking to make his sponsors proud in the future. Speaking of which, he has a number of goals for the coming year or two, ranging from track to road to the marathon.

“I want to win the 2017 Old Mutual Two Oceans Half Marathon, because winning that is any athlete’s dream, and later in the year I want to run another marathon and improve on my 2:28:07 at the 2014 Cape Town Marathon, but my focus next year is the World Champs. If I can run a 27-minute race in the 10,000m race and qualify for the World Champs, then I won’t compete in the marathon distance. My long-term goal is to compete at the Olympic Games,” says David. “Athletics is my main source of income, and I need to train hard and succeed in everything I do. It is my family that motivates me and as long as they are happy, I am happy.”