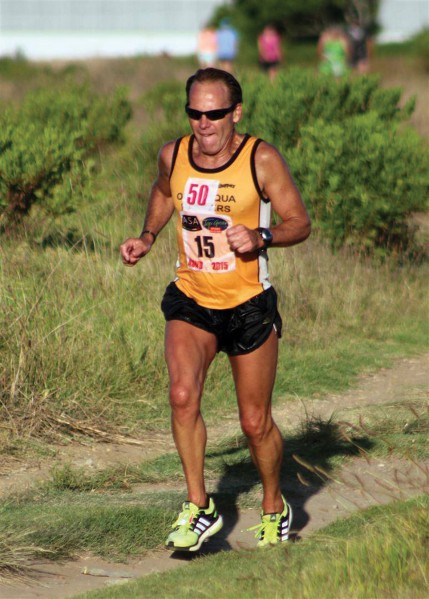 In a running career spanning 30 years, 51-year-old Peter Jaehne can look back on eight silver medals in the Comrades Marathon, six silvers in the Old Mutual Two Oceans Marathon, and a marathon personal best of 2:42:27, but even more impressive is his streak of 799 consecutive sub-90-minute half marathon finishes… and counting! Here is his story.

Running is an adventure that has produced beautiful lessons, truths involving friendships and an incredible amount of dedication and courage. Although I also run marathons and ultra-marathons, the one distance that I have come to love is the half marathon, simply because I can cover the right amount of ground to feel a sense of challenge and accomplishment. It also does not require the same relentless level of physical and mental training as marathons and ultra-marathons.

My journey with the half marathon began in 1986. I was about 12kg heavier and hadn’t done any training as I was roped into the race by a friend who was a trained athlete. So, there I was, literally going from zero training to 21km in a single day, and it was an absolutely awful experience for me! I just remember chaffing everywhere… under my arms, between my legs, practically everywhere it is humanly possible to chafe! I thought I would never actually go back to running, but there was something within me, perhaps a strong sense of determination that somehow prompted me to continue on the path of running.

It was probably around my fifth or sixth half marathon that I managed to run my first sub-90, and from that day on I set out to achieve that target in all my races. Notwithstanding having completed five consecutive silver medals in the 56km Two Oceans Ultra, and eight silver medals at Comrades, the satisfaction and pure delight from being able to run sub-90 minutes is the most rewarding aspect for me. It puts me on an unbelievable high! Not even six consecutive sub-3:00 marathons in the Masters category in 2015 comes close to my joy in achieving those sub-90s. And over the last 30 years, 24 with RAC and the last six years with Outeniqua Harriers, this goal has inspired me to push myself beyond my perceived limits, often in spite of things I had to face in life, as I found out in 2011…

WAKE-UP CALL
I had been living in Johannesburg, figuratively burning the candle at both ends with regards to my job, my family and my sport. I would typically get around five hours of sleep after a really tough day at work and then wake up at 4am to run and start my next day. Then I was diagnosed with advanced cancer, and this was a huge wake-up call for me. I quit my job and moved the family down to George.

While undergoing treatment between November 2011 and March 2012, I decided that I wanted to run the 2012 Comrades Marathon with my friends – to do it one last time and get my Green Number. Even though I was battling cancer, I had never lost my will to live or my desire and my passion for running. In fact, I think having cancer at the time and going through the whole experience enhanced the purpose, and the luxury, of being able to do something like a run. So I kept my running going, I never slowed it down.

After my treatment ended, I didn’t run any marathons for a while, but I did train for Comrades by doing 25 days of consecutive running in which I ran slow 25km runs to prepare myself physically and mentally. Just being able to run that Comrades was an incredible experience, and to my surprise, I finished it in a time of 7:15:29, my second-fastest run, and obtained an eighth silver medal. To me, this was a clear case of mind over matter, good over bad, and courage over fear.

PUSHING THE LIMITS
Fortunately, I have not had any bad race experiences over the years, but there have been quite a number of tough races! I remember running, a marathon about 10, maybe 12 years ago, with some friends from Johannesburg who said they wanted to try and run it under three hours. During the race I experienced a lot of discomfort, but I pressed on and still managed to cross the finish line in a time of 2:59:59… and then I passed out and needed to be airlifted to hospital! For about 10 hours following the race I was completely paralysed – I couldn’t move a toe or finger – but looking back on the race I am extremely proud of finishing in the time that my friends and I had set, even though it was by the skin of my teeth.

When I was younger, I would often test my limits, so while living in Johannesburg, I loved to run a sub-90 half marathon in Pretoria on Saturday and then another sub-90 on Sunday in Johannesburg. It taught me to push on through the tiredness and keep my eyes on the goal. All in all, I have very seldom had ‘easy’ races, because I just put my head down and work on achieving what I set out to achieve.

These days I compete in the 50 to 59 Masters age category, sometimes obtaining a podium place, and some highlights of this year include running a 1:28 at the Germiston Half Marathon in September, then a 2:54 in the Cape Town Marathon a week later, followed by a 1:24 at the Petro SA 21km in Mossel Bay and a 1:24 in Laingsburg. Then on 15 October I ran one of my career highlights at the Meiringspoort Half Marathon. I was running against the SA National Defence Force running club champion in our age group, and on the last uphill I managed to pass him, finishing first master and 24th overall in 1:20.

800 AND COUNTING…
It was never my goal to run 799 consecutive sub-90 half marathons. In fact, I only discovered my streak about 18 months ago while going through all my medals and certificates, but since then I have found that running sub-90s has given me something to work towards, and a sense of both determination and achievement, reminding me that I can do anything I set my mind to. By the time you read this I should have run my 800th sub-90, and I can tell you that I cannot wait to line up for that race, excitedly bouncing on my toes at the start, passing the first 500m with sweaty hands and burning lungs, and finally crossing the finish line with a huge feeling of accomplishment.

And once I have my 800th sub-90 in the bag, I want to round off this incredible journey by hosting a party, where I will open every single envelope of race prize money that I’ve collected, because I have never opened any envelopes over all these years. With a glass of beer or wine in one hand, I will toast to the success of the past as well as the gift of the future… which will include me setting out to get to 1000 consecutive sub-90s in the next six or seven years, and many more sub-three-hour marathons!