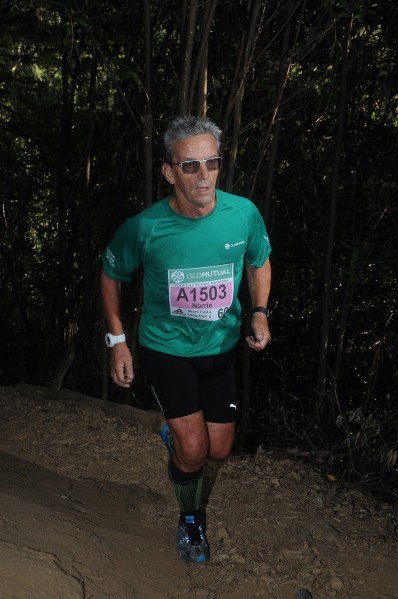 He has 20 Comrades medals and represented Great Britain, Scotland and South Africa in running and triathlon, he travels the world regularly to coach or measure courses (including three Olympic Marathons), does media work for print, radio and television, has written books on running, is one of the most respected athletics people in SA, and did his first bungee and parachute jumps at age 59. It is impossible to tell you the entire Norrie Williamson story in the space available here, but we’ll give it a try anyway… – BY SEAN FALCONER

Stop by the Old Mutual stand at one of the big race Expo’s and chances are good you’ll see 61-year-old Norrie Williamson manning the Virtual Coach desk, dishing out pacing charts and chatting up a storm in his still distinct Scottish accent. Norrie has helped many a runner earn a coveted medal, and his expert knowledge sees him flying all over the world to measure event routes or share his vast coaching knowledge. In fact, he is away from home more than he is home. “This year I have been in Zambia twice, India three times, Dubai six times, and of course Rio, amongst other places. I think I’ve only been at home in Durban a total of 70 days all year, usually only two to three nights at a time,” says Norrie. “I could earn a lot more using my training as an engineer, but I get far more reward flying around the world for athletics.”

FROM RUGBY TO RUNNING
Norrie can look back on an illustrious running career, filled with race wins and international accolades, but it is hard to think that he actually began his sporting life in school as a front row forward in rugby back in Scotland. “I was the slowest, heaviest guy in my class, hence I played hooker, and I wasn’t really that talented, but I did a lot of analysis of the game and preparation. That saw me eventually play premier league rugby and turn out for my provincial and district teams at senior level, and I was even on the bench against the All Blacks in 1980. Then I headed out to South Africa in February 1981 to work in Durban, and on the flight I read an article in the British Jogger magazine about the Two Oceans and Comrades, and that made me change to running. Back then the forwards were binding much lower in Scotland and we actually hooked the ball with our heads. I got into running instead, because I would have broken my neck playing here!”

That saw Norrie run his first marathon in March 1981 at the Savages Marathon, then he finished 11th in the Arthur Newton 56km between Pietermaritzburg and Hillcrest, and followed that with a 7:09 Comrades debut. The following year he ran his first 100-miler as well as the first of his 10 Two Oceans ultras, all of which produced sub-4:00 silver medals. In 1983, Norrie won the Star Mazda Johannesburg to Durban 1000km race. “We started in Joburg, ran out and back in various directions for five days, and then ran down to Durban. I won it, and Kenny Craig and Dave Park were the only two others who made it to the end!” Another notable achievement in 1983 saw Norrie run a 2:42 in the London Marathon and then post a 2:45 the very next day in the Boston Marathon. “I had to finish London in sub-three to make my flight to New York to get to Boston!”

TRI-ING TIMES
Around that same time triathlon was becoming popular in South Africa, and Norrie finished 11th in the Durban Ultra. “I did the marathon in just over three hours, but if that 5km swim had been 5.1km, I think I would have drowned! I was so cold that I got onto my bike in my tracksuit, after taking more than 20 minutes to change! The next year went much better and I finished second, and that got me to Kona for the Ironman, where I finished in about 10:40, which was good enough for seventh place in my 30 to 34 age category. We also had the Leppan Ironman canoe tri here in SA, and I finished 13th in 1983, then top five in 1984, and that helped secure our team sponsorship for the London-Paris Triathlon.”

So Norrie joined Mike Hogg, Dave McCarney and Philip Kuhn in the UK for the ultra tri relay event, with Bruce Fordyce and Tim Noakes as support crew, and as the strongest runner in the team he did the largest share of the run from London to the coast. “On the other hand, I did the least amount of swimming in the Channel, just 15 minutes at a time, because I was seasick! We won the event, on the Champs-Élysées in Paris, and it was all over the newspapers, which led to us starting the SA Triathlon Federation when we got back home.”

In 1985 Norrie became an accredited IAAF course measurer, went to the USA to try make the top five at the Western States 100 Miler (an allergic reaction to a bee sting put paid to that), and ran a 2:35 marathon PB in Edinburgh. In 1986 he started writing columns for the newspapers and doing TV work, set a 24-hour and 100km World Record for running on a treadmill, completed his third Dusi Canoe Marathon, and was part of founding the International Association of Ultra-runners (IAU). In 1989 he was supposed to run across South Africa, but the project fell through, so instead he finished 26th in the Comrades with a time of 6:07:59 – well, 27th, to be exact, because that was the year that Frith van der Merwe finished 15th overall.


In 1992 Norrie finished sixth in the 250km Spartathlon in Greece, which saw him selected to run for Britain in the European 24-hour Champs and World 100km Champs, and for Scotland in the Commonwealth 100km, all while he was heavily involved in the unification of sporting codes back in South Africa as the country finally abandoned its Apartheid policies, and he played a leading role in the founding of Athletics South Africa (ASA) in 1994. “That went on into 1995, when I was offered a three-year contract doing athletics development work in Scotland, but as soon I got ‘home’ I realised it was a mistake, as South Africa had become home. But those three years taught me to see things from a different angle.”

“I’ve been back in South Africa since 1998, and I have no regrets about coming here. I would never have achieved what I have if I had stayed in the UK. In fact, I probably would only have left Scotland for an annual holiday. Instead, I have had an amazing life, have travelled widely, and been incredibly lucky in having such a supportive wife in Karen. Although we are now divorced, we’re still incredibly good friends. I think my Scottish beliefs of 25 years, then 35 years in SA, have shaped me into something different. I am very outspoken, and that sometimes makes me very unpopular, but I believe that my passion for the sport is what is important.”