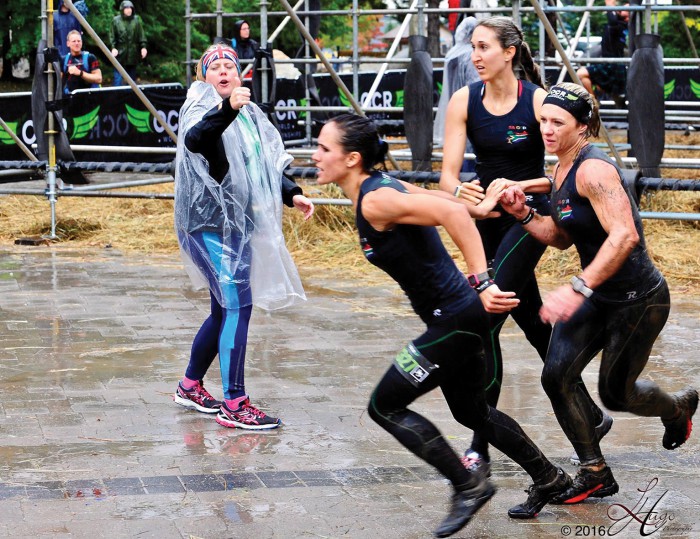 In October I was privileged to be part of the South African team for the trip to Blue Mountain in Canada for the 2016 Obstacle Course Racing (OCR) World Champs. What a surreal experience: Not only did the South Africans once again clean up on the medal front, but I had a great couple of races, and such a ‘jol’ with the SA squad. – BY SABRINA DAOLIO

Soon as we arrived in Canada, I fell in love with the country. No fences, clean streets, mountains, colourful trees, squirrels, maple syrup and pumpkin pie… what’s not to love! The country is beyond beautiful, and being able to run in the mountains, soaking up nature, was indescribable. Added to that, we were apparently really lucky with the weather: The locals said that this time of year the temperature can go five degrees below, so 10 degrees Celsius was like a heat wave for them!

However, the best part was definitely the World Champs. I was very under-prepared, because on 10 September I got a bad foot injury during a race and had not been able to run for the majority of the time leading up to Worlds, but things worked out incredibly well for me! My first race was the individual women’s 20-24 age category event, and with only racing at 1pm, it gave me time to support my fellow SA athletes… and get nervous! After the 100th pee and watching everyone finish their race panting, drenched in sweat, but smiling with relief to have finished, I knew it was going to be tough, but I could not wait to get to that start line.

Gunning for the Podium
The start of the race led us up a gradual slope and I was able to keep up with the leading ladies. After the hurdles and only 600m into the race we hit our first serious climb up to the quarter pipe and six-foot wall. So serious that I had to walk a third of the way up in order to let my heart return to a semi-normal rate! I was in fifth place next to SA teammate Michelle Meyer, but after the inverted wall (obstacle #8) came a technical descent of the ski slope and I was able to move into third place.

At the bottom of the ski slope was ‘Toughest’s Dragons Back’ (#14), then it was back up the mountain to the pass through walls before heading back down towards the platinum rig (#17)… and then back up the ski slope, for what felt like the 50th time, but this time we had to carry a wreck bag halfway up, over the steps and back down. I have never had butt cheek cramps like I had there!

With no time to let the cramps subside, it was back up the mountain, and I moved between second and third spot as we each took a few steps to walk. Towards the top of the ski slope we had a barbed wire crawl and net crawl up to the top, leaving us with breathtaking views… literally huffing and puffing! Skull Valley (#27) and a second platinum rig were the start of the harder obstacles. With a gradual climb we had the warped wall, another quarter pipe and then the Ninja warrior style Stairway to Heaven. I loved this obstacle, where you had to climb up the stairway with only your hands, cross over to the other side, and come back down.

Making our way back down the mountain, we did the hoist and traverse walls (#39) before turning back up to the rope climb, where second place had just rung her bell as I got there and first was out of site. Then I heard the encouraging spectators and marshals say, “Good Job! It’s downhill from here and then you are done!” Oh the relief! Putting pedal to the metal, I motored my way down through the zig-zag forest trail and over the technical bike ramps and bridges, heading for the last few grip obstacles.

Sweeping through the Urban sky rig and over the finishing wall ramp (#47), I was blessed to cross the finish line third in the world in my age category in 2 hours 20 minutes, three minutes behind second and four minutes in front of Michelle. (Well done, Tjom!) I had done 15km with about 1000m of elevation gain, on cramping legs, but I had the biggest smile on my face. My time would have put me in 14th place in the pro female elite category, which is the perfect benchmark for next year!

With the Help of Friends
For the team event the next day, I was in the SA female pro team with Hanneké Dannhauser and Carina Marx. The team race is divided into speed, strength, technical and teamwork legs, and with the rain and mud, this race reached a whole new league of tough and fun! With Hanneke having trained speed for her 3km race, where she finished third in the pro division, and having had a day’s break, she took on the speed segment, which included looping up the mountain and back down with obstacles. Being as strong as she is, Carina took on the strength leg, which included the dreaded wreck bag carry up and down the ski slope, while I took on the technical section, which involved a shorter 2km piece with many grip obstacles.

Hanneke set us off at a fast pace. This section was extremely slippery and included obstacles such as dragons back, a wall and pipe shimmy. On the way down to the first exchange, fighting for fourth position, she was running so fast she took a bum ski as she slid her way over the mud. I was up next, to complete a rig which took me a bit longer as I struggled to move from the muddy rope to the moving pipe. This put us in fifth, with a slight gap to fourth.

Carina made good ground and managed to retake fourth on the way up the slope, but with it being so wet and muddy, most of the athletes took a few tumbles, and after our third exchange, it was my turn to do the next few kilometres of obstacles. Fourth place was once again right ahead, with third still in sight as I sprinted to the wall and ran down towards the monkeybars-to-pole shimmy, took a not so graceful fall in the thick mud turning the corner, but managed to finish the Irish table right behind fourth. Next was the rock climbing suspended walls – definitely my cup of tea – where I was able to overtake the fourth team, but slipping off the next obstacle, Hanneke and Carina were encouraging me to make sure of my grip to keep our short lead.

The fourth and final exchange involved all three of us working together to get up a big, slippery, muddy wall, and once over we were able to claim fourth place, just behind the third place podium finishers. All in all, we were happy with the result and I love these team events, as it gives us a chance to compete together for a change. Overall, I am so grateful to have been able to represent SA in the biggest OCR event of the year, and want to thank everyone for all the messages, calls and support – it means more than I can say!