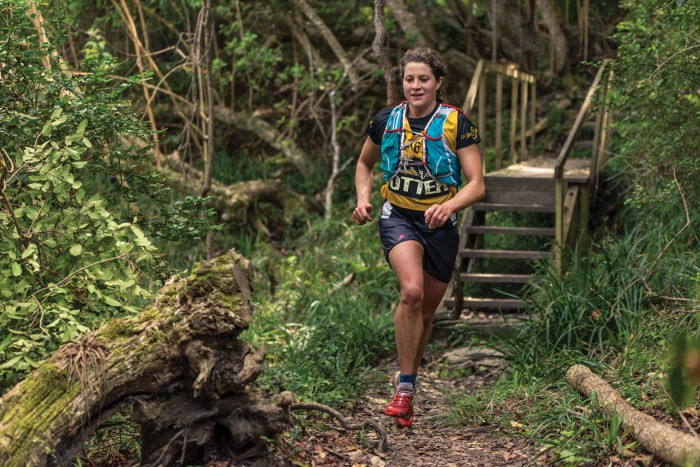 Perhaps known better for her canoeing feats, including five wins in the Unlimited Dusi Canoe Marathon, Robyn Owen (neé Kime) can also claim an impressive record in trail running, having represented South Africa at the 2013 World Trail Champs, and now adding a win in the prestigious Otter Trail Marathon. – BY SEAN FALCONER

The Otter Marathon is known as the Grail of Trail because it is not only a stunningly scenic trail to run, but because for 363 days a year it is strictly off-limits to runners, with only hiking allowed. On those other two days in mid-October, it is reserved for a 42km trail run that brings runners from all over the world to the Southern Cape for the annual run between Storms River and Natures Valley. The race is run in the reverse direction in alternate years, known as the Retto, while the original direction is known as the Classic, and winning it is a real feather in the cap for any trail runner. Which is what makes Robyn Owen’s win in this year’s Retto all the more special, because it was the first trail run she had ever won… and boy did she do it in style!

Robyn ran nearly the entire race neck-and-neck with Stevie Kremer of the USA, but then used her technical running skills to full impact as she streaked clear in the last three rocky kays to win the race and set a massive new women’s course record for either direction. She clocked in at 4 hours 49 minutes 45 seconds, whereas the previous Retto record was 5:11:46, run by Landie Greyling in 2014, while the Classic record stands at 2013’s 4:55:48, by Ruby Muir of New Zealand.

Duel To The End

“It’s definitely my biggest win. In fact, I don’t think I have ever won a trail race before, and I’ve never beaten any of the serious, professional runners before, so this win means a lot to me,” says Robyn. “The first three kilometres were flat and chilled, but then we got onto the technical trail and Stevie really went for it. I just tried to stick with her, but I was battling to keep up with her on the ups, so I had to go hard on the downs, which meant we were constantly swapping the lead. We were back together at 5km to go, and then at 3km to go it gets very technical on rocks and I pulled ahead.”

Robyn is too modest to say it, but she actually streaked clear in those last three kays, opening a gap of about three minutes, and she says the final rocky section gave her the edge. “I prefer the Retto, because I think I’m not as good at running, whereas I like the technical stuff and am perhaps better at skipping over rocks. Therefore, finishing on a rocky section was good for me – I don’t think I would have been on the podium if we had run in the other direction.” (In her only previous run on this trail, Robyn finished fifth in the Classic in 2013, with a time around 5:30.)

Also typically modest about her new record, Robyn says it was more down to the ideal conditions that made it possible for both the men’s and women’s records to fall. “We had very good conditions this year, so everybody went faster, because the trails were dry, the rivers low, and it wasn’t too hot. Those were record-breaking conditions. Still, last year they said it was impossible for the men to break four hours on this trail, and they put up an incentive of R100,000, but Marc Lauenstein of Switzerland came out and broke the barrier with about 30 seconds to spare, and this year he went quite well under, posting 3:54:52. I was just focused on beating the pro runners, so it is even more special that I beat a record set by a pro!”

Robyn (27) grew up in Pietermaritzburg, where her father worked in forestry and her mother gave swimming lessons. The family was always active, going on mountain bike rides and hikes, and Robyn did various sports at high school, including hockey, waterpolo and cross-country, as well as canoeing. “The school would take a bus down to the Fish River race in the Eastern Cape, so that’s how I got started in canoeing, and I went on to win a few races as a junior. I love being on rivers – the rapids are exciting and the places we paddle through are beautiful.”

She went on to dominate the Dusi, winning it five times from 2010 to 2014 – three times in a K2 boat with a partner, and twice in a solo K1, as the race alternates the class each year. Robyn’s younger brother Lance is also a great canoeist, and they are the only brother-sister combination to both win the K1 class at the Dusi in the same year. “The Dusi is special for me because it’s a big thing in Pietermaritzburg. I also really enjoy the extra dynamic that the long portages introduce, where my running strength helps a lot.”

Even so, she surprised herself when she finished on the podium at the 2013 Jonkershoek Mountain Challenge in Stellenbosch. The race doubled as the SA Long Distance Mountain Champs, and that saw her selected for the SA Team for the World Long Distance Mountain Running Champs in Poland later that year. “World Champs was a good experience and I had a good run. I came 24th and was the highest SA finisher, but I was still ridiculously far out of contention, about 45 minutes behind the winners,” says Robyn.

For the next few months Robyn focused on finishing her degree in civil engineering at Stellenbosch University, graduating in March 2014, and then she went travelling for just over a year with then fiancé, now husband Mike, visiting Nepal, the UK, Morocco, Spain, France, Switzerland, and working for a while on a ski resort in the French Alps. Returning in mid-2015, she took up adventure racing, joining Team Merrell Adventure Addicts, for races in Swaziland, Australia and Brazil, and then they headed to Chile in February for the 612km Patagonian Expedition Race. “The weather in Patagonia was extreme – rain, cold, four seasons in one day, very dramatic – but our team came third out of the only four teams that finished, out of 26 that started! It was extremely tough, and wild… sometimes we got the feeling that we were the first people to ever go there!”

After that Robyn decided to take a break from adventure racing, but then Jeannie Dreyer of Team Sanlam Painted Wolf got injured and the guys in the team, Andre Gie and the Collins brothers, John and Mark, needed a replacement for the Expedition Africa event, since AR teams must have one woman in the foursome. They went on to win the race, which in turn meant they qualified for the AR World Champs in Australia at the beginning of November, along with the Merrell Addicts. And after 300km of mountain biking, 130km on foot, 120km of paddling and mystery disciplines, the Painted Wolves finished fourth out of 99 teams at World Champs, thanks to an incredible sprint finish to pass an Australian team just before the finish line!

Planning for the Future

Now that Robyn is back from Australia, she plans to put more time into the new business she and Mike have launched, For the Love of Adventure, offering guided hikes or trail runs around the Stellenbosch area, but also as far afield as the Cederberg. “We can also do overseas trips on request, going to places we discovered on our travels. My civil engineering degree is the back-up plan, and I might go back into that field later, but for now that’s not where my passion lies. Mike is still working as a lecturer in mechanical engineering at the University, but ideally we’d like the business to take off in the future so we can both go full-time with guiding.”

Looking ahead, Robyn has her sights set on the Coast to Coast Challenge in New Zealand in February, a gruelling solo multi-sport event that includes trail running, mountain biking and paddling, but she is also thinking about running competitively. “I already have my 2017 Otter entry thanks to winning this year, and there’s a big incentive to go under 4:30, just as the men were challenged to go sub-4:00. There may be R200,000 up for grabs for the two records! It’s not about the money, but it is nice to have a target to aim for, and beating the record this year has got me thinking about taking trail running more seriously. I have never thought of myself as a good runner – I rather saw myself as a good runner, for a paddler – but I am keen to try a few more big events and let’s see what happens.”