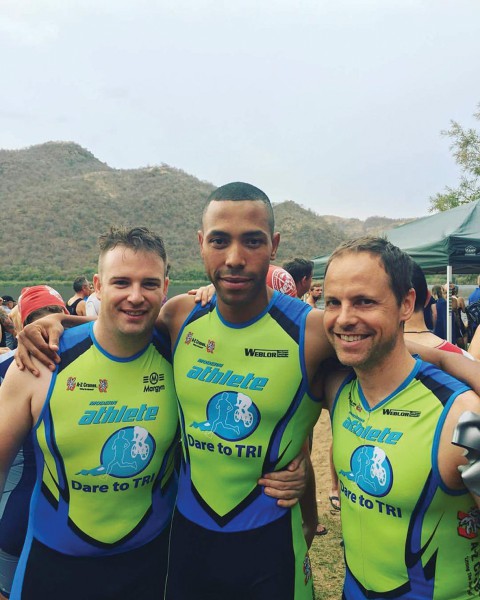 This month we put the spotlight on Modern Athlete DARE TO TRI Programme triathlete Claire Malik, who came back from the disappointment of having to withdraw during the run leg of the 2014 Ironman in PE, to successfully complete the event in 2016. As the saying goes, “Ironman does not build character, it reveals it.”

It all started in 2013 when Claire was reading a copy of Modern Athlete and saw the monthly DARE TO TRI article. That was enough to get her hooked. “I contacted Coach Derick and joined DTT right away, even though when I started I could not run for more than 5km, never mind complete a triathlon! Joining DTT was great for me, because I met like-minded people, made a few close friendships, and training was fun and exciting,” says Claire.

“Derick put me on a programme that allowed me to grow from strength to strength, from completing sprints to standard distances and then a few 70.3 distances. In 2014 I attempted the full Ironman, but pulled out after 25km of the run. Hanging my head in shame, I dragged myself back to the hotel, extremely disappointed and having learnt that a full Ironman can really humble you!”

That saw Claire decide to take a break from the Full Ironman and instead concentrate on improving her running and getting her time for the 70.3 to less than six hours. But the call of the Full Ironman just got stronger, and this year she returned to Ironman Port Elizabeth and went on to not only cross the finish line in a fast 13:12:49, but she was also the first DTT woman home, with one of the fastest bike times of all DTT finishers! “One of the most important lessons I have learnt through DTT is that consistency is key, and I was absolutely thrilled when I completed Ironman this year,” she says.

Claire’s day job sees her performing the demanding role of owner of A to Z Cranes, which she brought on board with DTT as one of the sponsors of the programme in 2014, an she says she is both proud and grateful to be part of the DARE TO TRI Programme, both as a sponsor and a member. “The camaraderie at every event is incredible, seeing our green machines out on the course and rooting for each other. It’s a fantastic group and has become a great family. I look forward to the many wonderful years ahead as both a sponsor and a participant with DARE TO TRI, and to many more Ironman finishes! See you at the start of Ironman PE 2017!

The Modern Athlete DARE TO TRI athletes showed their fitness levels at recent events, the Global 11 triathlon, Amashova cycle race and Sun City Swim. As a coach, it is really fantastic to see the improvement our athletes have made since joining the programme, and the DTT weekly training mail is eagerly awaited by everybody who is part of the current DTT group of 52 athletes. As one of them told me recently, “It’s the highlight of my Mondays and motivates me to train consistently during the coming week.” Then weekend training is the time we get together to train hard, share a few laughs and socialise while getting fitter and stronger in the process!

We had a good turnout at the Global 11 Sun City event on 15-16 October, with 13 DTT finishers. We had two podium finishers, which proves that the programme is not only for novices: Roelien Britz finished second in the women’s 40-44 category, and Deborah Quinn was second in the women’s 50-54 group. Our visually impaired athlete Helen Webb finished both the Sprint on Saturday and Standard on Sunday with her guide Heather Horrocks, winning their Para-tri division, and novice Jono Maxwell finished his first ever triathlon!

The DARE TO TRI training is now fully focused on the following events in 2017:

Registration for the Modern Athlete DARE TO TRI Academy will be open till the end of December. Join the Modern Athlete Dare to Tri Academy from just R1265 once off payment. You will receive expert coaching and group training from when you sign up till Ironman PE in April 2017. Go to https://daretotri.canbook.me/e/view/10091 and follow the prompts to register, or contact derick.marcisz@stemcor.com for further information.