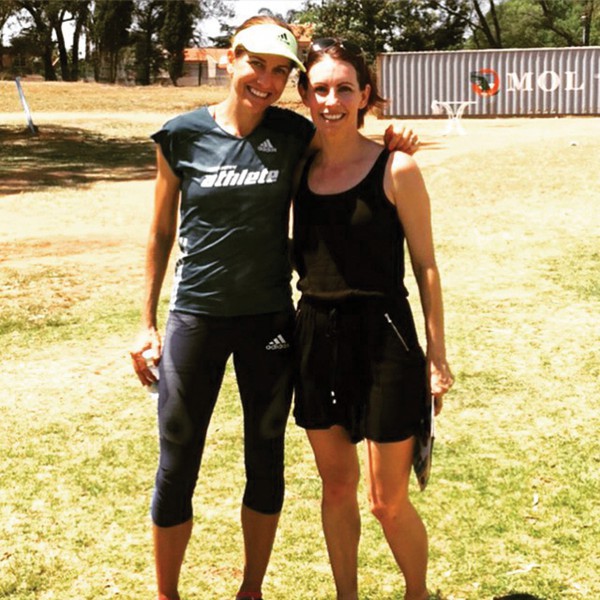 I have found that heroes come and go, but legends live forever!– BY RENÉ KALMER

When I grew up, the only interaction I had with my sporting heroes was collecting signatures at major events. I still have my little pink book with the signatures of Elana Meyer, Zola Budd (later Pieterse) and Gwen van Rensburg (later Griffiths) in it. If I was lucky enough, a signature was also accompanied with a poster, and I had Elana, Zola and Hezekiel Sepeng’s posters on my wall.

As you can imagine, I was over the moon to be on the same national team as Zola when I was 16, representing South Africa at the World Cross Country Championships in Stellenbosch. A year later I got the opportunity to travel to Europe with SA’s track and field stars like Hezekiel, Hestrie Cloete, Johan Botha and Burger Lambrecht, and that was just the start of me living a dream! Then in 2010 I made the switch to road running and this gave me the opportunity to meet and connect with SA’s best road runners.

So I went from being a fan to being part of the elite athletics scene, and these days I’m truly grateful for my fans. However, I used to think that one only had fans and supporters because you ran fast times and regularly won races, but this year my supporters really proved me wrong. I was overwhelmed by all the messages of support from fans, and even the media, after the London Marathon, where I failed to qualify for this year’s Olympic Games due to injury.

I love that social media platforms allow me to interact with my followers, and I often get requests from fellow runners via Facebook to help them with training programmes. I am not a professional coach, but am always willing to give advice and share my experience, or suggest a coach in their area that might be able to help them. It is one of my long-term goals to qualify as a middle distance coach, especially for school kids… but at this stage I’m still trying to overcome the huge challenge of getting my hubby, Andre, to train properly, as he only trains 60km a week in peak training for Comrades and Two Oceans!

Over the years I’ve also had a lot of requests from kids for school projects, and I always assist with a big smile, as I just imagine if had had the opportunity to ‘stalk’ Elana or Zola on Facebook back in the days when I grew up. I’ve also had some weird requests via Facebook, though, like a guy from Eritrea who wanted to come stay with me and train with me. Oh, and one of the gifts from a fan that also stands out is a black coffee mug. When you pour hot water in it, a picture of me appears on the side, along with a red heart and the name of the guy. Christine used to get a kick out of offering coffee to Andre in this mug whenever he came to visit me at my parent’s house!

I realise that being a role model for fellow runners comes with a great responsibility, so I try to keep my social media posts real, reflecting “the good, the bad and the ugly” of running. Races often don’t go according to plan and sometimes I feel that if I don’t post about a bad race, training session or injury, then they don’t exist, but it is posts like these that fellow runners can often relate to most. The bottom line is that I aspire to be the type of role model that my children will also look up to one day, just as I looked up to my heroes.