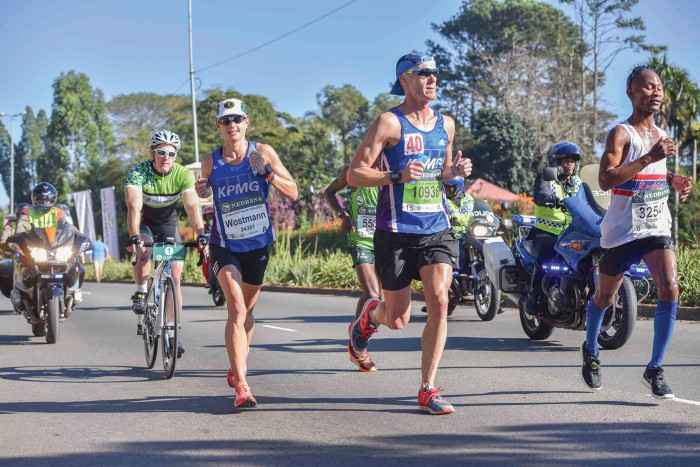 From elites to weekend warriors, many athletes do not know the rules of athletics that cover all the running disciplines, and this sometimes leads to a clash with authority, or fellow runners. This month we look at assistance to athletes in road races. – BY SEAN FALCONER

One of the most popular aspects of running is that it allows you to compete against fellow athletes, or the clock, or yourself – no teams or equipment, it’s just you and your legs, and how fast you can go. However, there are a few rules that govern the sport when it comes to the assistance an athlete may or may not receive, which could help them to run still faster.

Let’s start with pacesetting, which is a popular part of the South African running scene, especially in the large ultras like Two Oceans and Comrades, where volunteers carry flags denoting what their target time is and fellow runners can join their ‘bus’ and let the pacesetter ‘drive’ them along at a set pace. Strictly speaking, the ASA rules for road running prohibit pacing in road races:

ASA Rule 20.3: Physical assistance in Road Races
1. Pacing (non-competitive running), defined as someone running alongside another competitor to help him/her, is not allowed. To avoid pacing in road running meetings, the meeting organiser may employ separate or staggered starts. The timing of the starts will be determined by course logistics and will be set by the technical delegate in consultation with the course measurer.
2. The following is also considered as pacing and is not permitted:
(a) A pacesetter that is not a bona fide entrant in the race.
(b) An athlete that is about to be lapped, running with athletes in leading laps.
(c) Athletes that re-join the race after having temporarily retired.
(d) Athletes that do not start with the other athletes.
(e) Where staggered starts are not implemented, pacing is not allowed between age or gender categories when either runner wants to be eligible for any prize award.

That last one (2.e) covers male athletes deliberately running with a female clubmate, friend or partner to help her go faster, either by pulling her to a faster time, coaching/advising her, handing her water to save time at refreshment stations, or running directly in front of her to protect her from the wind. If that woman were to win the race or finish amongst the prizes, she would have done so with an unfair advantage over other female athletes who did not have a dedicated faster male pacer. Of course, this is hard to police in a race, where a female athlete could simply tag onto an unknown faster male athlete to gain the same pacing benefits, but when the pacer is obviously linked to the female athlete, the race officials will often tell them to run apart.

However, it is generally allowed for runners outside of the prize money or podium positions to be paced, as this is considered non-competitive social running, so, for example, the Sub-4:00 bus in a marathon, or the Two Oceans sub-7:00 and Comrades sub-12:00 get-you-home buses are left alone by race officials. These buses are not always popular with all runners, as they can grow quite big and thus block the road, but as far as we know, no pacesetters of these buses have as yet been warned or disqualified by race officials for illegal pacing.

On a related note, this is partly why there are also strict rules regarding athletes being given refreshments during an event, so that no athlete can get an unfair advantage over other athletes, especially in the case of elite or professional athletes who have coaches or support crew on the route:

IAAF RULE 240.8 Drinking / Sponging and Refreshment Stations
(e) The Organising Committee shall delineate, by barriers, tables or markings on the ground, the area from which refreshments can be received or collected… No official or authorised person shall, under any circumstances, move beside an athlete while he is taking refreshment or water.
(h) An athlete who receives or collects refreshment or water from a place other than the official stations, except where provided for medical reasons from or under the direction of race officials, or takes the refreshment of another athlete, should, for a first such offence, be warned by the Referee, normally by showing a yellow card. For a second offence, the Referee shall disqualify the athlete, normally by showing a red card.

As a result of all this, provinces such as Western Province have included a generic rule in their regulations to cover all such incidents: