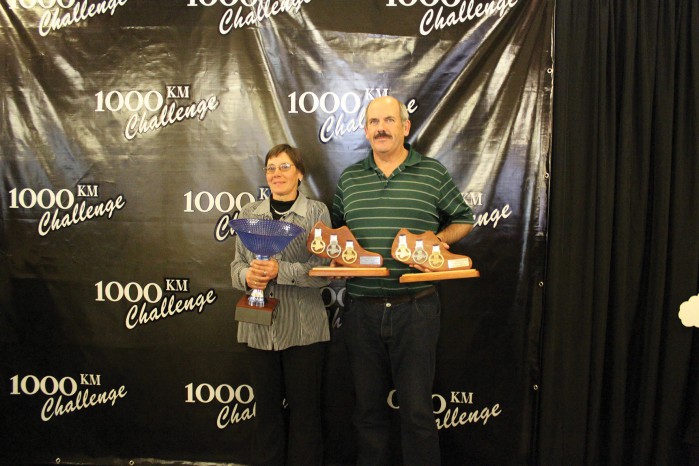 In August the prize-giving of the 1000km Challenge for 2015-2016 took place in Cape Town, with Hettie Fourie winning the Lady of the Challenge award with 4006km of mileage in official events, and husband Gerhard Fourie placing second in the men’s category with 4445km. What makes these totals all the more impressive is they did it all by walking, which means they couldn’t do many of the marathons and ultras on the calendar. – BY RACHEL PIENAAR

In order to amass these incredible totals, the couple from Stillbaai in the Southern Cape travelled all over the country for races, often being away from home for up to three weeks at a time, or just touching base for a few days before heading off to other parts of the country for various events. This saw them visiting more than 50 cities or towns in the year, and lining up at the back of the pack in events ranging from marathons and multi-day circuit races, to any shorter distance race they could find that fit into their travel schedule, including trail events, fun runs and parkruns.

When asked what motivates them to do so much travelling and racing, Hettie says “It’s being in nature and the camaraderie you get and the friendships you make. It’s a combination of so many things.” Gerhard adds, “Some of the highlights for me are the people you meet and the places you go to, because it gives you the opportunity to do races in different places and do something different.”

ACCEPTING THE CHALLENGE
The Johnny Kambouris Memorial 1000km Challenge was run for the first time in 1990. It was started by Jenny Kambouris in memory of her late husband, Johnny, who died tragically in a motor vehicle accident in 1989. Jenny married Paul Selby in 1996 and together they kept the challenge going for 20 years, challenging runners, walkers and wheelchair athletes to complete 500km or 1000km in road or trail events, from the day after the Comrades Marathon to the following year’s Comrades (although doing the Comrades itself is not compulsory).

Today the 1000km Challenge offers special incentive medals, trophies, distance badges and permanent numbers for the more competitive athletes, but for most it is about the camaraderie and motivation of taking on the challenge. And as you can see from Gerhard and Hettie’s final tallies for the 2015-2016 Challenge, some athletes really do go the extra mile for this competition!

It was an injury that inspired Gerhard to sign up for the 1000km challenge for the first time in the late 90s. “Initially the concept was very interesting to me and I did it because of a knee injury, to motivate me to get going again,” he says. A few years later in 2004, when the kids were all grown up, Hettie joined him and they have been walking together in nearly every race since then, and normally finishing together as well. “There are one or two races that he breaks away in the last kilometre, but most of the times we are shoulder to shoulder all the way,” says Hettie.

The added challenge for Hettie is making the cut-offs in longer races, which means that she needs to do all the shorter races to still amass such a huge total of mileage. “Gerhard walks the marathons, because I haven’t made the cut-off times as yet, but I take part in the half marathons and circuit races as well.” She says that they aim to walk below three hours in the half marathons, while Gerhard aims to walk a sub-six in full marathons.

HIGHS AND LOWS
In between all the travelling and walking, Gerhard works as a technical specialist at a bank and Hettie is a home executive. To date, they have racked up over 25,000km and 15,000km in racing mileage respectively, and have experienced many ups and downs along the way. Gerhard says one of the highlights of the past year’s Challenge was taking part in the Capital Classic six-day circuit race in Pietermaritzburg, in September last year. He completed 332km and Hettie did 305km. “It was a good race. The days went very well and straight after that we came through for the Cape Town Festival of Running 50km. That was probably one of the best memories, because it was a good week,” he says.

Of course, it is inevitable that sometimes things don’t quite go to plan: “I had a bad experience at the Soweto Marathon last year, because I had a difficult day and missed the cut-off, but it happens sometimes,” he says. He admits that it has also become a bit of a ‘healthy addiction’ for them: “It is a motivation to get up in the morning and do the races instead of sleeping in… I realise, in a way, the races can become addictive, because you get withdrawal symptoms if you can’t go and do a race!”